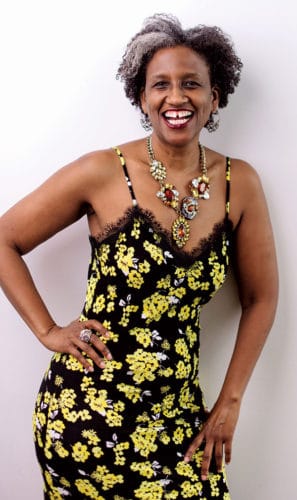 In Generation, Pamela Woolford’s debut as a filmmaker, an elderly woman looks back on her life, telling a story. She seems to be on a porch, indicated by the play of light and the glimpse of clapboard. The image on screen shifts to one of a younger woman who is also telling the story—or maybe a different one—but not with words. At least three more stories are told within the narrative—fragments alluding to the work of Marcel Proust, O. Henry and Guy de Maupassant. These elements flow into a visual and aural narrative through the lens of three generations of African-American women.

“Storytelling is the way we communicate with each other,” says Woolford, of Columbia. “Stories are the background music to our lives.”

Woolford’s film is making the rounds at film festivals in the U.S. and abroad, including London, Tokyo and Stockholm and winning awards at some of them. Generation took the jury award for the category “best experimental film, animation film or music video” at the North Beach American Film Festival in North Beach, Maryland.

The award was a surprise, she says, because animated films were in the same category as experimental, and one of them was Sgt. Stubby: An American Hero, with characters voiced by big-name actors, including Helena Bonham Carter.

“I’d seen the trailers for the animations, and I figured I didn’t have a chance,” she says. “It was a spectacular way to start my run with this film, winning that award.” 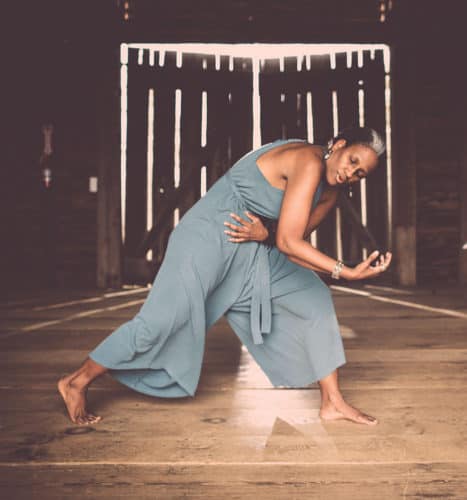 Pamela Woolford dances in the barn at the Howard County Conservancy. The barn’s exterior was one of the locations she used in her film Generation.

In her film, Woolford performs on camera as dancer and actor. The narrator reads an adaptation of the filmmaker’s own short story, “Just After Supper,” which was published in 2016 in Origins Journal and can be accessed via the website, pamelawoolford.com. Last year, author Mark Wisniewski nominated Woolford’s short story for a Pushcart Prize.

Generation was inspired by her mother’s stories of growing up in North Carolina in the 1930s-50s, when a library van brought books to her rural community, stopping at each individual home. A female African-American voice retells some of the stories from classic literature, in the context of a more personal story of surviving domestic abuse and finding joy, while Woolford performs the story onscreen through dance and facial expression.

Woolford loved the fairy tales her mother would read to her at night, but her appetite for these stories exceeded the supply, so her mother drew upon the classics she had read during her life.

“I grew up thinking that O. Henry and Guy de Maupassant were children’s writers,” Woolford laughs. She pays homage to the O’Henry story ‘The Last Leaf,’ about an aging artist who saves a young girl dying of pneumonia with the realistic rendition of an ivy leaf—even at the expense of his own life. The story, she says, meant a lot to her when she was a child.

Woolford has lived in Columbia since she was 2 years old, minus a few years in New York City after college and, later, Washington, D.C., and the surrounding area. On the road to becoming a full-time artist, she worked in public relations and development for nonprofit organizations and in journalism. She co-founded and edited Howard County’s Jambalaya magazine in the 1990s, celebrating the diversity of people of African descent, and wrote about east Columbia as a community correspondent for the Baltimore Sun Howard edition.

Her parents were active and well known in Howard County and, not surprisingly, also part of its creative community. 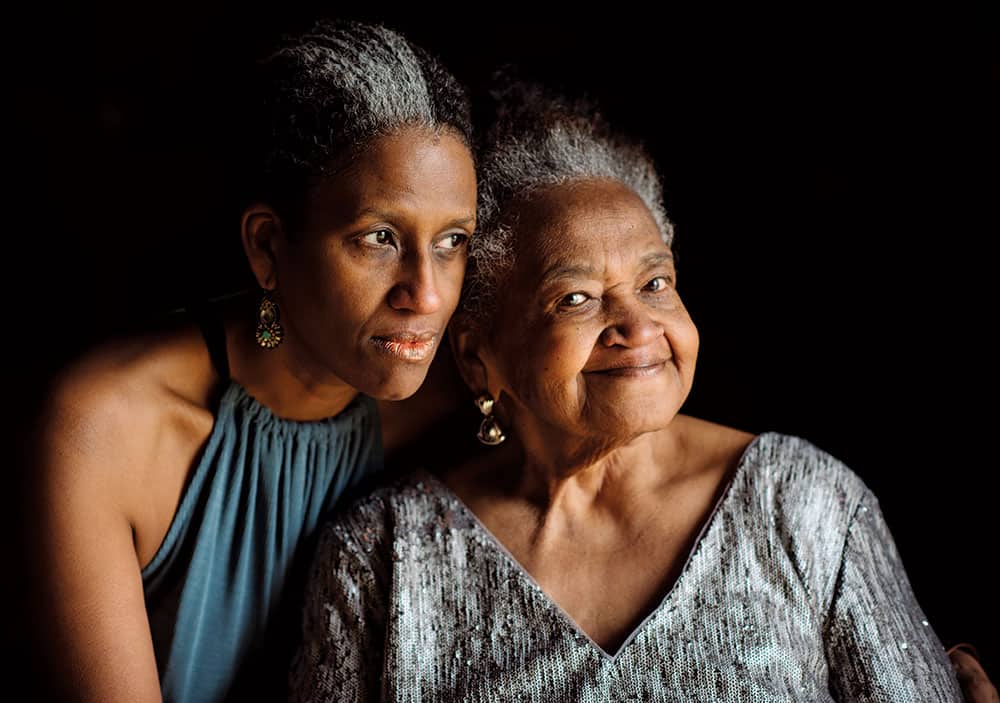 Pamela Woolford was inspired by the women in her family, including her mother the Rev. Sadie Woolford, who co-founded St. John the Evangelist Church in Columbia.

Her mother is the Rev. Sadie Woolford, a writer and an associate pastor at St. John the Evangelist Baptist Church, which she co-founded in the 1970s in Columbia. The Rev. Woolford is executive producer of her daughter’s film.

Both Sadie Woolford and her late husband, Llewellyn Woolford, Sr., were active in community theater, and he had studied under Roscoe Lee Brown. Llewellyn Woolford was a chairman of the Howard County Human Relations Commission and a partner in the Baltimore firm Howard, Woolford and Leeds. He died in 2012. One of his partners had been married to the great jazz singer Ethel Ennis, who died earlier this year.

Sadie Woolford, a technical writer for the federal government, began to write creative nonfiction after she took early retirement in 1991. In 1996, she became a preacher—a move her daughter wasn’t crazy about.

An agnostic, Woolford says she had to get used to her mother being a preacher. “I didn’t want that for her because I probably had a stereotype about what that meant.” She admits she wasn’t sure what that stereotype was.  “We’d always been so close, and I think I wanted her to be me, in some way, which sounds ridiculous when I say it out loud.”

Making Film Out of Order

When it came time to make her film, Woolford says, she didn’t follow a conventional timeline.

“A lot of conceptualization happened early on,” she says, in collaboration with the cinematographer, Columbia artist Denée Barr.

Barr approached her with the idea of a collaboration. “She said I should dance in it,” says Woolford. “I developed the concept and brought on my mother as executive director.”

Soon Woolford came across the French African singer and beatmaker Loren The Storyteller on Instagram. She was living in Paris at the time. “I especially hoped to use music or beats by a black woman, as the story is a black woman’s story,” says Woolford.

The shooting was completed in 2016, but the work was nowhere near complete. While Woolford had hours of lush footage shot by Barr, she needed an editor to partner with to finish the film.

“I had zero experience with editing film,” says Woolford.  “I was looking for someone to be excited the way I was excited.” But the editors she spoke with turned out to be very technical and she didn’t find what she was looking for.

In 2017, she began using iMovie, which was available on her computer, to edit video for her vlog, Truth & Story. She learned how to add music and sound effects.

“I started to have a more concrete concept for the film.” Even with her hours and hours of footage, she says, “I knew it would be a short film.”

The Moving Body-Moving Image film festival at Barnard College looked like a perfect fit. “The theme was ‘the brown body,’ “ Woolford says. The festival featured a type of hybrid art form called screendance, in which a film is focused around a movement or dance performance, choreographed for the screen. It was exactly the art form Woolford was working in, even if she hadn’t yet been aware of the genre.

The deadline for submissions was about a month away.

Woolford contacted David Hester, a filmmaker and editor based in Germantown, one of the editors she had interviewed. She now knew what she wanted artistically and felt prepared to edit the film herself. Hester advised her on the equipment and software she needed, and she went on a rigorous schedule to meet deadlines for the festival.

“I told myself I was on retreat,” Woolford says. She taught herself to use the film editing software and went about realizing her vision for the film. She worked around the clock. “Pretty much the only time I left the house was to take a walk each day,” she recalls.

For her script, Woolford adapted her short story, “Just After Supper,” performed in voiceover as she moves on screen.

The voiceovers sound like two women telling the same story, slightly out of sync most of the time, occasionally merging for certain phrases.

Woolford entered the film in the festival at Barnard with not much time to spare.

It turns out, Generation wasn’t accepted into the Barnard festival, but the deadline had served its purpose by forcing Woolford to complete the project. She submitted the film far and wide, including the North Beach festival, which is set in an idyllic town with much opportunity to connect with fellow filmmakers.

The 2018 North Beach American Film Festival was the first to selected Generation, and it was also the first to screen the film in June 2018.  “It was a glorious weekend,” Woolford recalls.

The storytelling continues. Woolford recently received a Maryland State Arts Council Creativity Grant for her latest project Carter, Clinton, Trump: A Mem-Noir, a hybrid memoir, audio recording and  exhibition with augmented reality. And in early spring, both Pamela and Sadie Woolford learned that pieces they had submitted for publication in the same anthology had been accepted, independent of each other. Sadie’s piece is about her mother, Pamela’s grandmother Carrie. “It was selected for an anthology of powerful writings by black women to be published by the writers’ group Zora’s Den,” Woolford says. Carrie was the inspiration for the mother in Woolford’s own story “Just After Supper” as well as the film Generation.’

“Now there’s even more symmetry with our stories, marked by the soul of my grandmother,” Woolford says. “Carrie, taking flight!”

Where and how to see Generation

To see if there are any upcoming local screenings, check Woolford’s website, pamelawoolford.com.

The film will be shown next year at the Healing Arts Gallery at the Smith Center for Healing and the Arts, 1632 U Street, NW, Washington, D.C., from October through December 2020, as part of a solo show of Woolford’s work.

Lindsey Yancich, the gallery coordinator for Smith Center’s Joan Hisaoka Healing Arts Gallery, says she was moved by the film. “Pamela’s visual and auditory expression adds layer after layer of emotion,” she says. “I love the mystery, like I had stumbled upon some secret ritual to the past.”