More than 50 years in, the visionary community continues to thrive

By Rebecca Kirkman and Beth Hauptle 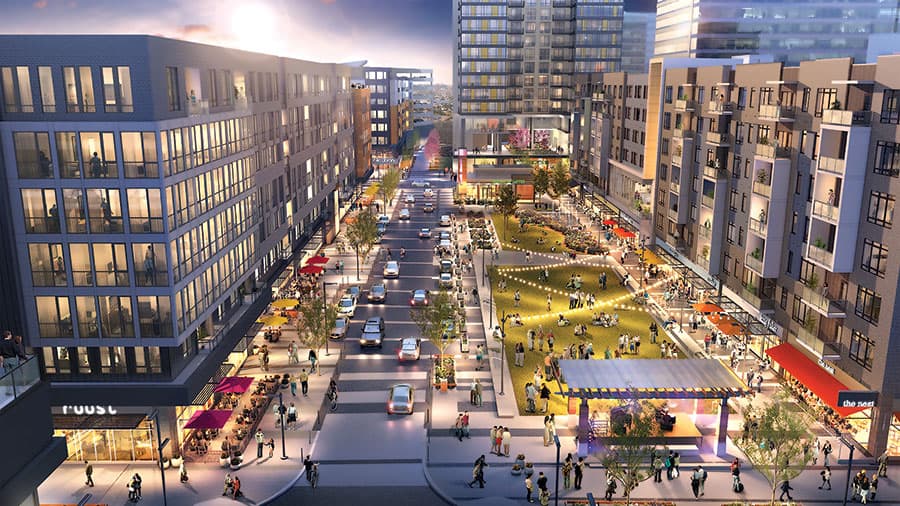 Since Columbia founder Jim Rouse declared his vision for a people-focused community that would “uplift, inspire, stimulate, and develop the best in man,” citizens—men and women alike—have been enjoying all the activities the city has to offer. Half a century after Rouse declared his vision, the city continues to build on it. The redevelopment of Columbia’s urban core has attracted new businesses, birthed new public gathering places, and re-energized the community. Now there are more opportunities in Columbia than ever before, from freshly paved walking trails and renovated parks to newly opened eateries, international festivals, and world-class music venues. 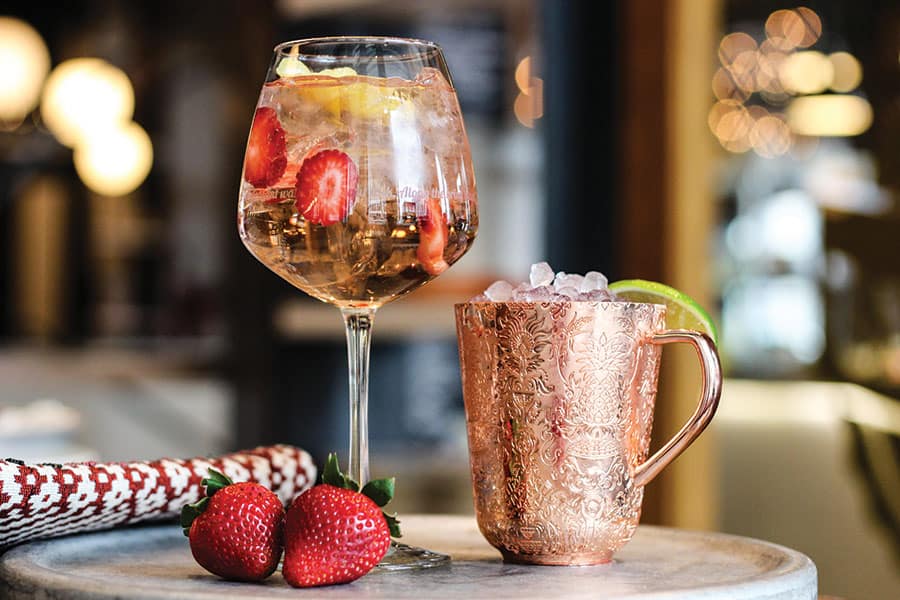 These days, an exciting night out in downtown Columbia is easy to come by. You can sip on a smoked Old Fashioned at 18th & 21st before taking in a show at Merriweather Post Pavilion. Or meet up with friends for a dozen Skipjack oysters sourced from Tangier Sound, paired with craft beer from a nearby brewery at The Walrus Oyster & Ale House.

Columbia is looking forward to more restaurant openings and enhancements to downtown living. Starting in May 2020 Clove and Cardamom, a global fusion restaurant, Dok Khao Thai Eatery, and Maryland’s fourth location of the popular eatery, Matchbox have planned openings along with Andy Shallal’s Busboys and Poets.  The 10,000-square-foot Busboys and Poets will be an anchor of the 35-acre Merriweather District and will feature a restaurant, bookstore, and event space.

But long-time locals know it wasn’t always this way.  For about the first 50 years since Columbia’s founding in 1967, there wasn’t much in the way of nightlife in the heart of the city.

A vibrant downtown core was an important part of developer James Rouse’s vision, but several factors—including an economic recession in the 1970s—prevented it from being fully realized.

In fact, early marketing materials, created before the city’s opening, touted downtown as a cultural hub: “The heart of the city will be the home of art and music schools, theaters, museums, galleries. It will be an opportunity to learn to study painting, sculpture, to visit an exhibit, or to see a play or a film,” read one such piece, says Barbara Kellner, former Director of Columbia Archives, a part of the Columbia Association. “It goes on to talk about the nightlife, because, absolutely, that was part of the original goal.”

In the early days, community members forged their own connections and created clubs, arts events, and pre-schools. “The thought had been that women would be looking for things like art classes and coffee klatches,” says Kellner. “But this was the early ‘60s and these were, by and large, college-educated women.” When the first families arrived, she says, “There wasn’t much here.” During this period, a time of social change, Kellner points out, “Many of these women had greater ambitions for themselves and their community.”

The Columbia Women’s Center became a place where women could come together for consciousness raising circles. They gathered and shared ideas, coming up with plans with which to create the changes they wanted to see in their community.  These women started a cooperative nursery school, a women’s art gallery, an orchestra, and many of the nonprofits that continue to serve the county today.

“If you were here in the beginning, you were a charter member of everything that happened,” explains Helen Ruther, a Columbia pioneer. “If you wanted something to happen, you had to start it yourself.”

Fast forward to 2010 when The Howard Hughes Corporation (HHC) inherited control of the mixed-use town center of Columbia, now with a population of around 100,000. With the forging of a new 30-year development plan, the groundwork was laid to allow this community to soar into the future while standing firmly upon Rouse’s vision: “Downtown Columbia will be a diverse, mixed-use, livable, physically distinctive, and human-scaled place with a range of housing choices and recreational, civic, cultural, and educational amenities.” The plan noted that although Columbia had been successful in providing options for people of all income ranges, the downtown is “still primarily suburban in nature … sparsely populated … automobile-dependent and separated by vehicular thoroughfares.”

The development plan was amended again in 2016 and the revision allowed for the transformation of the town center into a true urban environment with some 13 million square feet of new residences, retail, and commercial space. It provided for a new arts and cultural center, library, fire station, transit center, and elementary school as well as a $51 million parking structure.

From construction to culture and entertainment 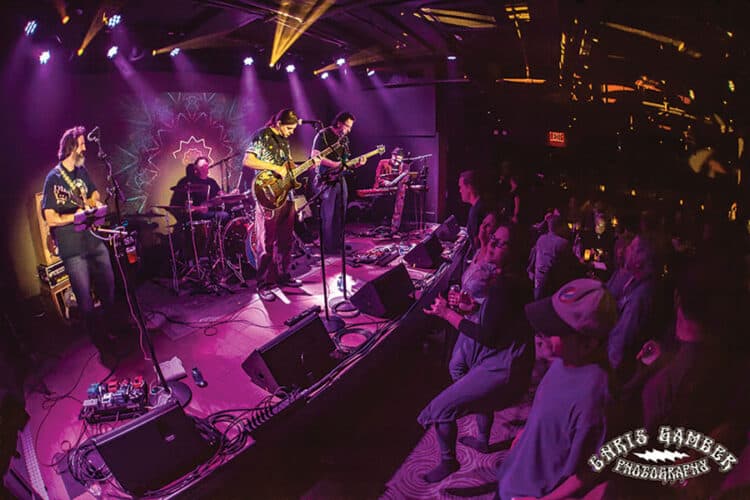 It takes more than new buildings to create a downtown. At least, that’s the stance of Ian Kennedy, president of the Downtown Columbia Arts and Culture Commission, a nonprofit formed in 2013 to enhance the vibrancy of downtown through cultural activities.

“What was missing from this city, but we’re starting to see more of it, is that center of gravity, that pull toward a place where the community comes together around the arts, around entertainment, around community life,” says Kennedy, whose organization received ownership of Merriweather Post Pavilion in fall 2016.

“We’re trying to take what was great about Columbia’s culture and founding values and reimagine them for the next 50 years,” he says. “Downtowns are where things are happening, and we’re trying to make things happen.”

With Merriweather Post Pavilion under its purview, the commission is working to bring a mix of programming to the venue that will appeal to locals as well as attract visitors. “It should be a home for great commercial, contemporary music shows, but it should also be a home for the sort of cultural programming that was promised 50 years ago,” says Kennedy. “And I think people also have the same feeling about downtown—like, there should be more there.”

With that in mind, the commission hired Darin Atwater as its artistic director. Atwater brought his Soulful Symphony—an 85-piece orchestra that counts R&B, hip-hop, gospel, and other genres of music in its repertoire—with him to Merriweather Post Pavilion as its resident orchestra. “To me, it’s sort of a realization of that original vision for the venue,” says Kennedy.

It’s one step in the larger journey to bolster downtown Columbia as a hub of culture and nightlife. “For the longest time, you could basically describe downtown as the mall and Merriweather, and maybe if you really knew Columbia you would say something about the Lakefront plaza or Clyde’s,” Kennedy points out. “Before June 2018 there was one music venue in downtown Columbia, and it just happened to have a 19,000-person capacity.”

The opening of The Soundry, from the group behind Clyde’s and The Hamilton Live in D.C., offered a new type of entertainment experience for the community. With a 300-person capacity for standing shows and 200 for seated experiences, The Soundry serves street food-inspired fare and craft beer made locally.

It’s a good sign of downtown’s potential, says Kennedy. His hope, he says, is that soon Columbia will inspire spontaneous visitors. He says he wants to hear people say, “We’ll just go downtown because something is happening, and you know you’re going to find something great to do.” 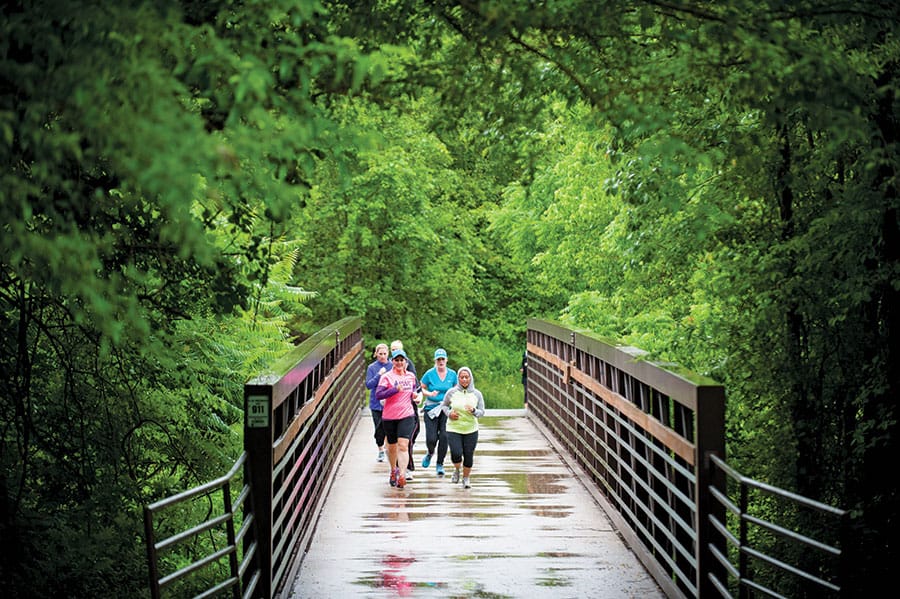 James Rouse envisioned a “city in a garden” and Columbia’s 114 miles of pathways and 3,600 acres of open space allow for outdoor recreation and peaceful enjoyment of nature.

When you add up the Columbia area’s 114 miles of pathways for walking, biking, and jogging; 34 miles of stream valleys; and more than 3,600 acres of open space, there are plenty of ways to enjoy outdoor activities. You can spend a day biking the Lake to Lake to Lake Trail (eight miles roundtrip), starting at Lake Elkhorn and taking a gradual but steady elevation climb through Steven’s Forest to Lake Kittamaqundi. The trail passes the Historic Oakland Manor before ending at Wilde Lake.

There are even more trails in the city’s future. With the $1 billion overhaul of Downtown Columbia by HHC comes an increased focus on urban living and pedestrian- and bike-friendly areas. According to the developer, the new Merriweather District aims to actualize Columbia founder Jim Rouse’s vision of “a city in a garden” with a more walkable core that includes bicycle and pedestrian pathways. The newest pathway, dubbed the Merriweather District Trail, aims to link up with the existing Downtown Columbia 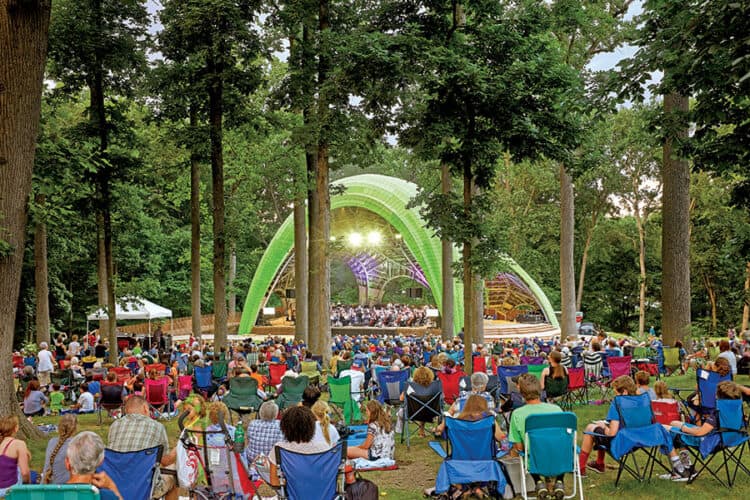 The Chrysalis amphitheater in Merriweather Park.

Trail through the Merriweather District. Download the Columbia Association’s handy CA Pathways mobile app for a GPS-enabled map of the area’s public trails, parks, recreation centers, playgrounds, and local businesses that will help you map a route from point A to point B.

It’s only fitting that Columbia continues to rank as “a best place to live” with nods from Niche, Livability, and Money Magazine. Columbia was launched by Jim Rouse’s lucid and impactful vision and has grown and developed under the stewardship of a committed and proud community.

This article was compiled by Her Mind staff from material that appeared in previous editions of Her Mind magazine.