HOW TO SHOW YOU CARE WITHOUT RESORTING TO BLEACH SPRAY

Recently I got bitten with the hat-knitting bug. “Pick out a color,” I beseeched my 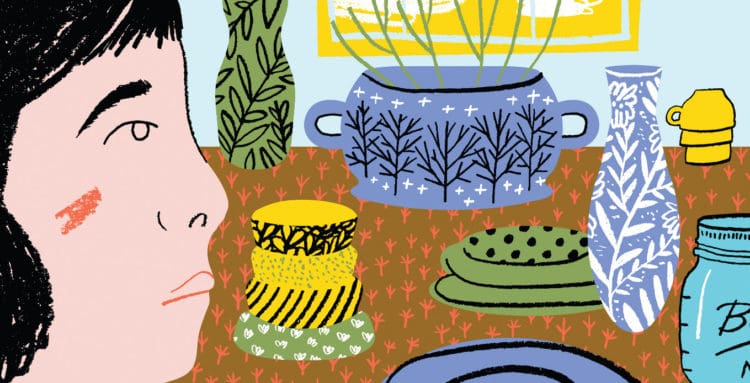 teen and tween children. When they made it clear that they had no desire to own or wear a hand-knit hat, I needed a new plan. I hit up my sister, who has three young children who are still sweet. They each picked out a yarn color for me to knit into hats for them: dandelion, peapod and surf.

My children regularly say things to me like, “Why can’t you be a more normal mom?” or “Why can’t you do more mom-like things?” Silly me. I thought that knitting hats would do double-duty of being something I enjoy and making me seem more like a “normal mom.”

I do try. But my forays into domes¬ticity are neither regular nor thorough. The rugs are rarely vacuumed, the counter is rarely clean—but there was that morning I got down on my hands and knees with bleach spray and a rag and cleaned the kitchen floor until it looked legit. My daughter walked in, looked around and said, “Wow, it actually looks nice in here. It almost looks clean.”

At 14, she’s my harshest critic. Accord¬ing to her, I don’t do much that’s right as a homemaker. My thrift store dishes are embarrassing, and my decorating style, which includes birch bark and origami cranes, would be laughable if it didn’t make her cringe so hard. She yearns for one of those homes that you walk into in the fall and there’s a dining room table with a bowl of cin-namon-scented pinecones as a cen¬terpiece. She wants our house to smell like lilies in summer and evergreen in winter. She wants that giant glass canister of sun tea with lemon slices. When I pick her up from a friend’s house, she makes sure to point out the lovely decorative touches that her friend’s mother has executed: match¬ing picture frames, for example, or a table runner appropriate for the season.

“It would just be nice if you made the house look like, you know, you care,” she says.

What I offer instead is a recycled jar full of used coffee grounds and lemon rinds, which sits next to the sink until I can empty it into the garden. “That’s just great,” she says. “Really nice, mom.”

Also on the counter is her current nemesis: a large glass canister (marketed and sold as a container for sun tea, ironically) filled with fermenting kombucha and a symbiotic culture of bacteria and yeast (also known as a SCOBY) that looks like a jellyfish gone horribly wrong. She reminds me of an episode of “Workaholics”: Blake and Karl are in the back of Karl’s van; Blake opens a glass jar and almost throws up, Karl screams, “Oh no, don’t open that,” he gags, too, and then he explains that it’s a home¬made super stink bomb containing all manner of poop and other delicacies. Blake says, “It’s almost kombucha.” Which is exactly how my daughter feels about my fermenting beverage.

I thought that knitting would gross her out a lot less and might even seem cozy and warm, more of a nest-building activity than my usual. But her vanity prevents her from appreciating it. You see, she doesn’t think a hat will flatter her face or hair. “I just don’t think I can pull off that look,” she says. (To which I bite my tongue; a 14-year-old girl is beauty incarnate, hat or no hat, but whatevs.)

I was giving up for the day on being the mother she wanted, so I asked her a frank question.
“You don’t think I’m very domestic, do you?” I asked.

And this is when the holiday miracle happened. She gave me this gift: “No, you’re not very domestic,” she said. “But you’re very maternal.”

Cautiously, because this almost sounded like it could become a compliment, I asked her to clarify.

“Well, you’re not really a mom who cooks or cleans,” she said, “but you love your kids.”

(Of course I know that I love my kids, but it was so good to hear her say it, and I wanted to hear more.)
“Well, yeah,” she said, “that’s pretty obvious.”

I was woozy with her compliment. I thought maybe it’s all right that I don’t have pinecone centerpieces.

Then she put the cherry on top of the icing: “It’s like you don’t really like to do housework because you’d rather be making something or growing something in the garden.”
Swooning, I tried to think of a way to stall. I wanted to savor and prolong the moment. “Really?” I asked. (Tell me again how much I love you, I whispered inside my throat.)

But she was done. She’s the boss and the moment was over. She had giveth and I wanted to count my blessings before she had a chance to taketh away. “Well, thank you,” I said. I stopped the car in front of her friend’s house, and in one hot second she managed to remark on what a fun part of town her friend lived in, how cute their house was and how normal her friend’s parents seemed.

“It’s okay, mom,” she said, “You’re normal enough.” And then she was off, flouncing through the door with a wreath on it. She didn’t turn around to wave—she never does—but that, I told myself, is because she doesn’t need to. She’s doing perfectly fine and that is a good thing. *