Howard County has a proven love for literature

There wasn’t an empty parking spot to be found. The line of fans curved around the outside of the building. Teenage girls waited in the lobby, hopeful there would be a no-show and that they could nab a ticket. 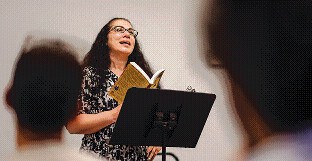 A rock concert? It certainly felt like it, but in this case, the setting was the Miller Library and the rock star was Chimamamda Adichie, the uber popular Nigerian-born novelist with crowds that follow her anywhere. When she walked on stage, tall and regal in her bright red outfit, she had her audience’s undivided attention for the next hour.

Adichie is just one of the successful authors who has called Howard County home over the years, and her popularity here is indicative of the deep appreciation the area has for literature.

That summer visit from Adichie was one of two literary events in one weekend, the second being the Books in Bloom, Maryland’s inaugural book festival, which coincided with Columbia’s 50th anniversary celebration. By most accounts, both events can trace a path back to 1972, when Ellen Conroy Kennedy moved from New York City to Columbia with her husband, Padraic.

The Kennedys liked what they saw when they arrived back then. But they also made note of what they didn’t see: culture, particularly in the area of the written word.

A National Book Award nominated translator, Kennedy made it her mission to plant the seeds of literature appreciation in her new community. Together with fellow residents Jean Moon and Prudence Barry, Kennedy was instrumental in launching HoCoPoLitSo—the Howard County Poetry & Literature Society—in 1974. Over the years, the society has fostered, grown and played perfectly to the county’s lit-crazy population. “

Susan Thornton Hobby, a local writer, editor and author, serves on the board of HoCoPoLitSo, and says that Howard County’s literature chops run deep. “When you look at the people who moved here— idealists, innovators and those who appreciate literature—you can see that it’s an attractive environment for writers,” she says. “Columbia offers possibility, and writers are all about that.”

Hobby says that over the years, HoCoPoLitSo has brought dozens of literary giants for readings and events, of which there are generally three to four annually. “The list includes multiple Nobel- and Pulitzer-prize winning authors,” she says. “We also believe in supporting programs for youth and have brought numerous writers, poets and authors into the schools.”

Other HoCoPoLitSo events include the annual Evening of Irish Music and Poetry, which will mark its 40th anniversary in 2018. Padraic Kennedy was 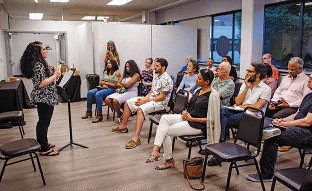 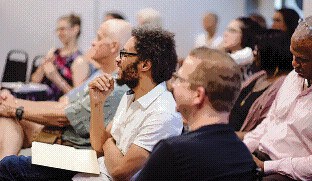 its original champion, and the event attracts some of Ireland’s top writers, combining the literature with Irish music and dance. Past authors have included Colum McCann, Emma Donoghue, Frank McCourt and this past year, Belinda McKeon, whose second novel, “Tender,” was published in 2016.

Hobby says that one year’s Irish festival looms large in her memory. “We had Colum McCann here, reading from his manuscript of “Transatlantic,” and former Maryland Governor Martin O’Malley leading sing-a-longs,” she recalls. “Later on we moved into the adjacent art gallery. I looked around to see McCann with a glass of whiskey in hand, Martin O’Malley drinking a beer, and (singer) Eileen Corn Estes holding her sleeping baby. It was one of those magical evenings.”

Howard County is also home to Little Patuxent Review (LPR), a biannual print journal and series of events featuring poetry, short fiction and creative nonfiction. Like HoCoPoLitSo, the founders of LPR recognized a gap in Howard County. “A group of 12 people gathered in 1975 to brainstorm ideas,” says Hobby, who serves as a writer/editor. “We found a young editor and we were off.”

The original LPR folded for a time in the 1980s but a group of local writers revived it in 2006. Work in the publication has included poetry from Michael Glaser, Joy Harjo and Donald Hall, and fiction from Manil Suri, Michael Chabon and Edith Pearlman. 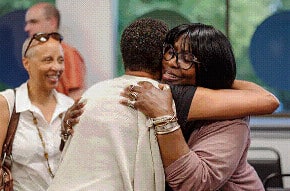 BORN, BRED OR TRANSPLANTED
Howard County serves as the birthplace or residence of many noteworthy authors over the years: Lucille Clifton, a national figure for young African-American poets and a Maryland poet laureate; Chimamanda Ngozi Adichie, a wildly popular, award-winning novelist; the authors Carrie and John a-longs,” she recalls. “Later on we moved into the adjacent art gallery. I looked around to see McCann with a glass of whiskey in hand, Martin O’Malley drinking a beer, and (singer) Eileen Corn Estes holding her sleeping baby. It was one of those magical evenings.”

Local poet/author Ellicott City-based Laura Shovan, has served as a poet in residence in the Howard County schools for the past 15 years. “I typically work with one grade at a time and spend three to five workshops with each group,” Shovan explains.

The Black-Eyed Susans
Like much of Howard County’s literary roots, Maryland’s Black-Eyed Susan awards can trace a path back to an inspired citizen’s living room. The citizen in this case was Ellicott City resident Thea Jones, and she was joined by fellow media specialists Louis Heinrich and Mary Hackman. Together, the three women recognized a need and stepped in to fill it. 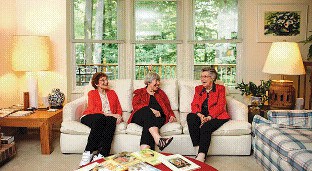 “I attended the annual Association of American School Library meeting in the early 90s and learned about a statewide reading program in Kansas,” says Jones. “I knew we needed to have something similar here.”

The three women set about to establish the Maryland Children’s Choice Award—today’s Black-Eyed Susan Award—lining up sponsorship from the Maryland Association of School Librarians. “That first year we had a category for picture books and fiction/non-fiction, for grades four through six,” says Jones. “By the second year, we added awards for grades six through nine.”

As the original name implies, Jones and company established the awards as a way to engage youth in reading by allowing them to vote from a curated list of books each year. Books must be no more than three years old at the time of nomination and voting, and students, parents, teachers or other interested readers may suggest titles to the committee. Then the hard part: choosing the books that make the final list.

For 10 years running on one Sunday afternoon each month, committee members met at Jones’ house to go over potential candidates. “Each committee member had to read at least 15 titles,” she says. “Then we’d discuss the titles and at our March meeting, whittle the list down to 10.”

Criteria for the lists include a good central idea; an appeal for the audience to which it is directed; originality of idea; good writing; and even, sure plot development; among others. Today the committee considers titles in the categories of picture books, grades four to six, six to nine, high school and graphic novels.

The committee enlisted the help of school media specialists to help grow the program and today, the Black-Eyed Susans are an ingrained part of most Maryland public and private school library curriculums. “We created activities for the librarians to help engage the students and promote the program,” says Jones.

While Jones gave up her role on the committee three years ago, she helped set in motion a lasting legacy of reading among the state’s youth. “When we first got started, we didn’t think about the program’s growth, we just wanted to promote the idea of reading for children,” she says. “We can never do enough to get good books into the hands of kids.”

Inspired by her time with these students, Shovan authored “The Last Fifth Grade,” a novel in verse that follows a fifth-grade class attempting to save its school from a threatened closing. “The book was six years in the making and is very much related to the work I do here in the county,” she says.

The county figures large in her current project as well. “It’s called ‘Take Down’ and is set here, loosely based on my son’s experience as a wrestler,” she explains.

Like Kennedy before her, Shovan recognized a hole in the county’s literature scene and over the past year helped launch Wilde Readings, a combination of author reading and open mic event. Working in conjunction with Ann Bracken, Lind Joy Burke and HoCoPoLitSo, Shovan hosted 10 events at the Columbia Arts Center. “I wanted to have something more grassroots here,” she says. The popular series is expected to return this fall.

The written word has also launched a romance or two over the years. Hobby met husband/ photographer David Hobby through Patuxent Publishing Co., and authors Carrie and John Gregory Brown met there as well.

Together the Browns have numerous published books between them and teach at Sweet Briar College in Virginia. “Columbia has a tremendously engaged community,” says Carrie Brown. “You can find great audiences and book clubs all over.”

Like Shovan, Brown says that her time in Columbia has influenced her work over the years. “My first novel and short stories in particular,” she says. “I still come up for readings and taping through HoCoPoLitSo, and I greatly enjoy the vibrant literary community.”

Nearly 50 years ago, Ellen Conroy Kennedy probably never imagined that her new community could evolve into the deep literary well that it is today. But by recognizing a need and investing her blood, sweat and tears, she can now reflect on a job well done. *