A cadre of Howard County beekeepers make sure pollinators can proliferate 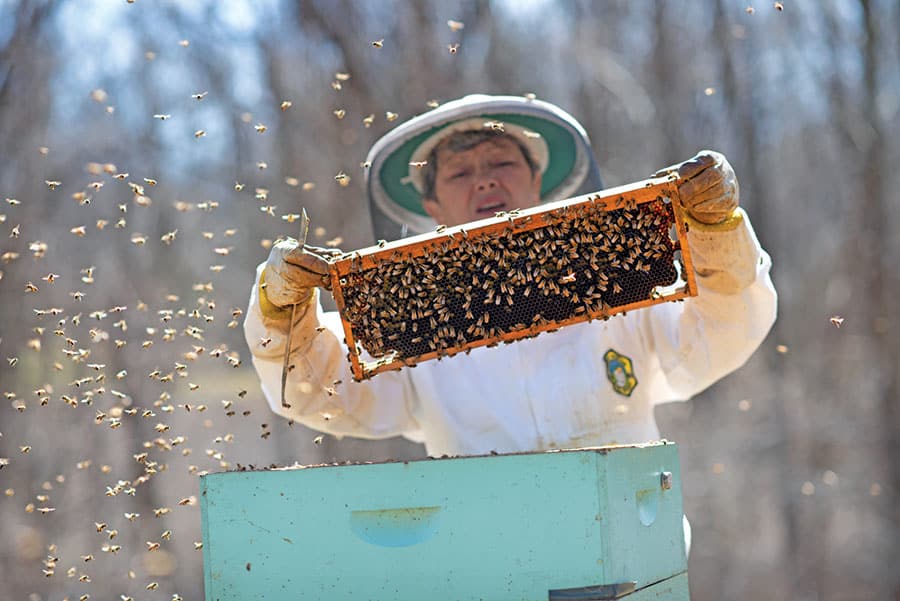 Alice Parks, who keeps bees in West Friendship, is the superintendent of the Honey and Beeswax exhibit at the Howard County Fair. Here, she inspects a frame at one of her hives. 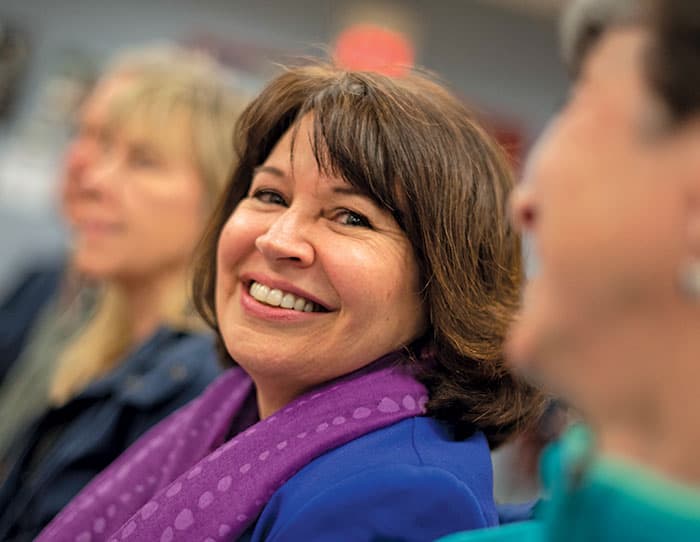 But she’s performed one more job that’s not exactly typical of your average beekeeper: “b-EMT.”

Her most memorable rescue came when she received an emergency call from Jason Ellis, the president of the HCBA, who happened to also be a Howard County police officer. After overhearing on his police radio that the fire department was en route to fumigate a honeybee swarm on an abandoned tractor trailer on I-95, Ellis called in a stop order, and then called Walsh, who was closer to the site than he was.

Could she get over there right away?

She could, and she did. At the truck she donned protective gear—gloves, hat, veil, and body suit—and used feathers to sweep the bees into buckets.

“Once we got the queen, they all followed,” she says matter-of-factly, as if persuading thousands of bees to follow you like an apiarist pied piper is as simple as sweeping breadcrumbs off a cement floor.

But Walsh—who saved approximately 20,000 bees that day—knows that protecting Apis mellifera, the European honeybee, is anything but simple. And she knows that protecting and nurturing honeybees extends far beyond rescuing swarms and keeping hives of her own.  For Walsh, keeping honeybees buzzing also means educating as wide a swath of society as possible about their plight. 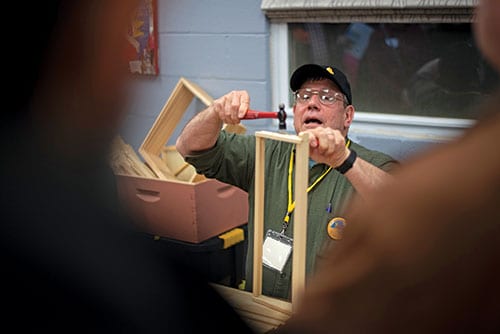 Dave Dobbs, president of the Howard County Beekeepers Association demostrates how to assemble a frame.

Since then she has worked with Howard County master beekeepers Allen Hayes and Wayne Esaias to offer a course that attracts aspiring beekeepers from around the state. The program fills to capacity every year.

Winter 2019 was no exception. At the first class, held on a frigid night in February at the Howard Country Fairgrounds, the room buzzed with excitement. More than 100 workshop attendees from Howard and surrounding counties crowded the long tables in the fairground’s dining hall, as they flipped through bee-adorned swag bags, supply catalogues, and fat binders loaded with resources. They all chatted excitedly about their plans to tackle the art and craft of beekeeping. 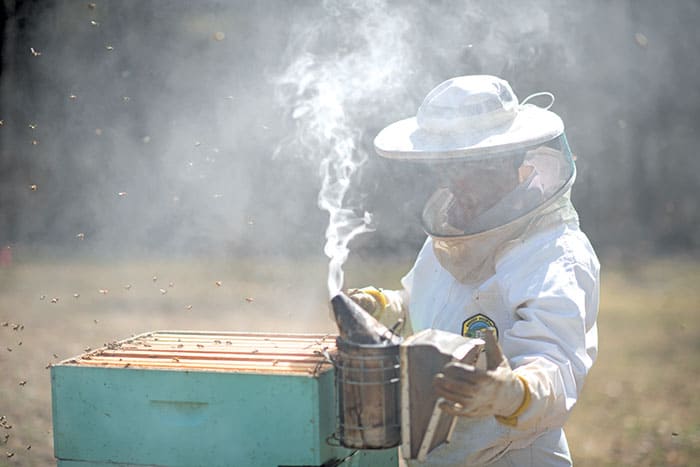 Alice Parks uses her smoker to calm the bees.

Equipment that beekeepers need—hive boxes, hive stands, screened bottom boards, and outer and inner hive covers—was displayed on one side of the room while across the way, members hawked raffle tickets and called out prizes: a free package of honeybees, a hive kit, and even a Beekeeping Barbie.

When Walsh took the floor, she smiled widely and posed a question that seemed to strike at the core of every potential beekeeper’s heart: “Why keep bees?” she asked.

Along with teaching, Walsh never misses an opportunity to educate people about bees, whether it’s visiting an elementary school classroom, mentoring new keepers, or telling a stranger in the dentist’s office to think twice about spraying for mosquitos. It’s hard to imagine a time that Walsh was not a beekeeper. But, like many other keepers, Walsh, who has a degree in horticulture, fell into beekeeping because she was in search of pollinators after a poor garden harvest at her new West Friendship home. “I knew it wasn’t my growing skills,” she says.

She noticed ample clover in her yard, but few bees. Her suspicion that lack of pollinators might be the problem was confirmed when she consulted a beekeeper map at the Howard County Conservancy. Bees forage three to five miles from their hives, and on this map, dotted with pins of all the local beekeepers, sat a big hole overlaying her property.

Although U.S. honeybee populations have been in steady decline since the 1950s, it was in 2004 that beekeepers noticed a steep loss in their hives.  A few years later, U.S. beekeepers opened their hives to find them completely empty. The situation was called Colony Collapse Disorder (CCD). One upside to this catastrophic loss was the concurrent spike in public awareness and interest in helping honeybees, much of which explains the high numbers of attendees at the Howard County class.

Research and improved beekeeping practices have helped reduce hive casualties, and CCD is now rare, but U.S. beekeepers continue to lose 30-40 percent of their hives annually. At an informal beekeeping class in April, beekeepers introduced themselves with sobering statistics: each noted the percentage of hives they had lost over the winter.

Walsh listened carefully, but afterward chose to reframe the issue.

“Ask a different question,” she suggested. “Not how many did you lose, but how can we keep them healthy?”

It’s a question that’s hard to answer, given that the decline in honeybee populations results from some combination of the four P’s—pesticides, pathogens, parasites, and poor nutrition. Scientists have found it difficult to tease out which is most to blame. Most scientists do agree, however, that these pressures act in tandem. For example, parasites such as Varroa mite feed directly on bee tissue, while pesticides sprayed on bees’ food sources weaken the bees’ immune systems, leaving them susceptible to viruses spread by Varroa and other pathogens. Poor nutrition, caused by loss of foraging habitat and intensive, mono-cropped agriculture, further stresses the bees’ health.

Despite the lack of a definitive answer and the risk of hive loss, people do want to help. Providing a home and habitat for honeybees is one way to do so.

The fringe benefits of having bees are not to be overlooked: pollination to help gardens grow, honey, and the numerous by-products of wax such as candles and lip balm.

Stacey Floam, a self-identified foodie who attended the beekeeping course says, “The more you learn about honeybees, the more you realize how amazing they are.”

Delve into the organization of a honeybee hive and you’ll agree that it’ a hard statement to dispute.

While most other bees—bumblebees, carpenter bees, mason bees—tend to be solitary or group in small nests, honeybees live in colonies of 10,000 to 60,000, creating a superorganism: a democratically organized society that prioritizes the needs of the colony over the needs of each individual.

At the heart of this functioning superorganism are the worker bees—all female, by the way—who change tasks throughout their lifespans via a process known as temporal polyethism. When a worker bee emerges as an adult, her first job is to clean and polish the cells of the hive. As she ages, she transitions first into an “undertaker” removing dead larvae and bees and then to a “nurse” bee, feeding the surviving larvae and tending to the queen. In later life, she moves on to “food storage,” receiving the incoming nectar, and then finally transitions into a forager, retrieving nectar, pollen, resin, or water for the hive. Genetics direct these worker bees toward each task, but each bee also possesses extraordinary flexibility that allows her to change jobs according to the needs of the hive. For example, a bee may switch to food storage or foraging if conditions warrant, even if it means less chance of individual survival.

And the proverbial queen? Although she does have a specific and significant role—one that starts with a mating binge in the spring with as many male drones as she can find—her leadership role is somewhat overrated. After mating, she lays eggs non-stop all summer, receiving constant tending to by worker bees, since her reproductive success ensures the genetic survival of every member of the hive. She is not the central authority, however. Hives have no leader, no CEO. All decisions—including deciding when and where to collect nectar and pollen and when and where to move when the hive needs a new home—are decided by the worker bees.

Many beekeepers cite the altruistic and communal nature of the hive as a primary reason they are attracted to honeybees, but it also seems fair to argue that, at least among the keepers of Howard County, the altruism seems to rub off. It’s common to hear beekeepers gush about the kindness and selflessness of their peers.

“The beekeepers here are like family,” says Valerie Wampler, treasurer of HCBA, who is studying to become a master beekeeper. When her first package of bees was due to arrive, she had plans to be out of town, she says, and Dave Schultz, the vice president of the HCBA, stepped in and offered to help out.

Beekeepers are generous with their time, Walsh says, pitching in to help out a fellow beekeeper, volunteering to educate the public about honeybees, and sharing knowledge and equipment. Just like a colony of honeybees, the beekeepers of the HCBA seek to maintain a robust, healthy community.

The analogy falls a bit short when you consider that the HCBA has no queen. Rather, every beekeeper works to propagate the organization. Walsh waxes poetic about who is really in charge when it comes to honeybees. “You think you’re managing them, but they’re managing themselves,” she says. “We are just the stewards.”