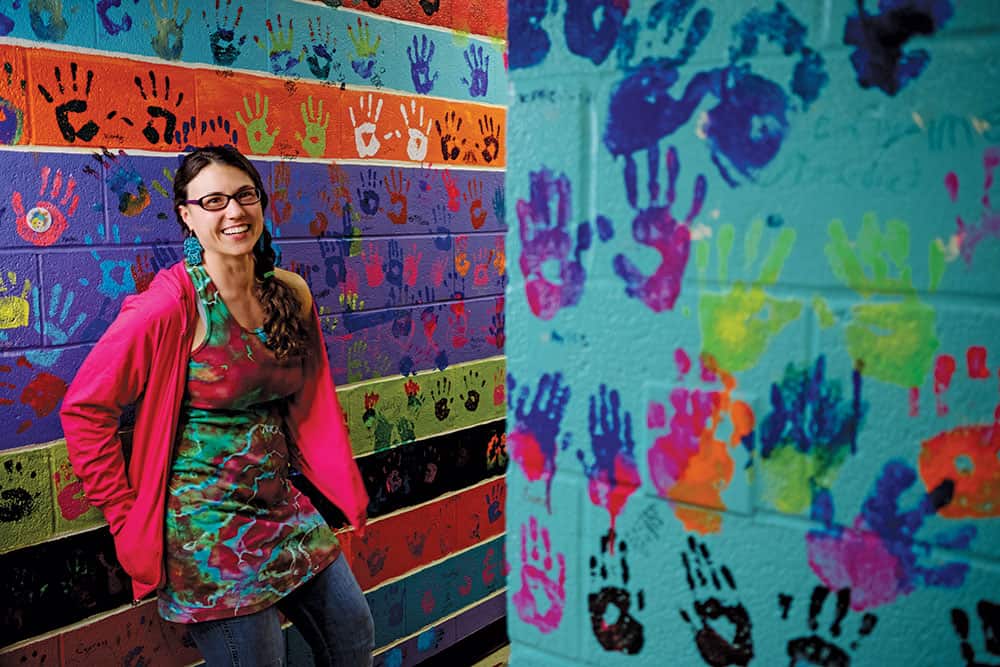 At Roll Up N Dye, staining clothes can be fun

Erin Cassell, tie-dye artist and owner of Columbia tie-dye studio Roll Up N Dye, is wearing a pink slouchy zip-up sweatshirt, tie-dyed yoga pants, and white athletic socks but no shoes. As she settles into a chair and tucks her feet under her, I get the sense that I’ve known her a lot longer than a few minutes.

Cassell, an Elkridge resident, grew up in Anne Arundel County. “My best memories from childhood involve going into the woods and wandering around and exploring, swamp tromping,” says the 39-year-old. “Most of the time by myself.”

Cassell who favors words like “groovy,” resembles a 1970s teen unconstrained by social conventions. She originally took on tie-dye as a means of self-expression but now uses the craft to help others—from the groups who come to her studio to tie-dye for a few hours for fun or for professional team-building, to marginalized members of her community. 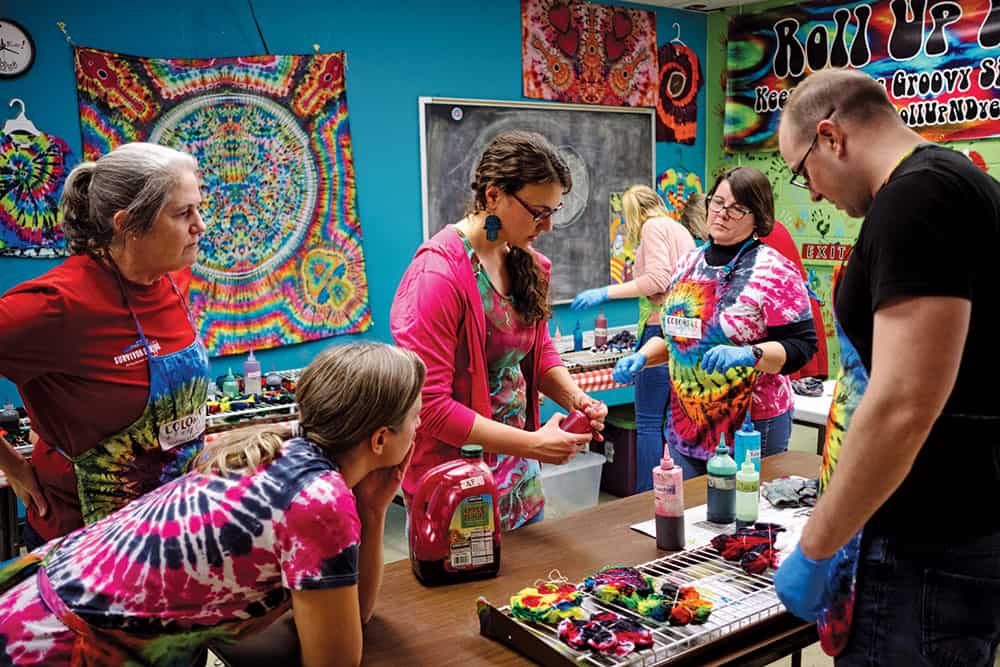 Cassell, who received a theater degree from then-Western Maryland College (now McDaniel), doesn’t hold strict definitions of what it means to be an artist. “Everyone’s an artist,” she says. “It’s not a matter of the product. It’s a matter of the experience.”

Her first foray into tie-dyeing was creating unique onesies for her infant daughter, who is now 10. When she was pregnant, Cassell bought professional-grade fiber reactive dyes that wouldn’t bleed onto her baby’s skin or fade in the wash. Then she invited some friends to tie-dye with her. And, as they say, the die was cast.

Initially, Cassell, an avid runner and cyclist, sold tie-dye products to friends to help raise entry fees for charity triathlons and cycling events. Encouraged by the positive response to her offerings, she soon opened an Etsy site, where she continues to maintain a robust online shop with tie-dye T-shirts, boxer briefs, trademark Heart Ass panties and made-to-order silk scarves.

As Cassell’s presence on Etsy began to expand, so too did her studio business. After a soft launch in 2011, she got serious about her studio tie-dyeing business in 2013, when she incorporated Roll Up N Dye and moved to her current Columbia studio on Red Branch Road.

Lately, she’s been re-evaluating the focus of her business. Initially, she says, “I was trying to figure out how everyone could be my customer,” she says.  However, she has started to see that being all things to all potential customers isn’t practical or possible.

Cassell’s favorite part of the business is teaching, she says, so lately she’s been spending more time hosting tie-dyeing workshops at her studio. These hands-on events are frequently more than just art classes; many become unique team building experiences for assemblages ranging from youth sports teams to employee groups.

Scott Habicht, director of support at SparkPost, an email infrastructure delivery provider, does his best to put together creative bonding sessions for the staff, some of whom hail from as far as China, Italy and England. Recently, he hosted about 40 employees of the Columbia-based firm at Cassell’s studio. The tie-dyeing outing, he says, has gotten better reviews than go-carting, video games and bowling.

“The overwhelming reception was fantastic,” he reports. “Everybody really loved doing it.” In addition to creating tie-dye shirts for themselves, employees also made bandanas and decorated cards with handwritten notes for pediatric patients at John Hopkins Children’s Center, where Cassell volunteers.

Cassell says she likes to infuse a little community service into her business, a habit that began when she was a child. In fact, it was working on a volunteer project in middle school that Cassell first encountered the pun that would eventually become her brand.

“We were driving through a town and I saw a hair salon called Curl Up and Dye,” she says. “It made me laugh so hard.” The name, if not the business idea, stuck.

Similarly, when Cassell observes injustice and hardship suffered by others, she can’t let go. Last year, she drove Howard County’s Route 1 on a daily basis and noticed the condition of public bus stops—many close to the road, most without shelter. She decided to do something about it.

She entered the Changemaker Challenge, a Horizon Foundation and United Way initiative that asks community members for ideas about how to improve life in Howard County. Cassell’s vision, called Safe and Beautiful Bus Stops, included installing benches made from recycled material, public art, tiny libraries and trash receptacles at bus stops. She received $10,000 in seed money from the challenge and is currently working with the county and others to implement her plan.

Cassell’s approach to the bus shelter issue resembles her overall business style: broad vision first followed by the details, which, incidentally, may change over time. Nonetheless, the core principles of her business model are fixed: “I think it’s important that people get out and experience art, whatever that form is,” she says.

Team building. The commonly heard buzzword refers to activities that experts say make sense—for both employee morale and a company’s bottom line. Spending time together in a fun, relaxed activity can draw employees out of their comfort zones and encourages collaboration and trust. Howard County and the surrounding area offer lots of opportunities for team-building opportunities.

For the Love of Food Cooking classes, some designed specifically as “culinary team building.” Pikesville, fortheloveoffood.com.

Watson Adventures Scavenger Hunt Scavenger hunts billed as “corporate team-building with a dash of culture” that take participants through museums and historic neighborhoods in Baltimore and Annapolis, watsonadventures.com.