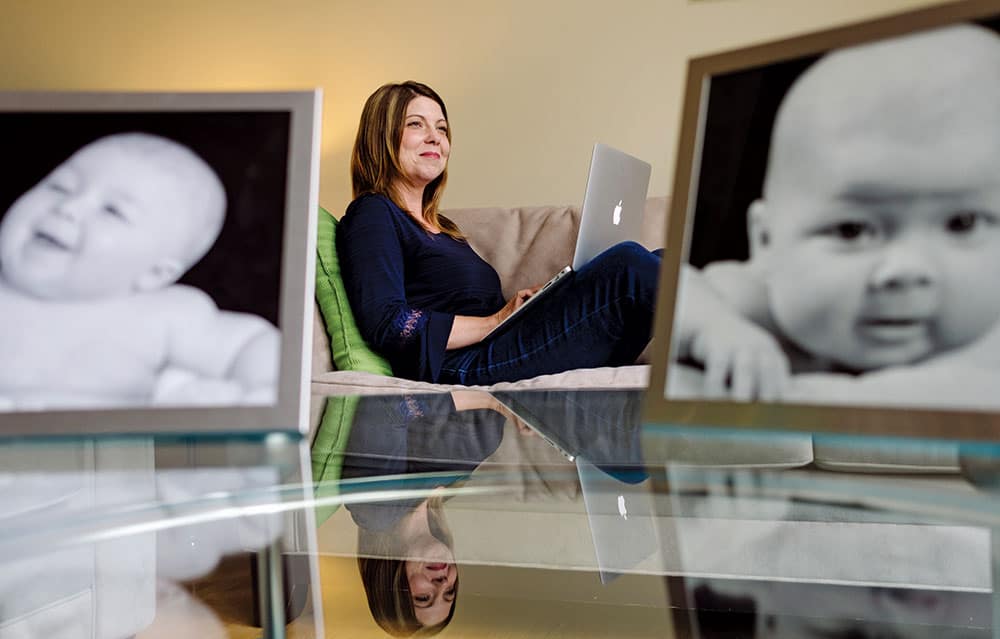 Keep ’Em Cookin’ is the brain child of Angela Davids, who created a community for women facing risky pregnancies.

A newly pregnant woman might daydream about decorating the nursery, shopping for just the right crib and changing table, getting in a few last outings with her girlfriends before the bundle of joy arrives to consume her every waking—and sleeping—hour. What she doesn’t envision is lying in bed for days, weeks or even months, unable to actively prepare for the baby’s arrival and worried sick that the birth will happen much earlier than expected. Angela Davids knows this less-than-joyful version of pregnancy all too well.

Not one but two harrowing pregnancies in which preterm birth seemed imminent—the second one threatening Davids’ life—ultimately resulted in her two healthy children, who were both born full-term. Even after she recovered her own health, Davids, who lives in Ellicott City, wasn’t ready to put her ordeal behind her entirely.

Instead, she decided to use it as a catalyst to support other women in similar situations. “I went through so much. I wanted to share with other women all I had learned,” Davids says. It wasn’t just accurate knowledge about the symptoms, risks and prevention of preterm delivery that she wanted to impart. “I wanted to create a place where women who were going through high-risk pregnancies could talk to other women.” Hence, one month after her son was born in 2008, she launched Keep ’Em Cookin’, an online educational organization with opportunities for site visitors to participate in live chats and forums. Davids describes it as her “passion project.”

A marketing writer by trade, Davids seeks out research-based information on topics such as preterm labor causes, symptoms, prevention and treatment that she then shares on her free website, keepemcookin.com. The information comes from medical literature and trusted organizations, including the American College of Obstetricians and Gynecologists, the Society for Maternal-Fetal Medicine and the March of Dimes. On the site, visitors also can learn about Davids’ own journey through pregnancies in which the threat of preterm birth loomed large.

Eight months pregnant, Davids experienced what she thought might be contractions. The next day, stepping off an elevator to meet a client, she suddenly felt like her baby might just “drop right out.” Admitted to the hospital with contractions just three to five minutes apart, Davids was administered magnesium sulfate intravenously for nearly 48 hours, making her hallucinate and feel as if her skin was on fire. Labor ceased, and she returned home on bed rest, delivering a healthy baby girl six weeks later, at 39 weeks. Preterm birth also threatened Davids’ second pregnancy, this time beginning at 24 weeks’ gestation. Three months of bed rest, five preterm labor episodes and several hospitalizations later, Davids delivered a baby boy at 39 weeks. While focused on avoiding keeping the baby from coming too soon, Davids also endured multiple issues, including gestational diabetes, severe preeclampsia and—post-delivery—life-threatening acute kidney failure.

“Somehow, I came out of all of this with a healthy baby,” Davids says, recalling her particularly challenging second pregnancy and its worrisome health scares—which escalated after delivery. Days after discharge, she was so weak she had to scoot down the steps to alert her husband to her symptoms—extreme weakness, swollen legs, chest pain and a terrible taste in her mouth. Her husband also noticed that her nose was bleeding. He immediately took her to the emergency room of a nearby hospital, where she remained for a week.

In the days after Davids returned home, she kept thinking about other women facing their own difficult pregnancies. “I wanted to find a way for them to connect with each other,” Davids says. “I also wanted them to have hope.” So she got out of  bed one night, went to her computer and registered the URL: www.KeepEmCookin.com. The name originated from when friends and family members who would ask Davids how she was doing while on bed rest and she’d respond, “Still cookin.” It was the first step in making the dynamic website a reality. 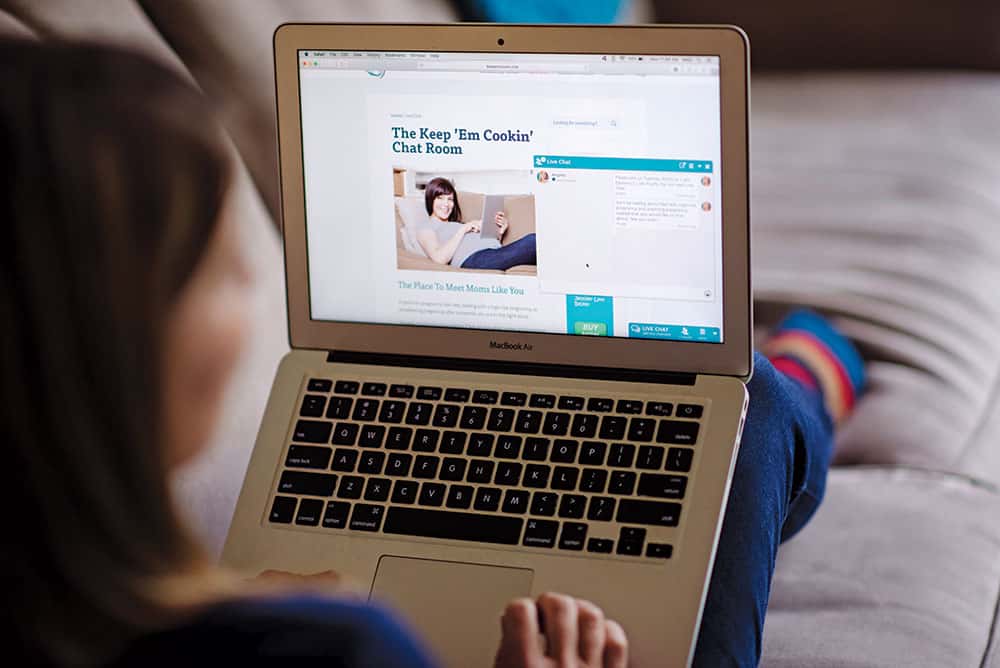 Without question, access to an online community of women during a time that could otherwise feel extremely isolating is a large part of the Keep ‘Em Cookin appeal. The live “chat room” that Davids moderates once a week, and an online forum where women can post and respond to messages at any time, offer a welcoming community to pregnant women at risk of preterm birth.

California resident Jennifer Chu says she was often too stressed or depressed to post to the forum during her second pregnancy, which included several weeks of modified bed rest and an eight-week hospital stay. But she “lurked” on the site, she says. “It helped to know that people had been in my position before.”

Eventually, Chu did weigh in on the forum, keeping the promise she made to herself that she would post on Keep ’Em Cookin’ after her son was born. In March of 2018, she wrote: “I made it to my 39-week scheduled C-section and got my rainbow baby. He was 8 lbs. 5 oz. and beautiful! He’s now a babbling three-month-old and is amazing. Hang in there for everyone who is going through this.”

Keepemcookin.com has scores of similar testimonials from women who have sought, and found, solace on Davids’ site—which gets an estimated 350,000 visitors annually. The popularity and reach of keepemcookin.com has even launched Davids into the national spotlight at times. In 2010, she was tapped as a featured speaker in support of a congressional briefing regarding the PREEMIE Reauthorization Act, legislation representing the federal government’s commitment to preventing premature birth and its consequences. Also, in her most recent edition of the world-famous book What to Expect When You’re Expecting, author Heidi Murkoff consulted Davids on a section about bed rest. Davids has even written a book for children, about what to do when your mom is on bed rest.

But Davids’ commitment to the site is not for fame and certainly not for fortune; seeking paying advertisers for the site is “not her thing,” Davids acknowledges. Supporting women at risk for preterm births is.

“Getting to know these women who have been told they are at a high risk of delivering a baby who may not live, or who may have a lifetime of physical and developmental issues, and to see them make it to 36, 38, or even 39 weeks—it’s just so exciting,” Davids says. 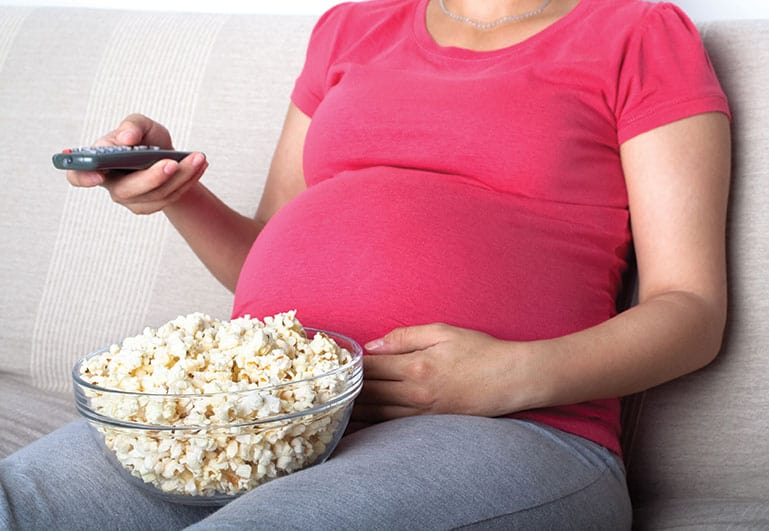 Stuck on Bed Rest? Try These Tips to Maintain Your Sanity

Delegate Many women don’t like to delegate, or don’t know how. But if you’ve been told to restrict your activity, you have no choice but to ask for help. Don’t feel guilty about it; at some point, a friend or sister may ask you to pitch in for her. Plus, it’s great practice for parenthood, when you will no doubt need to accept help from others.

Stay distracted Juicy novels, challenging crossword puzzles, personal finance spreadsheets—whatever you fancy, keep your mind on them and off of your worries.

Invite friends over You may be confined to your house, but that’s no reason to be alone. Socializing with close friends, even if you’re just sitting around your bedroom, can cheer you up and keep you from feeling lonely.

Binge watch a TV series This is something you definitely won’t be able to do when the baby arrives, so take advantage.

Get a beauty treatment If you have a good relationship with your hair stylist or esthetician, see if they might make a house call.

Tackle a new skill. Ever want to learn how to knit? Listen to language tapes? Master beautiful calligraphy? This could be the perfect opportunity.