WHEN THE DOCTOR PRESCRIBES VEGETABLES, FAMILY MEMBERS FALL INTO STEP

As a longtime food writer and recreational home cook, I received the mandate from my husband’s cardiologist that he start eating vegetarian like a punch in the stomach with an oversized zucchini. For me, creating meals has always 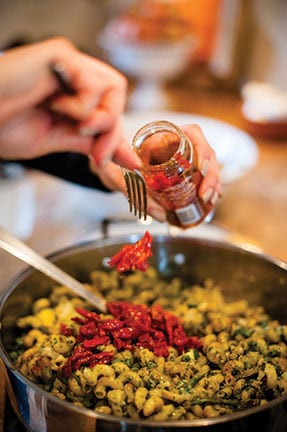 been a kind of therapy – a creative exercise that was liberating and fun. But I love my husband, so really had no choice but to jump on board the healthy-diet train along with him – in fact, I realized the only way the plan would work is if I took the controls. As the family cook, it would be unkind, if not downright cruel, to fry bacon or grill steak within sniffing distance of the poor man.

The rewards, of course, were beautiful plates with rainbows of vegetables, salads dictated by the seasons and a newfound love affair with hummus. When the doctor gave us permission to eat wild-caught salmon twice a week, we were downright gleeful. But the greatest reward came with the increased energy, lower cholesterol counts and the noticeable reduction in my husband’s girth. Since the diet overhaul 18 months ago, combined with regular exercise at home and (for the past five months) vigorous workouts at the local Y, he’s dropped 30 pounds.

Being the food police was not a job I enjoy. I had to learn to lighten up – not just on the calories but also in my attitude – encouraging my husband as he struggled with the idea of life without prime rib or burgers. As for me, I ate meat whenever the opportunity presented itself – mostly, at lunch with girlfriends. And because George’s diet has me down to 110 from 119, I am grateful for the experience and the opportunity to expand my vegetarian cooking skills.

Experts agree that family support is essential when it comes to changing one’s eating habits. Courtney Carpenter, a certified nutrition specialist who has counseled many folks during her 20 years at David’s Natural Market in Columbia, has some wise words on the subject. “Make it a family affair,” she advises. “Take your kids to the grocery 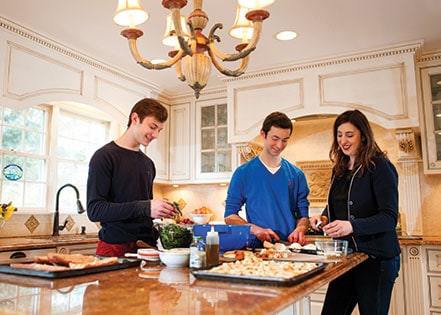 store and let them pick out healthy foods for themselves. Then cook together, set the table together and make it fun.” She practices what she preaches during weekends when she and her husband, Shirley Callas, plan food-centered events that include his teenage daughters and other family members.

Carpenter is a strong proponent of natural foods, recommending organic choices in everything from beef to beans, as well as milk and dairy. She has helped many families adopt better choices when they shop. “Some of them call me ‘the Sugar Sheriff’ because I recommend avoiding sodas and sweets,” she says.

Lisa Regnante is one of Carpenter’s converts. She could be called a food activist as a result of her campaign several years ago to bring healthy food choices to the menu at her sons’ elementary school. She was raised in an Italian family for whom communal meals were important – and still are. “We’re the type of family who talks about what to have for dinner while we’re eating breakfast,” she says. 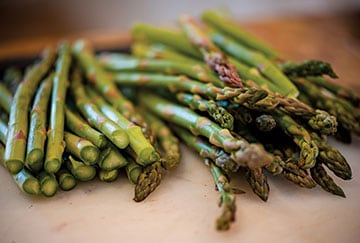 For Regnante, family meals began to be a challenge when her younger son, Thomas, was diagnosed with dairy and soy sensitivities at the age of three. Almost all packaged foods contain those ingredients, she found, so she ended up tweaking her own favorite recipes to include substitutes. She switched from cows’ milk to a nondairy substitute, used vegan cheeses in her Italian recipes, substituted vegetables for meats in stuffed ravioli, switched from mayonnaise to hummus, and instead of meatballs used a variety of vegetables for pasta toppings.

The family adapted easily to the changes, and Thomas eventually outgrew his food allergies. But Lisa continues to maintain the healthy lifestyle. The boys, now 15 and 17, have grown up appreciating the link between health and the food they eat. Regnante cultivated their interest in food with trips to farmers’ markets for fresh products, dining in ethnic restaurants and food-centric trips to Italy and Istanbul. The family planted an herb and vegetable garden at their home in Ellicott City.

Four years ago, Thomas and Charles started a food blog after discovering their flair for communicating about food during a summer writing class. The blog, “2 Dudes Who 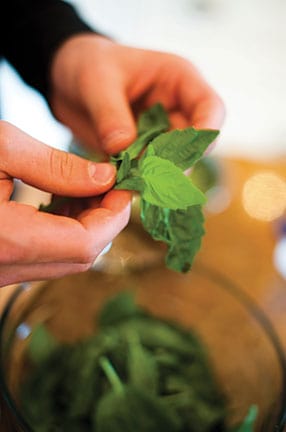 Love Food,” was chosen as the area’s Best Food Blog of 2014 by “Baltimore Magazine.” Last year, their culinary chat base (which includes tips on healthy eating as well as restaurant reviews and recipes) garnered more than 100,000 views, with 649 Twitter and 322 Facebook fans.
Howard County residents Kalyna and Brian Nedilsky met Courtney Carpenter through Courtney’s husband, who was Kaylna’s personal trainer. They had recently adopted their son, Jai, from Korea. The chubby 1-year-old had been in the habit of steady snacking on high-carb foods and was unhappy when his new parents withdrew the treats from his diet.

Kalyna said he went through a “period of mourning” when deprived of his favorite snacks, but soon adjusted to his new life in a new country. His parents eliminated all soda and juice while building meals around healthy grains and organic foods. Kalyna (whose parents came to the U.S. from the Ukraine) learned to make Korean dishes and says that these days, her son’s go-to foods are fresh vegetables and eggs as well as sashimi and sushi. “His favorite snacks are strawberries and seaweed,” says Kalyna. Jai recently praised his mother for the kale salad at dinner one evening. “This is a very good combination,” complimented the precocious 6-year-old, who is being raised in a multilingual (English, Korean, Spanish and Ukrainian) Howard County household.

Along with a healthy diet, the Carpenter, Regnante and Nedilsky families share another habit: They make time to eat together as frequently as possible. The benefits, they say, are enormous.

As for my husband, George – he has done a good job transitioning from carnivore to a vegetarian, though not without a few stumbles. We were recently at our favorite restaurant, and he couldn’t resist the osso bucco – a bone-in veal shank usually in portions worthy of a Neanderthal – and he loves food shows and culinary magazines. The first three days were the hardest, he says. When he’s tempted to backslide, he takes a philosophical view, he says, considering every bite “a way of helping my heart.” * 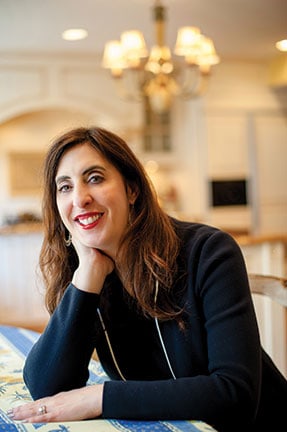 When Ernest Hemingway was asked to describe his writing schedule, his reply was typically terse. “First, I clean the refrigerator.” That’s good advice for anyone embarking on a healthy diet. Include your pantry. Get rid of any foods with fat, sugar, sodium or chemical ingredients. Next, stock up on low-sodium canned beans or beans bought in bulk (available at David’s Natural Market or Whole Foods). Add tins of low-sodium diced tomatoes and boxes of brown rice and other healthy grains. Read labels carefully, paying attention to sodium and fat levels. In addition to “Forks Over Knives,” add “Washington Post” food writer Joe Yonan’s “Eat Your Vegetables: Bold Recipes for the Single Cook” and/or Mark Bittman’s “VB6 Eat Vegan Before 6:00 to Lose Weight and Restore Your Health for Good” to your kitchen bookshelf.
– Mary Lou Baker 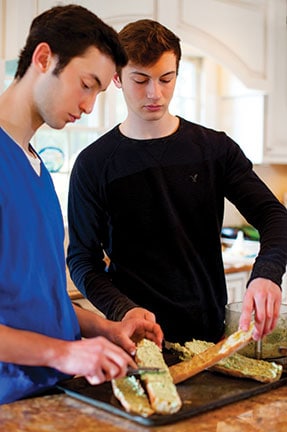 ❒ juice and zest of one lemon

Lightly toss all ingredients and add dressing to moisten.