The sisters of Alpha Kappa Alpha are friends for life

At 82, Ethel Hill is energetic and chic, her lively face framed by a stylish gray bob and silver earrings. In the sunken living room of the Running Brook home where she has lived since 1969, Hill perches on a plush sofa, leafing through stacks of photographs, newspaper articles and other memorabilia tracing her long history with Alpha Kappa Alpha (AKA), the black sorority founded at Howard University in 1908. 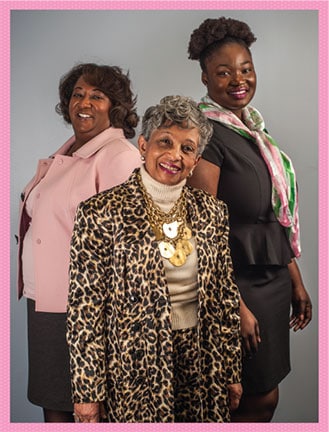 At one point, she walks to the bookshelves on the other side of the room and picks up a small statue of a Nittany lion, the Penn State mascot, with her name and the year she graduated from the university – 1954 – inscribed at the base. The statues were given to all five founding members of Penn’s Alpha Kappa Alpha sorority chapter in 2003, when the chapter turned 50.

One photograph shows Hill and 22 other beaming women in elegant dresses. These women are the charter members of Iota Lambda Omega, the Columbia-based chapter of AKA, which came into being October 7, 1972. Hill also lingers on photographs of her daughters, both members of Iota Lambda Omega: Donna Hill Staton, who in 1995 became the first black circuit court judge in Howard County, and Dr. Terri Hill, a Howard County plastic surgeon and state lawmaker.

Ethel Hill, a longtime lawyer for the Social Security Administration and two-time cancer survivor, is now retired, but she remains active with AKA Iota Lambda Omega, attending once-a-month meetings and participating in such events as the chapter’s annual fashion show, which raises money for scholarships.

“You establish some wonderful lifelong relationships,” she says of her decades-long experience with the sorority.
Hill, who grew up in Chester, Pa., knew from an early age she wanted to attend an integrated college, a decision supported by her parents, her minister and none other than Martin Luther King, Jr., a member of her church while he attended nearby Crozer Theological Seminary.

“Our schools were segregated until I got to high school,” Hill recalls. “When the school district bought books, the white school got the new books and we got the old books, with pages missing.”

At Penn State, she was one of just eight African- American students in her freshman class. Since white sororities on the campus were not integrated, Hill decided to help create the school’s first black sorority, a chapter of the fabled Alpha Kappa Alpha sorority. It opened in 1953, and became a focal point for her social and charitable activities. 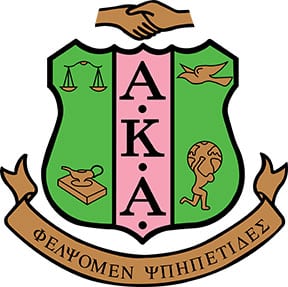 Alpha Kappa Alpha, headquartered in Chicago, is the nation’s oldest Greek-letter sorority for African-American women, started by nine students at historically black Howard University in Washington, D.C. AKA now has 265,000 members in 986 undergraduate and graduate chapters in 42 states, plus the District of Columbia, the U.S. Virgin Islands, the Bahamas, Germany, Africa, South Korea, Japan and Canada.

After earning a social work degree at Bryn Mawr College in Pennsylvania, Hill settled in Columbia with her late husband, Donald, who worked at the Social Security Administration, and their daughters. Her work as a founder and leader of AKA Iota Lambda Omega provided a social network and support system in her new community, and she served as the chapter’s president in 1973 and 1974.

As a graduate chapter of AKA, Iota Lambda Omega is open to women who were members of AKA sororities, as well as women who are invited to join, as long as they aren’t affiliated with another sorority. (That’s especially true if the sorority is Delta Sigma Theta, founded at Howard in 1913, a friendly rival to AKA.) The Columbia chapter has grown from those original 23 members to 220 accomplished, dynamic women, who socialize, support each other and devote themselves to helping others.

“I feel like this is what I’m expected to do,” says Tracey L. Williams, 49, who is halfway through a two-year term as president of the Columbia chapter. “To be able to meet the needs of the community while working with wonderful women, it makes the work easy,” she says. “And it’s so much more fun.”
AKA celebrates education and community service, working to improve the social stature of girls and women while being of “service to all mankind,” in the words of its mission statement. There is little tolerance for the hazing rituals and wild partying of some fraternities or sororities. All undergraduate chapters are sponsored by graduate chapters, who chaperone college sorority events.

Since 1978, the AKA Iota Lambda Omega chapter has sponsored Lambda Phi, the AKA chapter at the University of Maryland, Baltimore County. The women in the Columbia chapter “are our mentors,” says Gabriella Kuffour, 21, a UMBC junior. “They show us how to go about things. Everything we do, there are at least one or two members from the Columbia chapter there.”

Kuffour was born in the United States and grew up in Ghana. She has been in Maryland since 2011 and is majoring in biology with plans to attend medical school to become a neonatologist. She joined the eight-member AKA chapter in 2013, in the spring of her freshman year.
“It’s all about sisterhood, scholarship and service, and those are all things I am passionate about,” she says.
Kuffour says she chose a black sorority because it addresses “issues I see as a black woman,” through events such as a backpack drive to collect items for an all-girl school in Ghana. It’s important to her that AKA members are “leaders in their community, leaders in their family, and they are also successful in their careers. We empower each other to be successful.”

In 1998, AKA Iota Lambda Omega created The Pearl Foundation, Inc., a nonprofit charity that raises funds for scholarships and other programs. More than $350,000 has been given away in scholarship money to high school seniors. Another $15,000 has been donated to the Silas Craft Collegians Program, which provides Howard Community College scholarships, with a special emphasis on helping African-American male students.
“I’ve been very proud of the fact that, from the beginning, we give out scholarships, not just to females but to males as well,” says Hill.
Williams, president of the Columbia chapter, joined AKA when she was an undergraduate at Old Dominion University in Norfolk, Va. “We strongly believe education is the way to ensure a successful life,” says the Ellicott City resident, a pupil personnel worker for Howard County Public Schools. “Education is very important to us.”

In 1999, Williams and her husband, Trent, moved to Maryland when he took a job with Bank of America. Williams transferred her AKA membership to the Iota Lambda Omega Chapter, a move that helped her meet people and find an outlet for her community work. She’s been president of the Columbia chapter since January 2014. Her daughters, both graduates of Mt. Hebron High School, are following in her footsteps.

Tiara Williams, 24, who lives in Ellicott City and works at PNC Bank, was president of her AKA chapter at Hampton University in Hampton, Va. Tatiana Williams, 21, is currently a senior at Old Dominion and president of the AKA chapter that was so meaningful to her mother.

Williams enthusiastically describes a few of the many charitable programs organized by the Columbia chapter. A launch party for 21-year-olds aging out of foster care, who are given cookbooks with easy meal and snack ideas. Food pantries. Clothing drives. Awareness campaigns for Alzheimer’s disease, stroke and mental illness.

“I feel a major sense of responsibility for my community,” she says. “Together, we can do so much.” *