When the Chesapeake Shakespeare Company (CSC) put down roots in downtown Baltimore, it kept its summer home in Ellicott City. The company moved into the 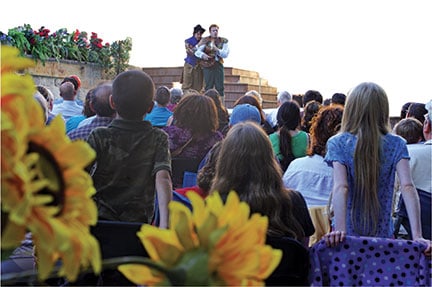 former Mercantile Bank at the corner of Redwood and Calvert streets last fall, realizing a dream that had been in the works for some time – to find a winter home for its productions.

They’d looked at places in Howard County, including old estates and even a car dealership, says Lesley Malin, CSC artistic director. But the bank building, with its ornate plaster work and soaring atrium, inspired both Malin and Ian Gallanar, the company’s artistic director. The shape of the space reminded them both of the Globe, where Shakespeare’s works were born. “We knew this was it,” Malin recalls.

The beloved summer productions – and even the occasional “roaming” shows on the grounds of the Patapsco Female Institute – will remain. This summer, the company will stage “Comedy of Errors” at the outdoor venue. One of the bard’s earliest works, the comedy’s two pairs of identical twins, separated at birth, are set loose for slapstick encounters and mistaken identities.

Planning each season, she says, “We look for a balance between brave, artistic work and works audiences will love.” chesapeakeshakespeare.com.