Treating Women “Down There”

The greatest barrier to women’s health may be silence

After being widowed suddenly at the age of 35, Ellicott City resident Janet Weise approached each day in survival mode. Balancing the equally demanding jobs of a single mother to her son with her career as a college administrator, the former Division 1 college athlete admits that her personal health needs came last. “You can say I was a hot mess,” jokes Weise, who over the years had become inactive and, by her own admission, “pretty severely obese.” Then came the wakeup call. 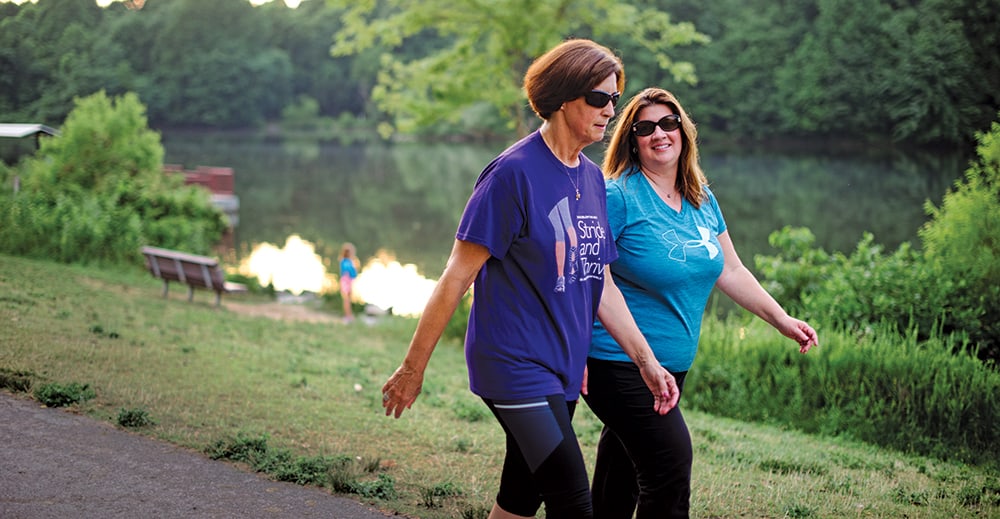 At the time they met, Janet Weise, left, promised Dr. Amanda Fader, right, that she would lose 90 pounds. The two have since become friends and walking partners. Weise has 5 pounds to go.

Two years ago, at the age of 53 and post-menopause, Weise noticed bleeding. She mentioned it to her gynecologist who performed an internal ultrasound as well as an endometrial biopsy, by removing a piece of tissue from her uterus. Weise was diagnosed with complex atypical endometrial hyperplasia, a condition involving an overgrowth of the uterine lining that can lead to endometrial cancer. 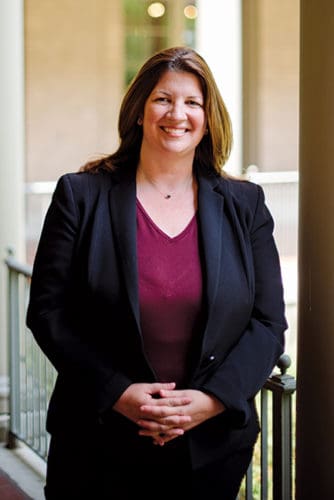 Dr. Amanda Fader, director of the Kelly Gynecologic Oncology Service at Johns Hopkins believes women should be open about their health concerns.

Weise was referred to Amanda Nickles Fader, M.D., director of the Kelly Gynecologic Oncology Service, who performed a total hysterectomy and removed Weise’s fallopian tubes and ovaries. Fader, says Weise, eventually became her trusted friend as well physician. “I had read some of her [Fader’s] published work about obesity and cancer and watched a couple of her webinars, and we talked about it in an appointment,” Weise says. “I promised her I’d lose 90 pounds. I have five more to go.” The two women, both Howard County residents, now occasionally walk and run together in Centennial Park.

During her health crisis, Weise made a couple of decisions that, in retrospect, may have saved her life. But they were decisions that too few women come to. First, she paid attention to a painless but unusual symptom (irregular bleeding) and brought it up with her doctor in a timely manner. Next, she raised the sensitive but important subject of weight loss with yet another doctor. Despite our culture’s near-obsessive interest in explicit sex—40 million Americans regularly visit porn sites, according to cybersecurity company Webroot—adults tend to shy away from open and honest conversations about sexual health, whether to educate their own children or to keep their sexual partners informed.

Anecdotal and statistical evidence shows that physicians are equally guilty of avoiding these difficult topics. So it should come as no surprise that too few patients and physicians readily converse about sensitive subjects, particularly those involving anything “below the belt.”

In a recent study that surveyed more than 1,000 OB/GYNs, only 40 percent reported routinely asking patients about sexual problems or dysfunction, even though both can be a sign of serious health issues like endometriosis and infections. As for conversations with patients about weight loss, physicians tend to steer clear of these as well, citing a variety of reasons—from too little time in the office visit to lack of training on how to counsel patients on the matter.

While it’s impossible to calculate the cumulative and preventable damage to women’s health caused by poor communication between patients and physicians, there’s cause for optimism.

Increasingly, health care organizations have started to capture essential information about patients’ health, however sensitive it may be. In-office surveys are increasingly used to gather patient information, allowing patients to respond to awkward questions more honestly in private. For instance, someone is more likely to reveal the number of intimate partners she has had over the past year to a piece of paper than directly with a health professional. Johns Hopkins Medicine, says Fader, values comprehensive screening, so she and her colleagues are able to collect patient information on important questions. “We screen women on everything from domestic violence and sexual abuse to poverty and related socio-economic concerns,” she says.

Fader and her colleagues also support public events that raise awareness of gynecological cancers. These events may, in turn, get patients thinking—and inquiring—about related medical concerns. Just last May, Johns Hopkins hosted its third Below the Belt Stride 5K Race, raising more than $100,000 to support gynecologic cancer trials and immune therapies, along with related support services. Front and center in the event’s publicity materials was this message, “Every 5 minutes, a woman in the U.S. is diagnosed with a ‘below the belt’ gynecologic cancer. These cancers affect more than 100,000 women and cause more than 30,000 deaths each year.”

While getting such information out to the public is a start to improving awareness, Fader says there’s no substitute for direct communication between patient and provider. Over the last decade, she has observed that women are more willing to bring up sensitive matters. “There’s been an empowerment in speaking up about things that concern them,” she says.

Weise serves as a prime example. Having been in “survival mode” for so many years, she only recently began openly discussing her own health issues with those around her. “I talk about this to my friends, at meetings, at work,” Weise says, referring to her diagnosis of endometrial hyperplasia and her quest to live more healthfully as a result of it. “The more you share, the more support you get,” she adds.

The feeling that sharing information will yield support is essential to a sound patient-physician relationship, Fader believes. Even so, she acknowledges that not all patients feel their physicians are really paying attention. In the worst-case scenarios, Fader explains, patients are often made to feel ashamed—particularly about being overweight.

“There’s a lot of literature regarding disparities of care based on size,” says Fader, who points to factors from a lack of gowns sized for larger patients to physicians’ suggestions—whether subtle or overt—that a patient is to blame for her health problems.

As a physician who treats reproductive cancers, some a direct consequence of excess weight, Fader believes firmly in the power of a positive and open patient-physician relationship as key to improving health outcomes.

“Women should not settle. If they don’t feel like their provider listens to them, it’s okay to seek out someone else,” Fader says.

Body parts may sag, response time may slow, but that’s not to say there’s no sex in old age. On the contrary, with adults living longer, healthier and more active lives, the opportunity for continued or new sexual relationships into old age is real. Therefore, conversations about sex and seniors—especially between older adults and their physicians are essential.

Until recently, there had been far more speculation than actual information on the subject of sex and seniors. But a broad-based 2007 study of 3,005 U.S. adults (1550 women and 1455 men) between the ages of 57 and 85, published in the New England Journal of Medicine, shed light on the topic.

Some of the findings may come as a surprise; others, less so. The study reported that frequency of sexual activity didn’t begin to decrease substantially until after 74 years of age—despite more than half of all respondents reporting sexual problems. Problems were chiefly low desire and difficulty with vaginal dryness for women and erectile trouble among men. Even among the oldest age group surveyed (75 to 85), a significant percentage reported having a spousal or other intimate relationship; 78 percent of men and 40 percent of women, respectively. The gender disparity may be a result of men being typically older than their female partners and dying earlier than women. The study concluded, however, that regardless of respondents’ age, women were far less likely than men to report interest or engagement in sexual activity. Also, among both genders, self-reports of being “healthy” were positively associated with sexual activity.

Aside from figures relating to desire and frequency of sex in older age, perhaps the study’s most important finding was that these issues are rarely discussed with physicians.

Margot Watson, M.D., believes gynecologists should routinely initiate conversations with older patients about their sexual heath. “At each well woman visit, a standard question we ask every patient—regardless of age—is whether they are sexually active, what their sexual orientation is, and whether or not they want to be tested for STIs [sexually transmitted infections],” says Watson, vice-chair of Howard County General Hospital’s Department of Obstetrics and Gynecology.

But she acknowledges that, with all the things doctors need to review in a relatively short annual patient visit, particularly with older adults, sexual health might not always make the list. In that case, she admonishes patients to bring issues up with their medical providers.

Watson suggests that patients with questions about their sexual health consider scheduling a separate visit to ensure their doctor can devote proper time and attention to the issue. “Patients don’t have to tell the front desk what it’s about,” she explains. “They can just say they need to come in for a problem visit.”

Watson’s suggestion indicates one of the barriers to discussions about sexual health in the office visit: sheer discomfort broaching the topic. “Please just come out and say it,” she says. “Remember, I have heard it all and I want to help.”

If you experience any of the following “below the belt” symptoms, alert your doctor immediately. These symptoms may indicate a gynecologic cancer or other serious medical concern.