A SISTER’S PLACE IS IN THE KITCHEN

THE KAUR SISTERS LEARNED TO COOK AT THEIR FARM IN PUNJAB.

Growing up together on a farm in the Punjab province of northern India, sisters Kinday and Boli Kaur spent countless hours in the kitchen with their mother and maternal grandmother helping to make meals using traditional cooking techniques and ingredients the family raised on their land.

“It’s hard to remember when we didn’t enjoy cooking together,” smiles Kinday. She recalls making bread with her sister as young girls. Called “roti” in 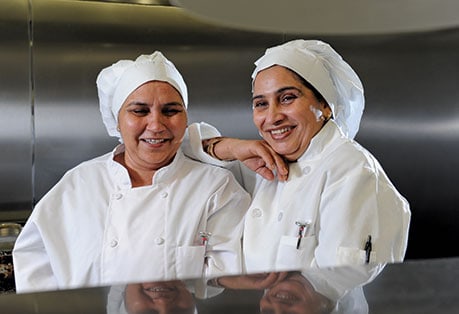 their native language of Punjabi, bread is the foundation of northern Indian meals.

Bread is served at every meal in India, adds their brother Keir Singh. “It is always, always made at home, three times a day.”
The sisters have fond memories of baking roti at home, and occasionally at their local temple for community members – often numbering in the hundreds. In India, explains brother Binda Singh, Sikh temples provide food 24 hours a day. “If you walk in hungry at two in the morning, someone will get up and feed you,” he says. The tradition is called langar, or community eating. “Boli was recently in India,” he adds, where she spent 10 days making bread for the community.

The two sisters, now in their 50s, animatedly tell of baking bread on the temple floor – first heated to a searing temperature by hot coals, then cooled for ideal baking. The soft dough was rolled, then divided into small pieces and patted thin. The loaves were then set on the heated floor to bake for several hours. Surrounded by the heated coals, the bread would develop a crispy crust.

Bread is the foundation of North Indian family meals and the centerpiece of the sisters’ culinary education at home. They are also skilled in traditional Punjab cuisine – with its influences that reach west to Iran and east to the Himalayas. Their know-how shows up in dishes Kinday and Boli create in the kitchens of two of the Baltimore region’s most popular Indian restaurants: the venerated Ambassador Dining Room in Baltimore City and the new Ananda in Howard County’s Maple Lawn community.

Both restaurants are committed to authentic Indian cuisine made with local ingredients. Younger sister Kinday heads Ananda’s kitchen while Boli is chef at the Ambassador. 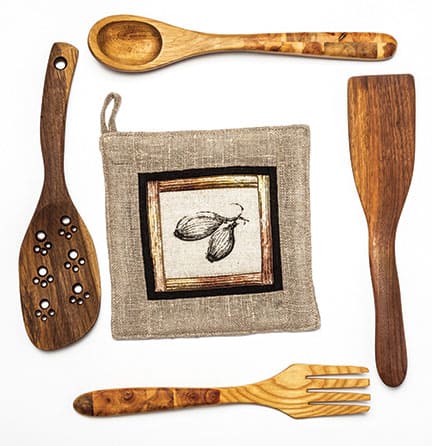 We met at Ananda, which means “bliss” in Sanskrit, in the sedate townhouse community of Maple Lawn. A solid structure with castle-like turrets, expansive windows and muted grey tones on the outside, the restaurant stands alone, with no exterior signs. Like the Ambassador, tucked discreetly into an apartment building in a residential neighborhood in north Baltimore, Ananda seems to quietly assume that you will find her.

Inside, soft shades of red, beige and gold, and sumptuous fabrics and pillows embellished with embroidery, complement the brown leather upholstery and dark wood floors and paneling to create an inviting and elegant space.

We sat in the dining room, flanked by fireplaces, with a view on one side of the contoured open space of Maple Lawn, on the other of the brightly lit cocktail lounge. It was a chilly day and all eight of the restaurant’s fireplaces were lit, creating a warm and, well, blissful, environment.

The restaurants are owned by Kinday and Boli’s brothers, Keir and Bindha Singh. The male and female siblings have different surnames, Binda explains, following the Sikh – or warrior – tradition of all females carrying the name Kaur, while males are Singh. The sisters haven’t been in the U.S. for long – Boli came here five years ago, and Kinday followed a year and a half later. During our interview, Binda and Keir were on hand to translate as the sisters, dressed in crisp chef’s whites, spoke in their native language of Punjabi about some of their experiences in the kitchens of India and the U.S.
The two came to Maryland with culinary techniques they’d learned primarily in the family kitchen. They use ingredients like meat, lentils, mild cheese and seasonal vegetables, herbs and spices. Dal makhani, for example, is a traditional Punjabi lentil dish with gentle seasonings like turmeric, ginger and garlic, served with many meals. “Cooking with seasonal foods is a passion,” Kinday says, and Boli nods in agreement.

The family’s childhood home was adjacent to India’s Kent Air Force base in Adampur, so in addition to the recipes they learned from their mother, the young girls were exposed to cuisine from other regions of India. The two expanded their repertoire to South Indian styles – where rice is more prevalent than bread, and sauces get their creaminess from coconut milk instead of dairy. In South India, green chilies and kaffir limes are used, and fish is used more than the meats found in North India. Proximity to the base, says Keir, “gave Kinday and Boli a unique insight into what other styles of home cooked Indian food should taste like.”

The kitchen at Ananda caters to American palates with such hybrid dishes as the corn and avocado salad, brightened with crisp red peppers with a white balsamic vinaigrette. The crab Malabar is Maryland’s favorite shellfish prepared in South Indian style, with coconut curry.
Traditional stuffed pastry samosas and fritter-like pakoras are fried lightly, so the flavors of cauliflower, potato, peas and minced lamb within aren’t overpowered.

Palak paneer is a creamy spinach dish with chunks of mild, unripened cheese. Delicately spiced, it aligns with the family’s philosophy of serving authentic dishes that aren’t too spicy for American palates.

In India, the sisters learned to cook according to the seasons. In the United States, they are astonished by the availability of nearly all of the vegetables, herbs and other ingredients they need throughout the year. Boli laughs as she points out another American abundance: “Water,” she smiles. “You can just run hot water here. You never run out of hot water!”

The family home, Kier explains, was a large farm with animals and vegetable gardens, and the water came from a well. Oxen were used to pull up the water, which was kept cool in a clay cistern in the kitchen. If warm water was needed, it was heated on the wood-fueled stove. The house had no electricity. “It was a bit like camping, really,” Keir says.

“We were rich in many ways,” Binda adds. “Our family was tight, we ate all three meals together.” While his parents’ philosophy, he says, was to “play the cards you are dealt,” the highest priority in the family was education. “In India education comes first in many families,” he says. “Even before meals. Parents want their children to be educated because that is the only way out of poverty.

Now the entire family (with the exception of a brother in Toronto) lives in the U.S. for most of the year. Their parents go back to their farm during the winter, Binda says, but in the warm months, they grow herbs for the restaurants at their nearby residence. The sisters also travel to India once a year – on separate trips so one is always on hand to oversee the restaurants Boli and Kinday live close to their respective restaurants so they can walk to work each day. They visit each other at least once a week and laughingly admit that their favorite hobby is spending time on the phone.

The family maintains its traditional roots. The sisters are both married to men that their parents chose for them. “And they are wildly happy,” Bindha reports, wondering if, at 38, he should try an arranged marriage. “They work out 99 percent of the time.”

While working outside of the home, “is not traditional” for Indian wives, says Keir, the arrangement makes sense. When the brothers opened the Ambassador, he says, his sisters “were helping us over the phone” from the farm in Punjab.

“Our parents were educating our sisters when families around them were saying girls don’t need an education,” Binda says. Now, their parents like the idea of the sisters working together, he adds. Boli and Kinday each have two children, who range in ages from 19 to 25.

Sitting with this family in the lovely Ananda dining room, warm aromas of simmering sauces wafting from the kitchen, I’m struck with the sense that this sisterhood is magical. Language doesn’t prevent me from observing the love between these two, who finish each other’s sentences, laugh and exchange glances that only sisters can share. The two weave together memories of their childhood and describe their love for cooking, the challenges they faced in moving to a new land, and their commitment to family and community. I’m struck with a sense of bliss. *