Someone to look up to

SOMEONE TO LOOK UP TO

When St. John Baptist Church started its mentoring program in 1992, no similar programs existed in Howard County. At least, that’s the way Carolyn Gayle, of St. John’s program, remembers it.

“We were the first,” says Gayle, who has been with the program almost from inception.  Now, Howard County has an abundance of mentoring programs, staffed by volunteers and geared to different audiences. Some emphasize academic achievement; others, positive role models. Some interact with the children’s parents; others do not. 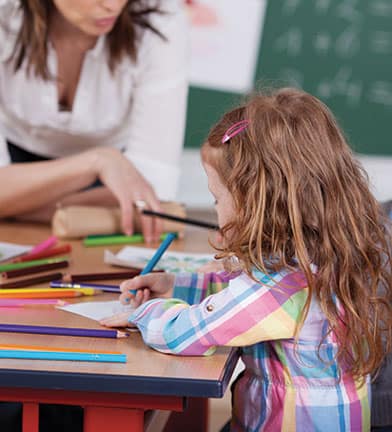 Big Brothers Big Sisters of the Greater Chesapeake has been active in Howard County for more than 60 years. It currently has 41 youth in the county matched with mentors through its community- and school-based programs.

The brand-new undertaking resembles existing programs in Baltimore City and in Baltimore County, according to Tosha Russock, director of programs for Big Brothers Big Sisters. “We were looking for a company to partner with Howard County,” she says.

That company turned out to be COPT, Corporate Office Properties Trust, in Columbia, whose employees volunteer to mentor 17 third-grade students from Bryant Woods Elementary School. Twice a month, the students travel during the school day to the COPT office for a lunch-and-learn. The goal is for employees to stay with the students until they enter middle school.

Along with learning about business and careers in a curriculum developed by Junior Achievement, says Russock, the students and their mentors “spend time in conversation and relationship-building.” The organization is hoping to expand the program to other Howard County companies, she adds.

Likewise, the Howard County Police Department is looking to expand the mentoring program it currently operates in six middle schools to help children transition from elementary school. Sergeant Amy Meek, supervisor of the youth services section, hopes to get funding that will enable students already in the program to stay after school one day per week.

“They can get help with homework and talk privately to their mentors,” says Meek. The funding would also reward students who meet program goals with activities and field trips.

Participants are recommended by school guidance counselors, based on who they believe would benefit from interaction with positive role models. The children come from a variety of household situations, with a common thread that “the child is not attaching to school socially,” says Meek. “Academics play into it too. We help them adjust.” 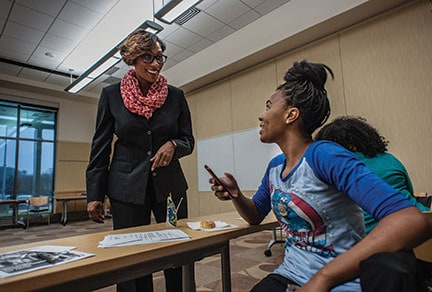 “We’ve gone to the movies and hung out at the mall. She’s come to my house for dinner, I’ve gone to her dance performances,” says Moe, a Columbia resident and counselor at Jeffers Hill Elementary School.

Moe meets with Tanya four hours per month. There are also monthly life skill sessions for the two as well as monthly mentors’ meetings. It’s more intense than Moe, a St. John member, expected when she agreed to become a mentor eight years ago. But she doesn’t mind.

“I wanted to give back to the community. I was hoping to make a positive difference in a young person’s life,” says Moe, who had mentored two other children before Tanya.

St. John’s mentoring program was founded in 1992 to address the poor school record of young African-American males. In 2005, the program expanded to include females. The goal, though, stayed the same – to help youth at risk of academic failure, said Carolyn Gayle, associate leader for the program that has won state and national recognition.

African-American children in grades six through 12, from low- to moderate-income single-parent households in Howard County are eligible, says Gayle. Mentors are African-American men and women, matched one-to-one with boys and girls.

Currently, there are 13 mentor and mentee pairs, split about evenly between boys and girls. In addition to the traditional mentoring, the program offers academic tutoring, field trips and a parent support group.

As for Moe, she and Tanya talk about her academics, peer relations and career aspirations. She’s now a high school senior, adds Moe, “so we talk about college.” Tanya, says Moe, “is an absolute joy.”

HOWARD COUNTY POLICE DEPARTMENT
Stephanie Wall figures she’s mentored at least 300 children, mostly girls, some in groups and others individually. Over the past 20 years, Wall, a sergeant in the Howard County Police Department, has been a mentor in the department’s outreach section, her sorority, Delta Sigma Theta,and local churches’ youth groups.

Currently, the Elkridge resident’s mentoring focus is the police department’s BearTrax program, which began in 1978 as a one-week day camp and has evolved over the years. The camp still exists, but since 2012, the program operates in six middle schools in the county.

Guidance counselors recommend children entering sixth grade. Their mentors, the police resource officers assigned to the schools, stay with them through seventh and eighth grades, serving as positive role models.

Until last year, Wall was a police resource officer in one of the middle schools, where she met with her mentees twice a month during the school day. Though the school program was an assignment, Wall says, mentoring has become her life. Even a single, positive influence at a critical time in a young person’s life can determine the path they take,” she says.

Wall talks from experience. When she was growing up, she says “there weren’t any mentors around” to help her avoid bad choices and the problems that resulted. Without going into detail, she says she recognizes that not every home is a happy one. She tries to spread some happiness to her mentees. “Some days, I am the only person who says something positive to them,” she says.

Wall continues to mentor youth she met through the BearTrax program. A few years ago, she met Darcy, a fifth grader so quiet and shy that her talents went unnoticed. Now an eighth grader, Darcy has blossomed into a leader, says Wall, with evident pride.

Wall has known Lydia, another mentee, over the same time frame. Now an eighth grader, Lydia struggled to fit in with the group, and peer pressure was getting her into trouble. The school asked Wall to step in. She made a lunch date with Lydia in the school cafeteria to talk about what was going on in her world. Wall built a rapport with the girl, encouraging her to resist temptations in favor of larger goals.

Wall established academic goals for Lydia, as she does for all of her mentees. “I don’t tolerate bad behavior,” she adds. Lydia, says Wall, “pulled herself together.”

A-OK MENTORING-TUTORING INC.
Chaya Kaplan has been a mentor with A-OK Mentoring-Tutoring Inc., since it began in 2003. She’s mentored a lot of children but one in particular stands out in her mind. He was in third grade, lagging in reading and math. After spending time with him, she found that he excelled in puzzles and games.

“I asked him what he wanted to do when he grew up,” Kaplan recalls. “He said, ‘Work at McDonalds,’ because that’s what he was familiar with. I told him, ‘You may start at McDonalds but you’ll rise to be manager.’ His eyes lit up,” says Kaplan, who stayed with the boy through fourth grade, when he moved out of Howard County.

A retired social worker and Columbia resident, Kaplan is now the administrator/ volunteer coordinator of A-OK, the only paid position in the program she helped to found. In 2009, the program became a nonprofit organization, allowing it to become a formal partner of Howard County Public Schools.
In the 2013-2014 school year, A-OK had 95 mentors in 14 elementary schools and three middle schools. The schools select children with academic issues and/or poor social skills who would benefit from the interaction.

Mentors meet with their mentees once a week for 45 to 60 minutes during the school day. Mentors are mostly women, the majority from Columbia, with some from Laurel and western Howard County.

A-OK prefers to start mentoring when a child is in elementary school so mentors can stay with their mentees for two to five years, says Kaplan, who now works with a sixth-grade boy she began mentoring in second grade.

Kaplan also currently mentors a fourth-grade girl. The girl is sweet, Kaplan says, but sensitive and easily hurt. “We play games and read books. When I get to know her better, we’ll talk about things that upset her and how to respond,” says Kaplan. *