All In the Family

Going into business with a sibling can be challenging and gratifying. 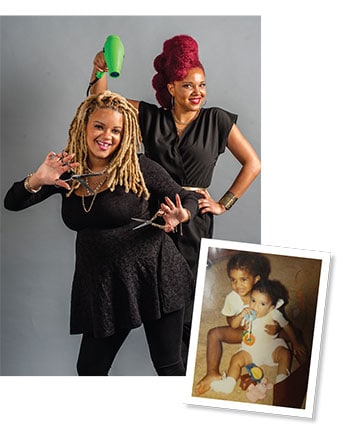 Annette and Melissa Roche grew up helping their mother do hair – initially at home and then in her African braid shop. At times, the Congolese-American sisters would start braiding hair on either side of a client and race each other to the middle. “We didn’t have a choice,” Annette Roche says. “She said, ‘Come help me braid.’ And you don’t talk back to your parents. You do what they say.” 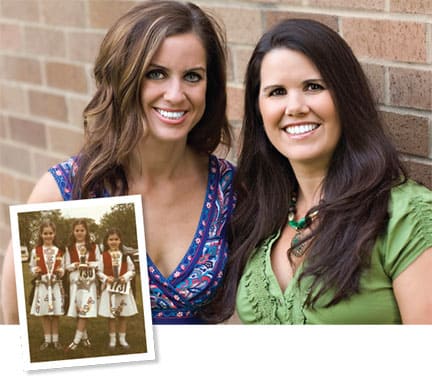 As daughters to Irish parents, sisters Maureen Gately and Kathleen Young learned traditional Irish dance as children. They tested their skills in competitions and, being close in age, often performed against each other. “Me and Maureen definitely had a lot of rival competition going on between us when we would dance,” Young says.

Today, both pairs of sisters have turned their talents into a living — working together as business owners. Gately and Young now own the Teelin School of Irish Dance in Columbia, and their older sister, Eileen Narvell, is also on staff. Sisters Annette and Melissa Roche own NappStar, a hair salon specializing in locs, natural hair and braid styles, with locations in Columbia and New York City. For some, a sister may appear to be the perfect partner. While the decision to start a business with a sib may not be suitable for everyone, for some sisters, it seems to work.

For identical twins Pam Ehrenfried and Penny Schmit, who own Serendipity, a gift and 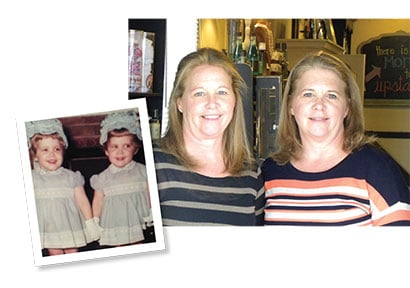 clothing boutique in Highland, co-ownership is an opportunity to work alongside their best friend. “No matter what it is, we get along, and we enjoy being together,” Ehrenfried says. “Having a business together is kind of like icing on the cake for us.”

Like friends, sisters and family members often share a certain trust and loyalty, both essential in running a successful business. “You can always trust and know the person has your best interest,” Melissa Roche says. Also, when it comes to dealing with money, if you can’t trust your family, who can you trust?

Family members, says Tina Corner, founder of LXCouncil Inc., a national organization that develops and leads peer-to-peer CEO advisory groups, are “most likely not going to steal from you.”

Sisters Rubina Alvi, M.D. and Samia Azhar, D.D.S., who own Family Medical and Dental Wellness Center in Elkridge, serve as each other’s a support system. “We can talk to each other, and we can discuss. And that’s a very positive thing,” Dr. Azhar says.

For Penny Schmit, the communication with her sister is more open than if she spent her days in the boutique with someone else. “We are honest with each other, and we tell each other how we feel. So that works for us,” she says.

Still, going into business with a family member can bring issues other businesses don’t typically face. In her time working with family companies, Tina Corner has developed advice for relatives looking to go into business together: Don’t do it. “If you truly value your family relationship, it’s much better to keep your family relationship – which is personal – separate from business,” Corner says. Oftentimes, she says, disagreements don’t remain in the office and can even affect other family members. “There’s no such thing as after work,” she says, a time that people typically let go of stress. Problems in the workplace, she says. “carry over into your personal life.”

Melissa Roche says she and her sister, Annette, have experienced tension, mostly when they first opened NappStar. “When there are disagreements you know that it can only go but so far,” Melissa says. “Annette’s not going to walk out on me and never come back. She’s my sister. She has a certain amount of love for me. And no matter what we argue about, we know we’re in this together.” 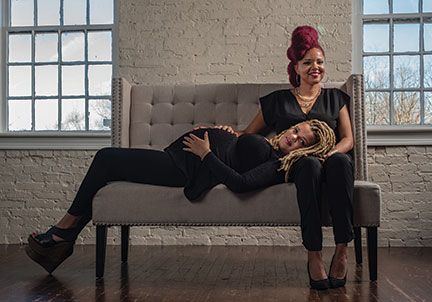 For other sisters, separating business from their personal lives can, at times, be challenging. “You kind of forget about sometimes like we just need to talk as sisters and not always talk about the business,” Kathleen Young says. Her sister Maureen has a different take. While they are both passionate about their Irish dance business, she says, “We make sure we have sister time. And we really make an effort to find a balance.”

Another issue for family-run companies, Corner says, is when a relative takes on a role without having the necessary skill set. “It creates issues with resentment by other employees in the company. They are not able to do their job well, and they know the family member is just being catered to,” she says. And if action needs to be taken against an employed relative, Corner says it can be difficult. “The family member can’t discipline another family member. You can’t put them on probation. They can’t dock their pay,” she says.

When Rubina Alvi, M.D., and Samia Azhar, D.D.S., were starting their business, they received more negative comments than positive. Dr. Alvi says she and her sister would hear remarks like ‘you don’t want to do business with family.’ “But we knew each other, so we always thought that we can do it,” she says.

Whether providing health care, teaching Irish dance, selling gifts and clothing or styling hair, these siblings are proud to call their sisters business partners. “I just really enjoy working with my sister, and I couldn’t imagine working with anyone else,” Annette Roche says.*

SO HOW DO SISTERS MAKE OWNING A BUSINESS WORK? HERE ARE A FEW TIPS:

Communicate beforehand. Make decisions prior to the company’s creation on issues like individual roles and responsibilities, compensation, who has what decision-making power and what happens when disagreements arise. When you discuss “and you know how you’re going to handle rough patches, then you’re going to have a great partnership with your family member,” Corner says.

Create a buy-sell agreement. The agreement should state what should happen if an owner leaves the business. Families, Corner says, often “think they’re an exception, and they’re not.”

Visualize the vision. Where do you see the company in the future? “If they’re not aligned in the vision, the company’s going to go nowhere,” Corner says.