Women are helping to shape the future of police, fire and rescue 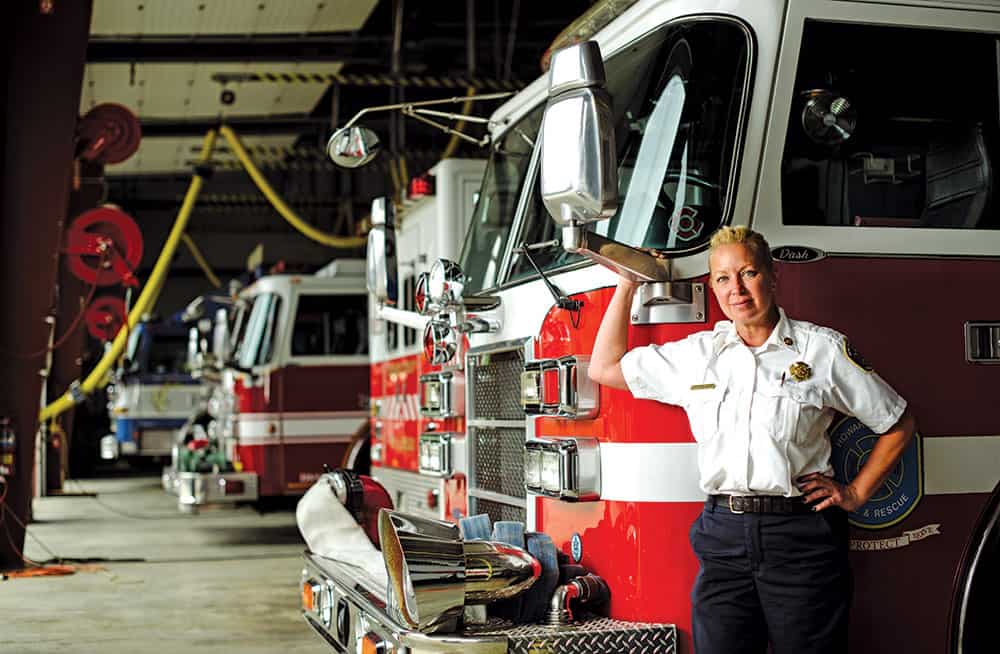 Assistant Chief Christine Uhlhorn is a 29-year veteran with the Howard County Department of Fire and Rescue Services.

On a hot July day in Marriottsville, two teenage girls dressed in firefighter’s turnout gear and hot-pink helmets directed a fire hose at a blaze erupting from a metal car frame. It wasn’t an emergency, it was a live burn demonstration during a two-day fire camp hosted by the Howard County Department of Fire and Rescue Services at the James N. Robey Public Safety Training Center.

Attracting more than 50 girls ages 8 to 16 across two sessions, the 1st Alarm Fire Camp included CPR training and certification, a fire extinguisher class and insight into a career that has been dominated by men for generations.

The goal, says Christine Uhlhorn, is to empower girls. “We want them to believe in themselves.” Even so, says the assistant chief of the Howard County Department of Fire and Rescue Services Logistics Bureau, “We would also love to plant a seed early” for a potential career in the fire service and public safety.

With a 29-year career in fire service, Uhlhorn holds the cause of getting girls interested in fire and rescue close to her heart. And since she launched the camps in 2016, she has shared the curriculum with other fire departments in the state and across the country. 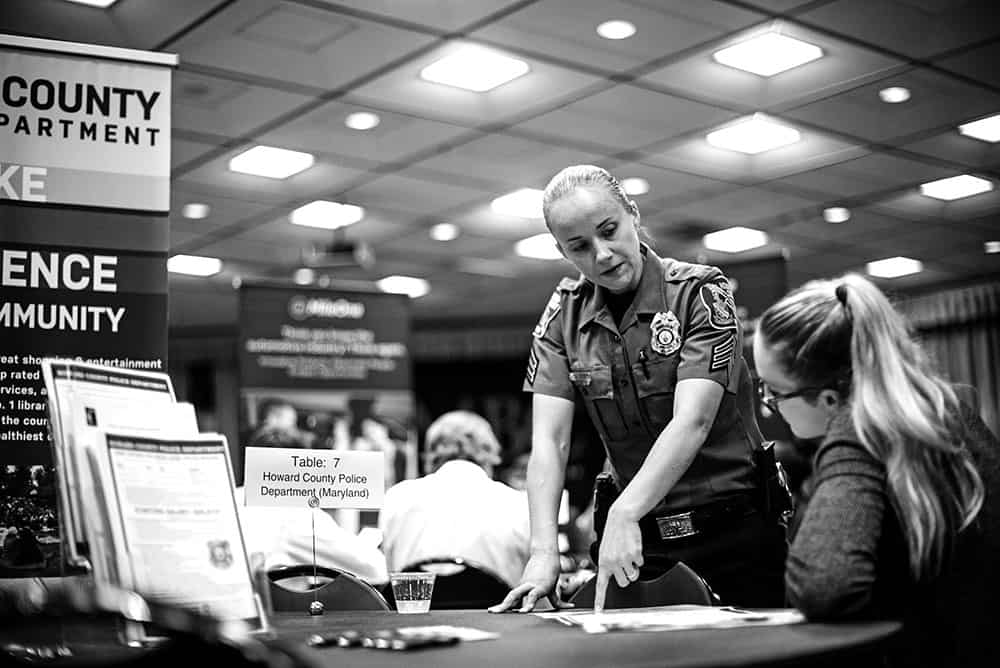 Sgt. Kimberly Bennett, who has been a police officer for 12 years, has recently moved into recruitment where she works to create a diverse force and recruit more women.

A Passion for Service

Sgt. Kimberly Bennett shares Uhlhorn’s commitment to inspiring young girls. A member of the Howard County Police Department for 12 years, Bennett has worked in both day and night patrol and served on the child sex crime unit. Bennett says she has always liked to help others. “I know it’s cheesy, but it’s true,” she laughs.

As her senior year at Goucher College drew to a close, Bennett, a psychology major, says she was trying to decide between graduate school and looking for a job. Strolling through a job fair, she came across the tables for careers in the police department. “It made sense to me that police work would be a good fit,” she says. “I’ve always played sports and like being part of a team, so that’s kind of what drew me.” Plus she likes the daily schedule: “It’s not your 9 to 5 desk job,” she says. “You’re busy helping people all day long.”

A patrol supervisor in Columbia, Bennett oversaw a platoon that typically handled 400-500 calls for service per month. The squad of 5-10 people, she explains, works like a team. “You’re working 12 hours a day together, so you build a close working relationship learning to trust each other and rely on each other just like any sports team.”

Over the years, Bennett’s passion for helping others has extended from the community she serves to mentoring younger members of the police force, a task she finds unexpectedly rewarding. Her background in criminal investigation means she can help new recruits write their first search warrants and help them with investigations. “I help them to think of resources or ask questions they wouldn’t have thought of yet,” she says, comparing the feeling to being a parent. “Watching them develop—it’s kind of like having kids and watching them grow and do things on their own without needing you.”

Female first responders like Bennett are helping to attract a diverse pool of talent to the career. In her new position as recruitment section supervisor, Bennett looks for those who, like herself, don’t have a family history or existing connection to police work.

Bennett says she herself came upon police work unexpectedly. She tries to make sure new recruits know that policing is a solid career. “There are a lot of different opportunities within police work and within the department,” she points out. Besides, she says, “I’ll be here for at least another 15 years, so I want to help make sure I’m surrounded with other good people.”

“I knew there was never any other career option for me,” says firefighter Uhlhorn. As a kindergartener she drew a firetruck when asked what she wanted to be when she grew up. Her mother still has the drawing. Her father, grandfather and great uncles comprise more than 250 years of fire service, Uhlhorn says. It never occurred to her to pursue any other career.

But in the early 1970s, when Uhlhorn was ready to join, the fire department remained exclusively male. But it didn’t occur to her to give up her dream. “At that age, I didn’t know that I couldn’t do it,” she recalls. “I was lucky because I had a father and mother who told me I could do anything, even though there were no career women in the fire service.” (In fact, the first paid career firewoman was hired in Virginia in 1974.)

Along with following in her father’s footsteps, Uhlhorn was driven to help others. “I can remember when I would be driving into work as a firefighter on shift work, I would always say, ‘Please let me make a difference, a positive difference, in somebody’s life today.’”

Early in her career, Uhlhorn responded to a medical call during which she successfully resuscitated a young boy in cardiac arrest after a near-drowning. “His family would come back to the fire station and visit me on holidays for years,” she says. She was able to see the boy as he grew up.

As a 21-year-old rookie, the only woman on a seven-person shift at the Long Reach Fire Station No. 9 in Columbia, however, Uhlhorn faced some unexpected challenges. She came out of the academy expecting to be one of the guys, she says. But the fire department culture resisted change. “It has so many deep-rooted traditions and women were a huge change.” The men, she says, “weren’t logistically, let alone mentally, prepared to accept it.”

When she first began shift work, where firefighters arrive at 7 a.m. and work for 24 hours straight—living, eating and sleeping as a team—Uhlhorn says she was shocked that firehouses had shared bathrooms, communal showers and bunk rooms with no privacy. There were no women’s uniforms, much less shoes, so she was forced to order the smallest men’s sizes she could make fit.

Uhlhorn credits the work she and other women in fire service have put into making the career safer and more comfortable—and therefore more desirable—for women. Howard County is home to St. Florian’s Brigade, the only local chapter in the nation of the International Association of Women in Fire and Emergency Services. Uhlhorn serves as its president.

Since its origins as the Women’s Issues Committee in 1992, the group has advocated for changes like Jack-and-Jill bathrooms, lactation policies for new mothers and gear that’s custom fit to each firefighter. 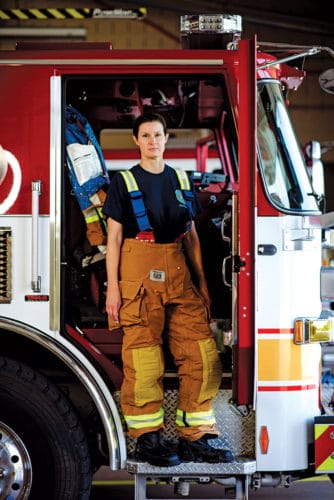 Lieutenant Amy Breznak, on a shift at Bethany Fire Station No. 8 in North Ellicott City.

Today, the group has 29 members and is open to both men and women as well as career and volunteer firefighters, says Lt. Amy Breznak, vice president of St. Florian’s Brigade. Breznak joined fire service more than 20 years ago as a volunteer firefighter in Prince George’s County while studying criminology and criminal justice at the University of Maryland. In 1997, at 24 years old, she was hired by the Howard County Department of Fire and Rescue.

Before moving to Fire and Rescue headquarters in Columbia, Breznak was the lieutenant on a shift of seven people at the Bethany Fire Station No. 8 in northern Ellicott City. While her shift had two women, including herself, Breznak says many shifts still have just one or no women. Even so, she says, young women entering the fire service today have it better than days of old. Women in recruit classes are offered female mentors from ranks, she says. “So that person is there to answer any question they come up with.”

While the culture is changing as more and more women become first responders, the daily work and devotion to public service remains strong. “I’ve always believed in service, and this career is a great combination of being able to serve the community and serve each other,” Breznak says. Each call—big or small—means something, she says. “Even if the call seems insignificant to us, knowing that we made a difference in someone’s day is satisfactory.”