Steer-Tech wants to help you find your space

Anuja Sonalker’s new technology means she can let the car do the driving.

Anuja Sonalker and I sit in the back as the white Ford Fusion creeps across the parking lot at five miles per hour. The car comes to a stop and I giggle nervously as the steering wheel spins to the left. It’s a bit freakish for someone who has never been a passenger in a self-driving car; it’s as if a ghost is in the driver’s seat.

“So, would you send your kids off to school in an autonomous car?” I want to know.

“I would,” she says. “I think it’s such a safe vehicle.” She pauses. “But the mommy in me would want to kiss them goodbye.”

Steer-Tech, which Sonalker founded in 2016, is all about saying goodbye to your car. If you’re going to a meeting, getting on a plane or running into the mall for an errand, your Steer-equipped car will drop you off at the curb and navigate its way to a parking spot, waiting there until you summon it back with a few taps on your cell phone.

“Parking is a pain point,” Sonalker says. “Who among us has not been late to a meeting or missed a train—or all of the above—because you spent 15 minutes trying to park?” She settled on this niche after looking at the larger autonomous vehicle industry, which is focused on complete, or level 5, autonomy (on a scale of 0-5, where the lowest level is completely driver controlled). “For example you say you want a cup of coffee and your car knows. It takes you to the nearest Starbucks.” That world, she says, is a ways off. “The infrastructure hasn’t caught up. Regulation hasn’t caught up. The insurance industry hasn’t caught up.” Perhaps most important, she points out, “Our psychology hasn’t caught up.” 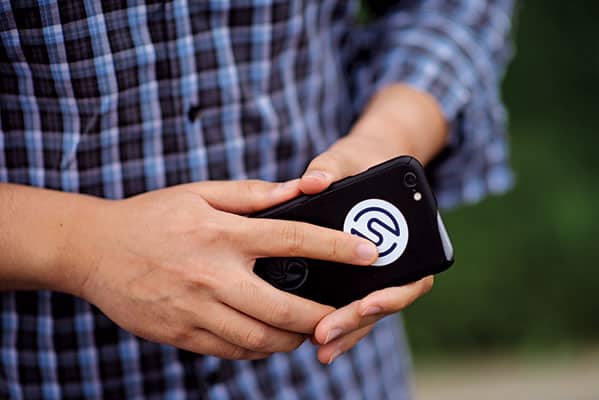 A Steer-equipped car can be summoned with the phone app.

Steer comes in at level 4, meaning a vehicle is completely autonomous, but not necessarily equipped for every driving scenario. The company’s technology can be wired into any car manufactured since 2011, Sonalker says, and is expected to be available by late 2019. The installation kit will be free, but using it will require a monthly subscription. “We’re still working on pricing models,” she says. “It has a hyper-local sensitivity. Someone in New York would value parking very differently from someone in Howard County.”

In August of this year, Sonalker entered an agreement with the Howard Hughes Corporation for the 4.9-million-square-foot Merriweather District to designate part of its parking garage for Steer-operated cars. The largely pedestrian community is a good fit, Sonalker says. “There are multiple places where people can be dropped off, and when you’re ready to leave, your car will come get you.”

The company has also been testing the technology at BWI-Thurgood Marshall Airport, thanks to an agreement with the Maryland Department of Transportation. Meaning you will be able to step out of the car at the congested curbside and walk right up to the counter to check in. “Your vacation starts there,” Sonalker says. “Your car figures out how to park itself.”

Sonalker has been in the so-called “car space” since 2011, when she worked on intrusion detection systems for Battelle, coming up with ways to prevent cars from being hacked remotely. In 2015, after a Wired magazine reporter wrote about how the Jeep Cherokee he was driving was taken over and driven into a ditch by hackers in a controlled demonstration, Sonalker was summoned to Capitol Hill to brief congressional teams about the potential for automotive malware.

“Most vehicles have a data network, and we were focused on those vulnerabilities,” says Brett Bosley, who was senior vice president of Engineering and Technology Commercialization at Battelle—a nonprofit company whose mission is part funding research and innovation, part commercial—when Sonalker worked there. “It’s absolutely terrifying.” At the time, he says, Sonalker was working on ways to retrofit susceptible cars—namely those with electronic systems—to harden them from attacks.

Steer technology essentially does the opposite, allowing the user to remotely control an automobile, rather than protecting it from such intrusion. “As a model for a small company, it’s pretty good business insight,” says Bosley. “Everyone can understand the notion of sending their car off to navigate the pain of parking.”

As her supervisor, Bosley saw Sonalker driven to “solve hard problems,” he says, many of them focused on practical outcomes. In a company with a mission of experimentation and innovation, he points out, “Not everyone is concerned about creating something that goes into use.” Sonalker, he says, “had a balance between knowing what is possible and driving toward an outcome, and that set her apart.”

Besides, Bosley says, “She’s one of the smartest computer scientists I’ve ever met.” Though he admits that he himself is not in that category, he says, “I know enough to know it when I see it.”

Sonalker has always relished the idea of using technology to solve practical problems. “I did watch the Jetsons during my formative years,” she admits, laughing. “It had an effect on me.” As a “techie” child, she says, she loved the opening segment of the mother, Jane Jetson, getting dressed.  “She was on that conveyor belt and the robotic arms were holding out her clothes. That image is frozen in my mind.”

The one thing that cartoon didn’t have, she recalls, is people of color. “That was the era when they didn’t have politically correct cartoons.” Born in Mumbai to Indian parents, Sonalker grew up in Bahrain, where her father worked in the aerospace industry. She and her two siblings attended high school at the English-speaking Indian School of Bahrain. Though she only spent four years in her home country—attending the University of Mumbai beginning at the age of 15—Sonalker feels connected to her culture. Even so, she questions some ideas she grew up with. “As an Asian woman, I was brought up thinking our wishes come second to men’s, that our role is to be the person who makes the sacrifices,” she says.

After receiving her bachelor of science in engineering in Mumbai, she went on to earn a masters in computer engineering at North Carolina State University and a Ph.D. from the University of Maryland.

David Balenson met Sonalker at a career event at UMD, where she was presenting her work in the area of intrusion detection. “She had a sparkle in her eye. Her energy and enthusiasm appealed to me,” says Balenson, who hired her to work in Internet security at Sparta, Inc., a defense contractor where he was senior vice president. He remembers her as being quiet and diligent, and worried that sitting at a desk doing research and writing reports for government agencies may not have been the best fit.  Sonalker remembers that time differently. “When I met Dave I was a shy person. But when you talk to me about something I love, like my children or my work, I turn on like a lightbulb.”

When she began working in the automotive area at Battelle, Sonalker says, she found her calling. “I had this aha moment,” she says. “Whether you are a doctor, plumber, student, engineer or stay-at-home mom, transportation connects us to our lives.” Indeed, she speaks with enthusiasm and I can imagine her pitching her business plan. “To not have mobility is a disability. I want to be there to empower people,” she says, including seniors, the visually impaired and those with other disabilities.

For Sonalker, this is personal. She and her husband, Manoj Srivastava, a vice president in engineering at the cyber security firm Tenable, live in Ellicott City with their two sons, one of whom was born with Down syndrome. Autonomous vehicles will allow her son to enjoy a more active life, Sonalker says. “It grounds me to feel I have a role to play in this field.”

Sonalker helps future female scientists as a mentor with the Scholarships for Women Studying Information Security (SWSIS) and by taking part in the Maryland Scholars Speakers Bureau, visiting schools to inspire girls to enter STEM fields. Throughout her career, she herself has had plenty of mentors, though all have been men. At the T. J. Watson center, the research arm of IBM, Sonalker says she worked with “crème de la crème” experts like Erik Mettala, who is considered one of the fathers of the Internet, and David Safford, a cyber security expert. “They never saw my gender,” she says. “They saw a person with passion and potential.”

When hiring employees for her own company, Sonalker says she looks for similar qualities. “Is this a problem that will keep them up at night?” she wants to know. “Are they driven because all they see is this?”

Right now, I’m watching the backup camera on the computer monitor anchored to the front dash of the sedan. The screen shows the painted lines of the parking spot as the car slowly glides into space, perfectly centered between the markers. I wonder, is the future of automobiles really about autonomous vehicles? Will all those human-driven cars on the highway today be replaced one-for-one with vehicles in which the human sits comfortably in the back reading a newspaper?

“The American automobile is the symbol of our independence—and our roads were developed with that in mind,” Sonalker says. “Mass transit is more of a culture you see in Europe and Asia.”

Yes, she acknowledges, these days “There’s an entire generation of young adults who don’t drive.” But once they get older, “when they have a dog and a job and a mortgage,” she says, “They’ll want a vehicle they can leave their stuff in.”

Anuja Sonalker doesn’t know for sure if America’s love affair with cars is sustainable, but she does know this: Parking is a pain.