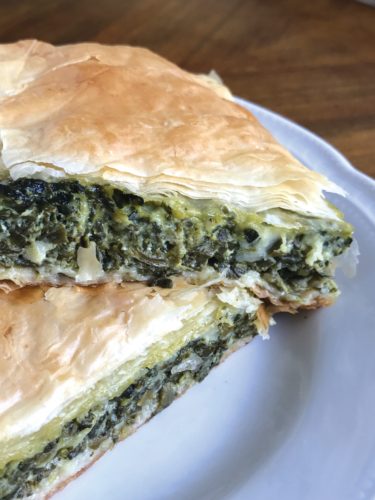 Dwyer grew up in a restaurant family. Her parents owned a handful of places, including a steakhouse in Washington, D.C. She had always dreamed of opening up a cafe so she bought the building, which dates to 1890. Then the 2016 flash flood happened, filling her new property with four feet of water.

Fortunately, major renovation work had not yet begun, but even so, the damage set her dreams back a year. In rebuilding, says Dwyer, “We are mindful of water coming in and how we can prevent it.”

Opened in early September and named for her mother and daughter, Georgia Grace Cafe features Mediterranean cuisine with Greek influences. Dwyer’s parents were both born in Greece so the souvlaki and spanakopita come from family recipes. Open for breakfast and lunch in a quick service format, the restaurant also features flatbreads, salads, soups and coffee.

The café seats around 50 people, and Dwyer, whose background is marketing and advertising, is aiming for a European ambience. “I want customers to experience my food but also enjoy the environment,” she says.