Lena Munther never does the same thing twice. The Swedish interior architect based in Howard County says, “Even when a client comes to me and says they would love something similar to my previous work, I always try to make it custom, so each client gets their own feel and their own touch.” 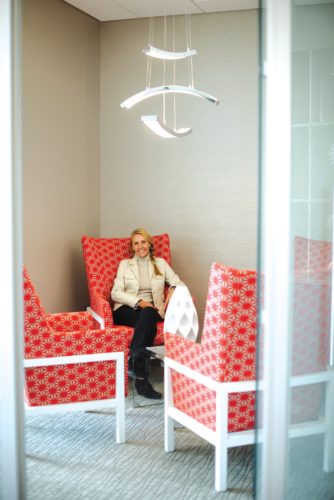 This custom approach won Munther the attention of restaurateur Steve Wecker, who hired Munther for his long-awaited project at One Merriweather. Cured, a farm-to-table restaurant, and Eighteenth & Twenty First, a speakeasy, are slated to open in January.

Since establishing her Maryland firm in 2003, Munther has grown to a team of three, all women, and completed ground¬breaking local projects including FX Studios Salon & Spa in Hunt Valley and the Creig Northrop Team offices in Clarksville.

From a desk in the office—a remodeled garage adjacent to her Highland home, a space flooded with natural light from windows on three sides—Munther gestures toward two concept boards loaded with material swatches.

On one, concrete with a matte, leather-like finish; a scrap of copper metal; and a photo of factory-style windows show the hip and industrial vibe planned for Cured, a toe-to-tail butchery focusing on Old World methods and forgotten cuts. The design will incorporate rustic materials, including wood milled from trees that once grew on the site. “It’s a combination of modern touches with classic, old-style finishes,” explains Wecker, owner of Columbia’s Iron Bridge Wine Co.

Past Cured’s custom-designed wine cellar made of factory-style glass, a hallway leads to the jazz speakeasy, Eighteenth & Twenty First. Its inspiration board channels the Roaring ’20s through sumptuous textiles, and deeper colors and textures. “You can just see, looking at the colors and heavier materials, that it’s richer and darker,” says Munther. “It’s the old Gatsby style, but it’s done in a functional, more contemporary way.”

The two restaurants, each unique in design and price point but sharing a kitchen, grew from the expansive space available on the ground level of One Merriweather, a 208,000-square-foot building anchored by MedStar. At the corner of Broken Land and Little Patuxent parkways, it’s part of the larger Merriweather District, an urban downtown development by Howard Hughes Corp., which is leading a $2.3 billion revitalization of downtown Columbia.

“I didn’t want a flat-out restaurant designer, because what I’ve discovered with some of those designers is they all kind of look the same, and I didn’t want the same,” says Wecker, whose business cards read “Idea guy.” He continues, “I wanted someone who would take our thoughts, our input, and incorporate it into the design—somebody I could work with closely.”

More than seven years in the making, the restaurant and speakeasy will bring a unique experience to Howard County diners and denizens of nightlife. “We’re trying to do some things that haven’t been seen locally,” says Wecker.

With a background ranging from luxury cruise ships to state-of-the-art veterinary hospitals and homes built from the ground up, Munther’s designs are anything but cookie-cutter. 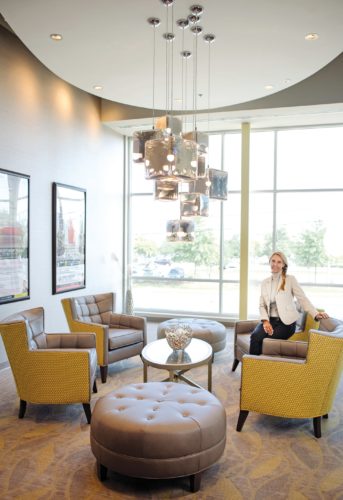 Born in Sweden, the designer has been putting pencil to paper since she was 6 years old. “It was just natural to me to always draw on something,” she recalls. After graduating from London’s Chelsea School of Art and Design in 1984, Munther worked on cruise ship designs for Cunard Cruise Lines among others with an 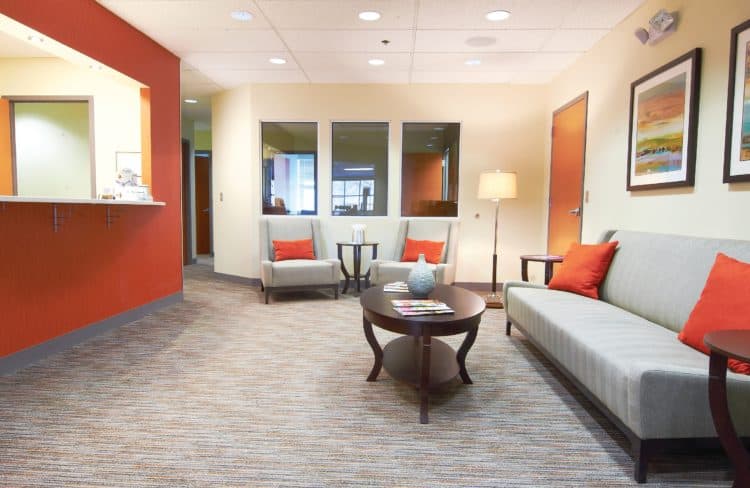 There, she learned to design amid the industry’s technical limitations—think confined spaces, no right angles and limited natural light. The training, she says, has endured throughout her career. “I thrive on challenges. I like when it gets a little tricky and I have to figure something out,” Munther says.

By avoiding pigeon-holing herself into any subspecialties in the industry, Munther is able to approach each project with a fresh perspective—although, she says with a smile, word-of-mouth has resulted in a growing number of veterinary-focused projects since she completed the Veterinary Orthopedic Sports Medicine Group facility in 2009.

She prides herself on listening to her clients. “It’s not about me, it’s not about my designs,” she explains. “The design is an extension of the client. It’s really their custom project that I put my spin on.”

Munther’s holistic approach and ability to translate a corporate brand into a physical space won over companies like Levi Strauss, one of her first clients after launching her own firm in Norway in the 1990s. The relationship lasted half a decade, encompassing the brand’s Nordic headquarters and several retail stores. She has continued to work on commercial projects.

Sometimes, though, a commercial relationship becomes more personal. Several clients have come back to Munther for help on residential projects, from kitchen remodels to the construction of a custom designed home. “We’ve already built a relationship,” explains Munther. “There’s a comfort there, and you can speak openly and honestly.” 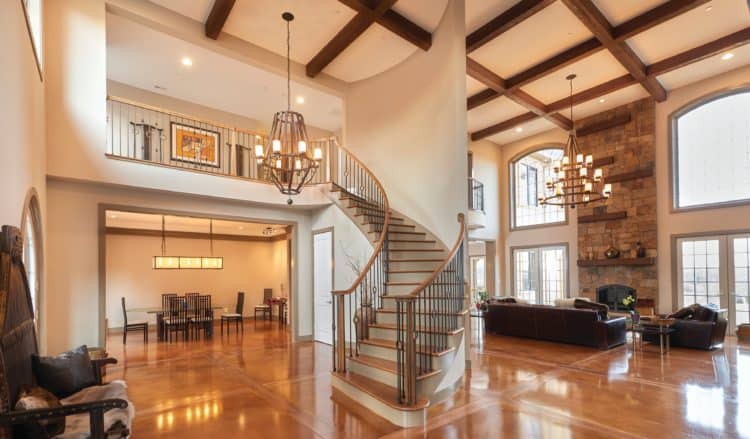 Drs. Sherman and Debra Canapp, for example, worked with Munther to trans¬form a 16,000-square-foot warehouse in Annapolis Junction into Veterinary Orthopedic Sports Medicine Group. Lacking the sterile, impersonal ambience of a typical hospital, the facility’s warm design focuses on comfort and function with a contemporary feel. It won an award for veterinary design in 2010, and gave rise to a string of veterinary- and healthcare-focused projects for Munther Design.

Wanting to move closer to their new facility, the Canapps returned to Munther for help designing and constructing their 12,000-square-foot “Medieval meets modern” home, completed in 2015. A grand staircase anchors the large, open living space with double-high ceilings. Polished and stained concrete floors with wood inlays echo beams on the ceiling, while a custom-designed iron chandelier grounds a regal-yet-intimate seating area in front of a stone fireplace surround.

“They are very well traveled and have an eclectic, fun style,” says Munther. The couple brought ideas from abroad and asked the designer to incorporate them in the home design.

Whether commercial or residential, the Munther Design process involves bringing many ideas together into a cohesive concept. “Lena’s been a terrific partner,” says Wecker. “She’s overseeing the whole project, keeping everybody on pace—plus she’s incredibly organized and a ton of fun.”*.

When it comes to the home, how can I determine my personal style?

Don’t be afraid to ask questions when you see something that catches your eye. Interview yourself and say what do I like? What do I tend to come back to? If you follow that, you will develop a personal style and a baseline. Then, stay true to your baseline. Don’t be afraid to try something new, but maybe do it in a subtle way so you can live with it longer.  Otherwise, you’re led by what you see out in the marketplace.

What about designing space for entertaining?

I love having people around me, and we always open up our house to guests. I recommend an open practical area with materials that can take abuse. This will help relieve the host from running around protecting their home during gatherings. You can always make things pretty, but first think about whether they are practical. Another consideration is the ability to seal off floors and rooms, especially if you have family members who need to go to bed or get up before the party starts or ends. Many people like to have private and public spaces.