My sons, 25 and 27, have recently been attending bachelor parties, as you might expect at their ages. You’re probably picturing a bunch of guys 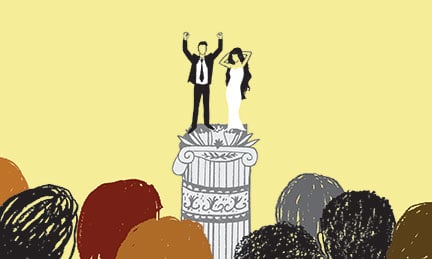 going to a strip club and getting the groom pie-faced drunk. Sorry, that is so 1985.

A 2016 bachelor party is more likely to be a four-day affair involving a group of bros, as they surely refer to themselves, travelling to a fancy destination where they engage in high-end outdoor activities, organized games and gourmet dining … along with the usual partying. Skiing in Aspen, a waterfront mansion at Deep Creek, a parade of debauchery in Vegas or New Orleans.

Not to be outdone, the bachelorettes head for Miami or the Inn at Perry Cabin, replacing the wakeboarding with spa appointments and the single-malt scotch with margaritas.

This pair of extravaganzas is just one element of the mega-weddings put on by the millennial generation. It begins with a ring, of course – a big one, preferably costing $10,000 or more. Next comes the wedding website. Save-the-Dates are mailed out in the form of photo-magnets or some other type of swag. Then come the engagement parties and the showers, which are often co-ed. For a special gift to her groom, the bride may do a “Playboy” style photo shoot decked out in lingerie and jewelry. (Don’t believe me? Google “wedding boudoir.”)

Finally, the year of celebration culminates in a weekend wedding event with a series of dinners and brunches, all captured on film by hired paparazzi. Somewhere amidst the cigar rooms and the flying video drones is an actual legal or religious ceremony.

You might think the honeymoon would consist of checking into rehab, but it is more likely a week in Thailand. After which they release their sex video. (Now I’m just kidding. I think.)

How do they afford this? It’s not completely clear, especially since the wedding industry seems to have rushed to exploit this trend and now everything costs many times what it used to. Some of the kids have a lot more scratch and better jobs than we boomer parents had at their age, but even those of moderate means attempt some version, likely going into debt as a result. Perhaps they should replace the engagement ring with an engagement car.

The rocketing costs of marriage have led to a backlash among the pals roped in to participate in these spending sprees. One young woman I know wrote a screed called I Don’t Want to Be Your Bridesmaid and the main reason was “because I can’t afford it.” Another, who still has daunting student loans, provided a running tab: $280 for the dress, $500 spent on the bachelorette party, $200 for gifts, and she adds, “I haven’t even paid for hotel, hair and makeup yet.”

My son Vince explains this state of affairs by pointing out that his entire generation was raised to believe they are people of tremendous importance and interest – if not royalty, at least minor celebrities. Little girls were encouraged to identify with Disney princesses; little boys received gigantic trophies just for showing up at pee-wee soccer. If My Child Was An Honor Student At Whatever Elementary, it was broadcast to the world.

Furthermore, as they grew up, they saw regular kids like them featured on reality television shows such as the paradoxically-titled “Real World.” Other popular programs were essentially about spending money, like “Super Sweet Sixteen,” “Pimp My Ride” and “Cribs.” They learned how to throw a wedding from “The Bachelor” and “The Bachelorette.”

By the time they reached marriageable age, almost every one of these millennials had his or her own publicity machine – a combination of Twitter and Instagram feeds, Facebook posts, Snapchat stories, Vinesand other things I have never heard of. Using these media, they continue to obsessively document their outfits, their meals, their “bikini bodies,” their fitness goals, their nightclub appearances and their hangovers for the benefit of their “followers.” Once upon a time, you only had followers if you were Jesus. And you only took a picture of yourself if you had a photography class in college. Now a day without a selfie is a day you dropped your phone in the toilet.

The prevailing standard of privacy and modesty can be summarized in one word – Kardashian. But in fact, the millennial generation includes a whole echelon of people who are social media celebrities – models, beauty experts, filmmakers, rappers, fashion bloggers and “personalities” – many of whom you have never heard of. These people have hundreds of thousands of followers on Instagram, literally millions of hits on YouTube. Amanda Steele? Cameron Dallas? Bethany Mota? Gigi Gorgeous? I thought not.

YouTube is host to a whole genre of DIY reality TV series made by and for these enterprising young adults. For example, the pilot episode of “Bedford Stop,” according to “Entertainment Weekly,” “follows a group of recent college graduates as they pose for professionally shot Tinder profile photos, go to brunch to discuss Tinder dates and hit up bars to look at Tinder.” Strange but true.

After these young pseudo-celebrities marry in the lavish style described above, they have a whole new way to expand their brand – having children. Parents have always been camera crazy but in the millennial world the phenomenon has spiraled out of control. Because of what has been dubbed “sharenting,” 92 percent of American children have an online presence by the age of two. (I read this in a great new book about social media by Nancy Jo Sales called “American Girls.”) But again, there is a backlash – my son told me that as soon as one of his friends has a child, he and his bros delete the guy from all their groups to avoid the flood of cute baby pix.

My kids, their friends and their girlfriends were the expert sources for this article. One thing you got to give the selfie generation: They are very self-aware. You can try to make fun of them, but every time you’ll find they’ve beat you to it. *

Marion Winik’s ninth book, Highs in the Low Fifties: How I Stumbled Through the Joys of Single Living (Globe Pequot Press), came out in 2013; more information at marionwinik.com. A former Howard County writer-in-residence, Winik writes the biweekly “Bohemian Rhapsody” column at baltimorefishbowl.com.