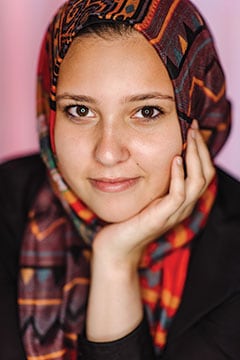 George’s County charter school in Laurel. Originally from Turkey, she moved to the United States five years ago. During that time, she lived in both Texas and Missouri before settling in the Free State. Subasi, 29, is Muslim and prefers to wear the traditional head covering.

“As a woman who wears ‘hijab,’ my Muslim identity is obvious,”
explains Subasi. But proclaiming that identity to the world is not
always an easy decision, she says. “Particularly because of the
prejudices that the media has implanted in people’s minds about
Muslims, I have to think twice before I do anything.”

Most women – of any culture or religion – struggle to find a sweet spot between individuality and conformity – a certain balance of personal flair and decorum that allows them to feel authentic, even when pressured to look young, have the right body – and above all, fit in. For women whose Muslim identity is part of their authentic selves, the stakes can be high.

The presidential primaries have helped to fuel a wave of Islamophobia across the country, in spite of the fact that Muslims comprise just 1 percent of the U.S. population, according to a 2015 study by Pew Research Center. We wondered to what extend the Muslim women in Howard County feel empowered to dress, speak and carry themselves as they wish in the community. The answers may surprise you. 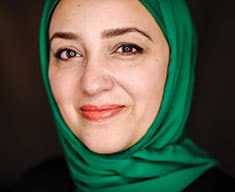 Many women, both in the U.S. and abroad, have echoed Subasi’s sentiment that they feel their comportment is somehow being viewed as a manifesto of Islam in society. But not all Muslim women wear hijab, “niqab” (which covers all but the eyes) or “burqa” (the covering that includes a veil over the face). In May 2015, “The New York Times” published the article Muslim Women on the Veil, interviewing Muslim women from around the world about their thoughts on head coverings. Some women began to wear the hijab later in life, while others once wore it, then later decided to stop. Some women are alone in their families in choosing the hijab, and some defy family tradition and go without. It comes down to personal choice and expression of faith.

Nevine Abouelenein co-owns a local culinary business, Misteka. This 38-year-old mother of three lives in Laurel with her husband and children. 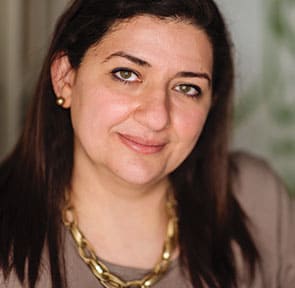 She grew up in Cairo, Egypt, and moved across the Arabian Peninsula to Qatar in early adulthood. Until age 23, she lived her life as a Muslim woman without covering her hair.  Not until after she married and started a family did she choose to wear hijab.

“It’s part of being modest, humble,” she explains. “It’s a personal feeling of being true to myself and true to my values.” Abouelenein’s 16-year-old daughter also chooses to wear hijab and feels comfortable doing so at her local high school, she says.

Sadida Ahmed, who grew up in Hyderabad, India, has lived in the United States for 35 years. After working in the corporate world and at the U.S. Census Bureau, Ahmed is an educator in the Howard County Public School System. Like some interviewed for “The New York Times,” Ahmed once wore hijab at all times, but now she relinquishes it for work. “I am more aware and cautious where and when,” she says, about choosing how and when to wear hijab.

That said, however, Ahmed now has time off to celebrate Muslim holidays. Recently, the Howard County 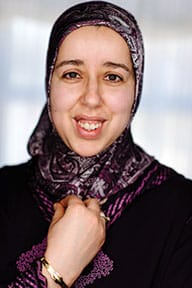 Board of Education added to its academic calendar days off for Lunar New Year, the Hindu holiday of Diwali and the Islamic holiday Eid Al-Adha, which will go into effect for the 2016-2017 school year. In 2011, the Columbia Association introduced women-only hours at an indoor pool; both Muslim and non-Muslim women have taken advantage of the segregated swim times. But not all community members see these changes as favorable.

Opponents from Howard County and across the United States bombarded the Columbia Association with hate speech in the form of calls and emails. The locally-based “Potomac Tea Party Report” even calls the separate swim times antifeminist, in violation of Maryland’s constitution and evidence that Sharia (Islamic law) “is creeping into the fabric of our society generally and is happening here in Maryland as well.”

In response, more than 60 leaders from People Acting Together in Howard (PATH), showed up to ensure that the Columbia Association Board of Directors upheld the swim time in spite of the harassment and
threats.

The controversy over pool hours is just one expression of a growing anti-Muslim sentiment not only in Howard County, but the rest of the U.S., heightened by the rise of GOP presidential candidate Donald Trump, who has suggested, among other things, banning Muslims from entering the United States (an idea that violates both U.S. and international law).

Last October, supporters of Global Rally for Humanity targeted Ellicott City’s Tar Al-Taqwa mosque with an anti-Muslim demonstration – one of nearly two dozen coordinated demonstrations at mosques across the country on the same day. Reports by the “City Paper” and the Baltimore Block twitter feed describe a
photo of rally organizer Mike White wielding a shotgun where he included the caption, Hunting Muslims.

In her “Huffington Post” essay, What It’s Like Having Your Mosque Targeted, writer and Howard County native Hareem Mannan poses a simple question in response to the rally. “Can you still really call a place 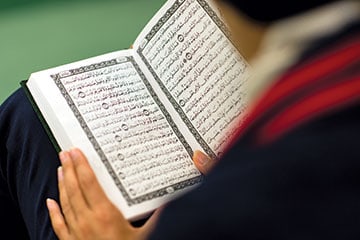 your home if you don’t feel safe there anymore?” She adds, “As a human being, firstly, I am personally offended, more so because the religion of Islam has done more to contribute to my humanity than any other aspect of my life.”

Abouelenein has noticed that conversations surrounding acts of terror are often one-sided in the media. “In every religion, there’s a weird group of people. In Christianity, in Judaism, in Islam you have extremists,” she says. “When something terrible happens, why do people say, ‘A Muslim did it!’? Why not say, ‘A crazy person did it?’”

PATH member the Rev. Paige Getty, a senior minister at the Unitarian Universalist Congregation of Columbia, said that some women feel anti-Muslim sentiment is worse now than in the aftermath of September 11.

Several women approached for this article either declined to comment or asked that their names not appear in print, citing fear of repercussions from their workplaces in and around the Howard County 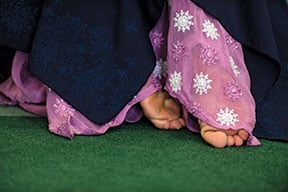 area. Additionally, many also declined to be photographed for the piece.

Imam Mahmoud Hady of Ellicott City’s Maryum Islamic Center, who is also involved with PATH, recently told Baltimore’s ABC affiliate WMAR, that women are experiencing extreme anxiety. “Some of them were calling me asking me if it’s okay to take the hijab, the cover, off.” But doing so is not the answer, Hady explains. “We need to get in touch with people more,” he says. “The solution, it will come with time as people get to know us as people, get to know about Islam.”

Abouelenein says she often asks Americans not to judge Muslim people by stereotypes they see in the media. Agreeing with Imam Hady’s sentiment, Abouelenein shares, “I hope that we, my family, can be a bridge between people in the media.” 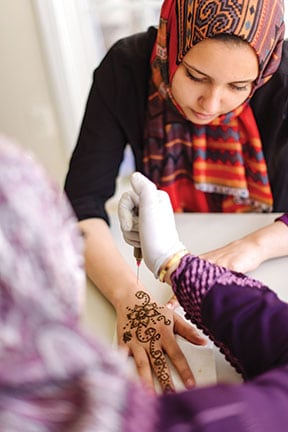 many Muslim women felt pressure to “tone down and blend in until everything blows over.” Instead, she says, she felt empowered not to change a thing. “You should not allow yourself to be bullied,” says Choudhary, who has faced her fair share of challenges. In addition to enduring questioning by airport security on more than one occasion, she had a dangerous encounter in Maryland. Several years ago, she and her mother, who both wear hijab, were driving home from the Eastern Shore, she recounts. “A couple of guys in a truck tried to run us off the road.” Even so, Choudhary says, her positive interactions with people far outnumber the negative ones.

“I have had random strangers approach me and compliment me for being who I am.” In particular, Choudhary has found her workplace to be accommodating, to both her prayer schedule and her dietary restrictions, provided, she says, “you are able to bring these needs to their attention.” She has never had trouble adjusting her schedule to make it to Friday prayer, she says, “and my employer approached me to see if I needed any special accommodations to fulfill my regular prayer needs.”

Similarly, Subasi feels comfortable wearing the hijab to work and saying prayers in her free moments during the day. But she acknowledges that the demographics of her school may play a role
in her interactions with students and their families.

“Roughly 80 percent of people at my school are of African-American heritage,” she explains. “I feel like they empathize with me,” in part she believes, as “they have gone through similar prejudices and have fought back.”

Subasi says that, for her, living authentically includes contributing to society in meaningful ways. Choudhary has volunteered at the Maryum Islamic Center. Ahmed also views contributing to her community as critical.

“I am a founding member of Education and Literacy for Minorities, a nonprofit to help all minorities access education,” explains Ahmed. The organization also helps people prepare for the Maryland drivers’ license test, the GED, U.S. citizenship tests and basic life skills. “I volunteer as the evening instructor to teach U.S. history in Urdu and basic English communication skills,” says Ahmed, who can speak Urdu, Hindi and English.

Each woman has her own version of what it means to live authentically. For some this involves clothing choice, for others it’s loyalty to a spiritual path or simply reaching out to others. Some Muslim women in Howard County are comfortable being open about their religion, while for others, the threat of hate and persecution is too high. The experiences of these women reveal that living unhindered according to one’s culture, heritage and beliefs is a privilege not always extended to everyone.

As the Muslim community here continues to grow and evolve, these women’s experiences raise a new challenge: to embrace all versions of authenticity – in our neighborhoods, our places of work, our halls of worship and in our politics.*