Kids can learn about environmental stresses by studying whales’ ears 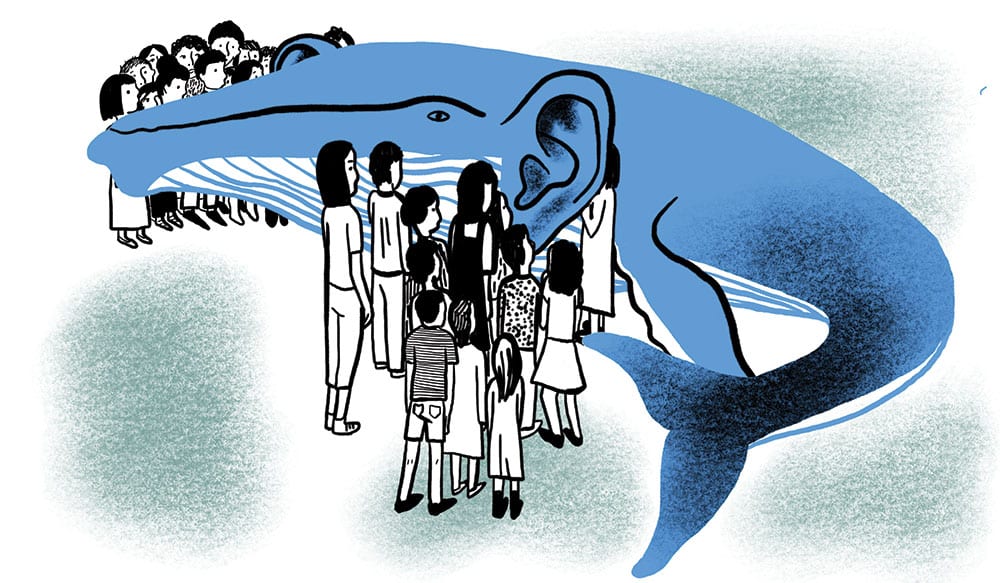 March is finally here, and I’m ready for the part where it goes out like a lamb. Our backyard is still draining from the nearly six feet of rain we got last year, and this winter hasn’t exactly been dry. It’s time for some warmth, sunshine and outdoor adventures—within limits.

I’m not exactly what you’d call a “nature girl.” Mostly, that’s because extended exposure to the elements tends to make me itchy and irritable. I’m like the prime rib station of the mosquito buffet•they line up to devour me. Poison ivy finds me wherever I go. And though I share DNA with people who take cross country ski treks through northern Michigan, I require long underwear and layers of socks for a midwinter dog walk.

I prefer my own trekking to take place on well-traveled paths within close proximity to climate-controlled spaces, but I still love the outdoors. More than that, I need to get outside in the fresh air for my own sanity.

Every other summer, my family rents a cabin at First Landing State Park near Virginia Beach. The park has its own beach, but for me the main attraction is the miles of trails through a vibrantly green cypress swamp. I’ve spent countless hours restoring my spirit along those trails, becoming ever more mindful of the interdependence between humans and nature.

We all require the quietude that can be found in a walk through the woods, a picnic by a pond or an evening watching the sun set over the ocean.

Every day, we hear plenty of dire predictions about the Earth’s future and not just in reference to climate change. Today’s kids are also presented in ominous ways, as if they all are umbilically attached to devices and have zero appreciation for the world outside their screens.

Sure, our kids live in a high-tech, plugged-in world. But they’re also increasingly aware of how our actions affect the environment. And most parents I know understand the importance of ensuring that our kids become adults who respect the resources that make life possible. The children of the world are already leading us where many adults fear to tread.

Last August, Swedish student Greta Thunberg began a weekly protest outside of the Swedish parliament building. She urged other students to join her until all nations come into line with the Paris Agreement. In December, Thunberg spoke at the United Nations climate conference, as thousands of students in Australia followed her lead.

Filed under the gross-but-true category kids love so much, earwax collected from whales can tell us the levels of stress they experienced during three major periods: whaling in the 19th century, naval warfare during World War II and the increased pollution of our own century.

We’re stressing out the whales•and if the consequences of our actions are visible even in cortisol levels found in the earwax of ocean mammals, they can affect anything, anywhere.

Stories like these are a good start. Experiential education is even better.

In Howard County, we’re fortunate to have access to resources that give kids the opportunity to see for themselves how they impact the nature that surrounds them, while learning how to protect the environment, conserve resources and advocate for change.

One of my family’s favorite places is the Robinson Nature Center, which offers summer camps, day camps and family events in addition to trails, touch tanks and a digital planetarium. My kids love the exhibit featuring taxidermized local species placed in replicas of their habitats. To each her own, I guess.

The Howard County Conservancy has two locations where adults, kids and families can participate in a variety of programs, hike miles of trails and visit a butterfly garden.

Columbia Families in Nature, part of the Community Ecology Institute, organizes free events, like group hikes and trash to treasure art projects, designed to bring families together with each other and with nature.

These organizations and the numerous parks and trails throughout our region make it easy to cut the cords and get outdoors. Unless, of course, it’s raining. Again.