When she was in fourth and fifth grade, Julie Elrod says she was beaten up by her classmates just 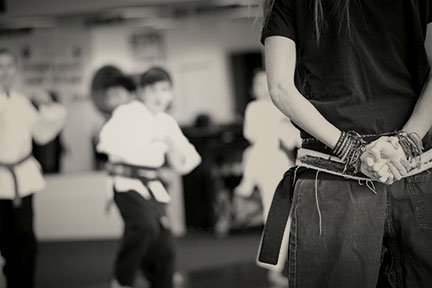 about every day. “Part of the issue was we had no money,” she conjectures. Her father had left the family, never to be seen again, and her mother raised two children on her own. The family had moved from rural Wyoming to Columbia when Elrod was a child and it wasn’t an easy adjustment. “I didn’t have the right kind of shoes on or the right kind of pants,” she says. “We couldn’t afford Levis and Calvin Kleins.” As she got older, the bullying gradually abated, but Elrod was determined to make sure it never happened again.

Today Julie Elrod, a ninth-degree ninjutsu black belt, can be seen coaching, instructing, boosting and cajoling her young (and not so young) students in martial arts. She and her husband, Ron, operate the American Academy of Martial Arts in Columbia and a second studio in nearby Maple Lawn. With more than 1,200 active students, it’s one of the largest schools in the region.

Elrod moves around the studio energetically, barking out encouragement. “Faster, faster, don’t hold back!” she cries. “You can do it! Good job!” Her combination of technical expertise and strong personality clearly help to motivate her students.

Athletic as a youngster (she played softball and ran track in high school), Elrod became interested in martial arts as a student at the University of Maryland, where she studied sociology and criminal justice. She joined a martial arts club for the workout and found the self-defense aspect appealing. “I had no confidence until I discovered martial arts,” she says. “When I discovered it, things really started to change for me. It has had a profound effect.” While many pursue martial arts as a sport, Elrod’s goal – and her teaching style – are about defending herself, she says. She trained aggressively, “breaking every bone in my body,” in the process she says. “It was pretty intense. I’m very extreme.”

Elrod began teaching martial arts in 1985 and received her black belt in 1988. “I was only a belt or two ahead of my students,” she laughs. “I don’t let my teachers do that these days.” At the same time, her style has “mellowed,” she says. “I’m smarter with the training. We train with mats, we don’t dive roll in parking lots.”

She traveled to Japan to train in ninjutsu – a 1,000-year-old practice that involves throws, kicking, punching and weapons – with Dr. Maasaki Hatsumi, who is considered a national treasure in his country for his calligraphy and art. “He is an amazing gentleman,” Elrod says. “The people I know who are very serious martial artists live their lives so peacefully,” she says, adding, “I don’t even like to kill bugs.”

Elrod has also trained flight personnel. After the tragic events of September 11, 2001, she helped to teach self-defense to American Airlines crews. Part of the training was teaching employees how to use materials at hand, such as seat belt clips and identification cards as weapons. 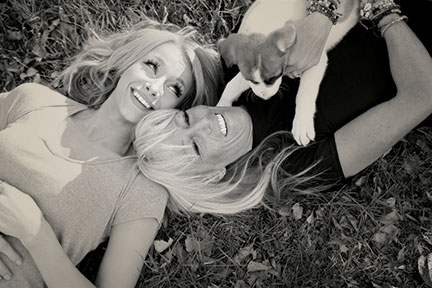 college. Instead of pursuing police training as she’d originally intended, she decided to teach martial arts for a living.

The American Academy of Martial Arts offers a range of styles, including ninjutsu and its Korean relative hapkido, judo, kickboxing and tae kwon do, with its emphasis on kicking. The school, Elrod says, teaches children to be assertive, but not aggressive – a fine distinction that ultimately may keep a bad situation from getting worse. Elrod, who realizes that talking to bullying victims about their experiences can help build confidence, frequently shares her personal experiences with her students. While the academy teaches the students how to defend themselves, says Elrod, the emphasis is not on winning a fight, but rather on doing the minimal amount possible to get away safely.

Among Elrod’s students are young people with physical limitations, some in wheelchairs, or who move about with the use of crutches. “I teach them to use their upper bodies, to pull the attacker in,” says Elrod, who taught a March of Dimes poster child a few decades ago. Even so, she emphasizes, “Every single class we talk about walking away. Fighting is the last thing you want to do.”

Area school guidance counselors and mental health practitioners often refer students to Elrod’s academy. “The number one reason is confidence. If kids are getting beaten up, they need to build their self-esteem,” Elrod says. “I‘m a huge believer in what it has done for me.” Elrod met her husband, an engineer, when he attended the academy as a student more than 23 years ago. He eventually quit his job as an engineer to work for the school.

Elrod opted to home-school her own two children and began teaching them martial arts when they were toddlers. Now, son, Wyatt, 26, a fifth degree black belt, and daughter, Kami, 23, who holds a fourth degree belt, are both instructors at the academy. While Elrod herself holds a ninth degree ninjutsu and was inducted into the Martial Arts Hall of Fame as a master instructor, the academy has made a conscious choice to de-emphasize titles in favor of confidence and skills.

There is also a conspicuous absence of trophies in the school. “Winning a tournament is not the focus,” says Elrod. For one thing, there’s a significant difference in the style required for tournaments and straight-up self-defense. “If you were to get grabbed in a playground, the elbow strikes and the knee strikes you’d use to defend yourself would get you disqualified in most tournaments,” Elrod says. “Any time you add rules, it’s no longer self-defense.” 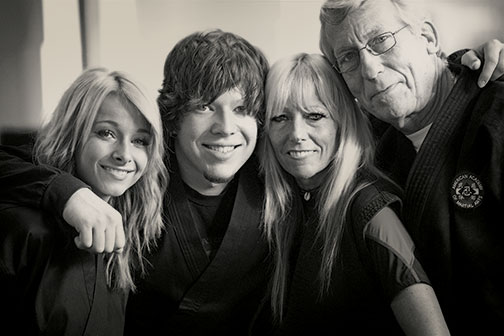 The Elrod family has extended its compassion to fostering dogs. Julie is an adoption coordinator for K-9 Lifesavers, an all-volunteer nonprofit rescue group based in Fredericksburg, Va. The group rescues lost and abandoned dogs from high-kill shelters in the south, and Elrod has fostered many badly abused dogs. “They aren’t normal, and they’ll never be normal,” she says. “But, we help make them feel happy and safe.” When she visits an adoption event and sees a dog cowering in a corner, she says, “I have trouble leaving it.” At any given time, the family may have up to 20 dogs in their home.

The academy sponsors fundraisers from yard sales to special martial arts events to support K-9 Lifesavers as well as such charities for children as Toys for Tots. Elrod has also authored several children’s books on topics ranging from math to understanding that it’s okay to be rude to a stranger in an unsafe situation.

Elrod says she’s surprised that children are still bullied over the way they dress clothing. “I have a little dragon kids class, and these five year olds are bullied because of their clothes,” she says. But helping those kids, she says, “is why I go home happy every night.” *