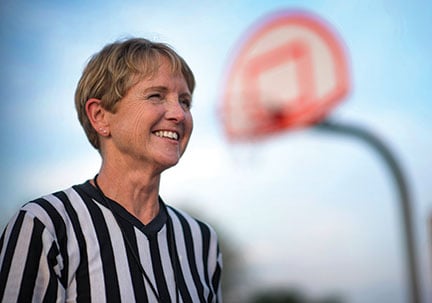 young boys’ games. It’s one small, but important, thing she does to make sure those young boys understand that an official can be a man or woman; it makes no difference.

“These young kids can see that it’s just the way it is,” she says. But it wasn’t always that way.

When Greene, 61, was a kid playing basketball, the world was a different place – especially when it came to playing sports.  “Girls are encouraged now; there are scholarships available and better coaching,” she says. “They have role models to emulate. They can watch some excellent women’s college basketball teams and say, ‘I want to do that.’”

Greene should know. For the last 19 years, the longtime sportswoman has spent her autumn Saturdays training young men and women how to preside over games, promote good conduct and know when to blow the whistle. Yes, she trains referees.

Erin Dabney, 16, joined the Western Howard County Youth Basketball Program referee training program last fall, looking for a fun part-time job. She had heard about the opportunity through a friend and wasn’t sure what to expect when she first entered the gym.

“I thought it might be boring, four hours on a Saturday night,” Dabney says, but she soon realized it would be anything but.

“The first few classes we jumped in, some of us scrimmaging, switching off from being players to being referees and making the calls,” she recalls. The instructor, Greene, was “great with the whole class, especially working with the girls and encouraging us,” says Dabney. “There were situations where I didn’t know what to do, and (Greene) always had a nice way of teaching me and correcting me.” The instructor, says Dabney, “was always helpful and open to questions.” 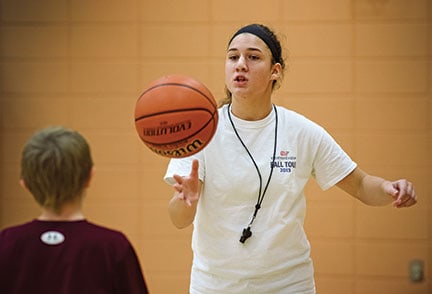 Greene makes it a point to encourage all the young people in the training program, but she pays particular attention to the girls. When she was growing up in the 1960s, girls were not encouraged as they are today to play sports.

Back then, the rules of basketball were different for girls: there were six players on each side, and only two, known as “rovers,” were allowed to run up and down the court. Each player could dribble only three times, then had to pass the ball. “I think the reason was they didn’t want girls to sweat, so we couldn’t move much,” she adds with a laugh.

By the time Greene got to ninth grade, girls were finally allowed to play by the boys’ rules, and then in 1972, when Greene was a senior in high school, the historic Title IX federal regulations were made law. Title IX stated, in part, that “No person in the United States shall, on the basis of sex, be excluded from participation in, be denied the benefits of, or be subjected to discrimination under any education program or activity receiving federal financial assistance.”

At the time, many high schools did not even offer girls’ sports. And women who had served as volunteer coaches went on strike. Greene’s own high school couldn’t field a basketball team that year, and so she was unable to play as a senior.

She did continue to play for fun in college and took a referee training course as a graduate student, which introduced her to a side of the game she has grown to deeply love.

The truth is, the job of the ref is not as easy as it looks.“Some people are just too timid, maybe they’re not mature enough yet, or maybe they just aren’t confident enough” to take command as a referee, Greene says. “It’s a tough situation, being a basketball official.” For one thing, it can be chaotic. “You’re in a tight area, with 10 people running around you, and you have to make split-second decisions,” she points out. “You have to be able to handle that.” 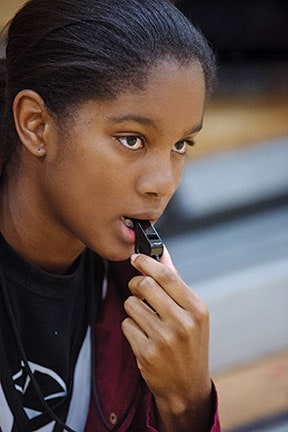 and can count on two hands the number of folks who could command the power of the whistle immediately. It’s intimidating, even for students who’ve played a lot of basketball and think they know the nuances of the game, she says. “One kid comes in on day one of class and says, ‘I know all the rules,’ but it turned out he just could not blow that whistle. Finally, one day he admits he didn’t actually know them all,” Greene said. “He was humbled by the experience and ended up learning a lot.”

The students of the Western Howard County Youth Basketball Program referee training program aren’t the only ones who have learned a lot over the years. Greene discovers something new every year, not just about the game of basketball, but also about life in general.

“I love seeing the game from a perspective other than the player. And seeing high school students take on the challenge of a very tough job and succeed at it, is amazing,” she says. “Learning to handle yourself in a tough situation, dealing with all the personalities, making split-second decisions in a fast-paced, emotionally charged situation, is great training for anything you might have to handle in the real world.”

Greene decided to start the referee training program in 1997 when she saw that her own children’s sports league suffered from a scarcity of refs. She knew that most adults may not have time to officiate, but teenagers looking to earn extra cash might be able to step in. She approached the recreation board and asked to start a training program for high school students who could work as referees for younger kids’ games. She and fellow coaches Rich Hawse and Dan Paugh have about 100 years of experience in refereeing among them.

He has stuck with the program for so many years because he likes leaving the court knowing he has “worked hard, called a great game and also ran several miles during the process.”

Tedrow says he admires Greene and the other volunteers who help make the referee program possible. “It’s a well-respected, organized league that allows youths to learn the game and compete in local sports.” 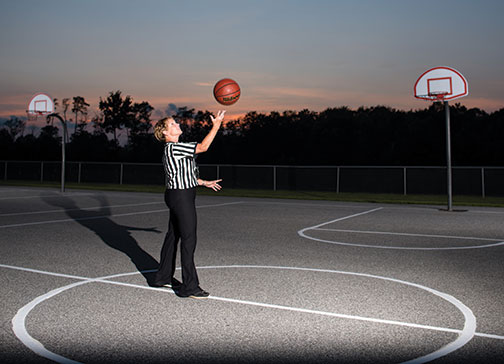 Sports have always been an important part of Greene’s life. Her closest friends became so on a field or on a court. She can’t walk through her own neighborhood without running into a parent of a child she once coached. She even met her husband through sports. “I was introduced to him at a hockey game through a woman I played rugby with,” she says.

Greene worked as a physical education teacher for nine years and has a deep love and respect for that profession. She now works in grants management for the Centers for Medicare and Medicaid Services.

As she gets older, Greene admits, she’s not sure how much longer she’ll be able to dedicate her autumn Saturdays to basketball officiating. She has grandchildren to think about and other priorities vying for her time. Even so, she says, “I’ll always love officiating, and it will always be part of my life.”

For now, she continues to pass her love of the game on to young people, teaching them that successful referees work with their personal strengths and don’t try to be something they are not. “If you tend to be more happy-go-lucky or laidback, then you should go with that, and it will work for you on the court. If you’re more assertive, use that to your advantage,” Greene says. “When you realize your strengths as a person and use them on the court, it makes everything a lot easier.” *