What We Can Learn from a Flowering Tree 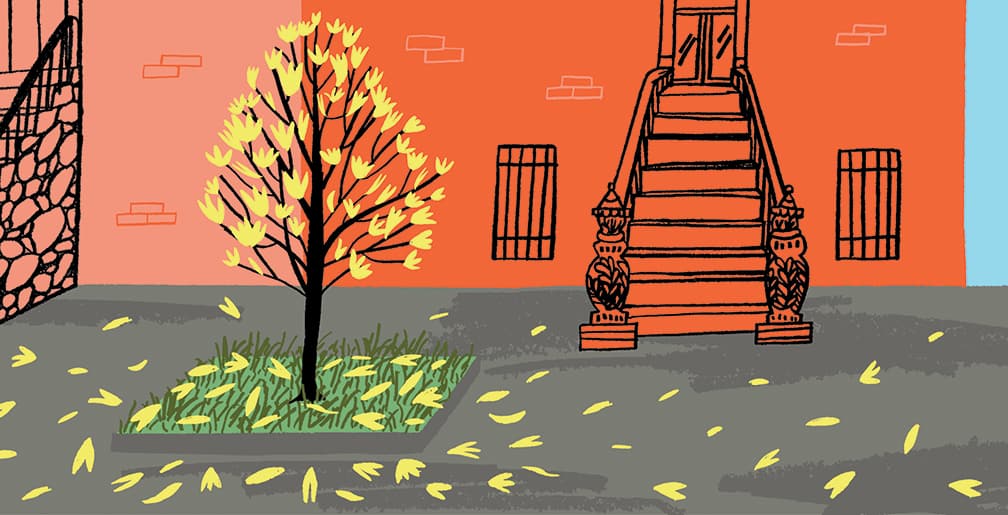 In 1998 my then-husband and I bought a run-down row house in Brooklyn, New York. In the midst of renovation I became pregnant. One of the most beautiful things I did during that time (aside from gestating an infant) was to plant a tree in the handkerchief garden in front of the house. It was a tiny butterfly magnolia sapling that promised fragrant yellow flowers and low maintenance. Three years later we moved, leaving our adolescent magnolia firmly rooted in the soil.

It’s been nearly 20 years since I planted it, but I still get reports from time to time from friends who find themselves strolling down 6th Avenue in spring. The tree, they tell me, is majestic. It’s everything I hoped it would be when I planted it. These reports always bring me to tears.

It’s not that I terribly miss the house, or Brooklyn, or even the marriage or the baby version of my son, who was so colicky that even the pediatrician was at a loss. But some days I’m heartsick about that tree.

My friend Gina has the same reaction when she thinks about the apricot tree she planted in her row house backyard in Baltimore, on what she calls “Apricot Alley,” back when she was still married and had little kids.

Insomuch as trees don’t belong to anyone any more than children belong to anyone, okay, sure, fine. But we are connected to them. Inevitably, at some point Gina and I start talking about fresh starts.

With our divorces and our new (smaller) homes, we got our fresh starts, and there are more fresh starts to come. Our children are at that age when, if I blink for too long, I’ll open my eyes to discover that one of them has gone off to college. This is not the case for only me and Gina—with so many divorced and middle-aged friends with teenagers, it seems that the world is awash in fresh starts.

But I have to wonder: Is there really such a thing as a “fresh start?” Because many things in my life feel less like a fresh start and more like déjà vu with slightly different circumstances.

My 16-year-old is fascinated with the idea of the multiverse: parallel universes, infinite alternate realities and so on. When I got divorced and moved into a new house, I looked at my yard and saw an opportunity to turn something ugly into pollinator gardens, cropland and mossy knolls. I’d done exactly that with my former house, but getting to do it again was the consolation prize for leaving behind the original. But here’s the thing. For two years now I’ve been pulling up crabgrass and cinquefoil and Bermuda grass and burdock taproots that always come back. Just like I did at the old house. The pace is glacial, and progress is elusive. So this feels like one of those cosmic patches in which almost everything I do is the same as it is in all the other cosmic patches, except for the one detail of where I’m doing it.

And new relationships—ever notice how the people change but the patterns remain? Are they fresh starts, or are they repeat performances with different players and different components?

I’d like to think that fresh starts, if not exactly fresh, are at least smarter. Maybe what we’re doing is not so much a burst of radical change, but more of a slow, steady program of incremental improvements. (I know, I know: Yawn.) As much as I’d like to think that there is a parallel universe where I dance for a living, another where I’m trekking the Himalayas and still another in which I live in Barcelona and speak Spanish fluently, it’s much more likely that in every damn one of these alternate uni¬verses I am using curse words at burdock.

This summer, to my delight, I discovered that my new house has a sour cherry tree planted up against a fence. Last summer I missed it entirely—the flowering and the fruiting. I’m not as ditzy as I sound: The fool who planted it years ago put it in a very stupid place. The discovery was one of those rare, lovely surprises that came out of nowhere. I forced my 14-year-old daughter to harvest the sour cherries, which she did without too much com¬plaint—that was in itself a lovely surprise. I pitted the cherries, froze them, and then, one day, made a sour cherry crumble that was pretty good.

Of course, compulsive garden-improver that I am, I want to relocate the tree to someplace less dumb. But if I do, it will surely die. Maybe somewhere in the multiverse, the person who planted the tree thought twice and placed it in the middle of the yard where it absorbs all the sunshine it needs and graces the neighborhood with its beautiful, fragrant blooms.

Which sounds like my butterfly magnolia tree in Brooklyn. Which I still miss like crazy and can’t really figure out why. Gina knows. “You were pregnant there,” she says. “You were a young mother there.”

I’ll make the sour cherry crumble again next year, I hope, though with a modest improvement. I’ll add a cup of blueberries to make it more sweet.*