WHEN HER YOUNG DAUGHTER WAS RECOVERING FROM SURGERY, MICHELLE KUPIEC ENCOURAGED HER TO BAKE. WHO KNEW THE HOBBY WOULD BECOME A FAMILY BUSINESS?

The Kupiecs are proof of the value of the adage “when life gives you lemons, make lemonade.” Or in their case, lemon buttercream, lemon meringue and raspberry lemonade. Cupcakes, that is. 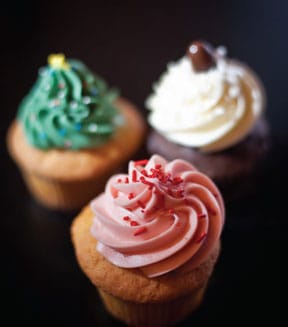 Mom Michelle and teen daughter Amanda are the main forces behind Kupcakes & Co., a family cupcake business that grew out of a difficult time in their lives. Just four years ago, Amanda Kupiec was an eighth-grader struggling with complicated medical problems, and her mother was struggling to get her child to eat.

Learning to bake with her mother helped Amanda regain her appetite, and now they share their passion with customers at their gourmet “cupcakery” in Elkridge.

Step through the doors of the unassuming storefront into a world of delectable cupcake flavors, such as salted caramel, peanut butter and jelly, chocolate peanut butter cup and even pancakes and bacon (Maple cake with bacon – does this count as a breakfast food?).

Amanda, a petite, athletic 17-year-old, works in the kitchen when she’s not at Howard High School or playing sports. Looking at her today, one would never guess the path to her baking career began in a hospital bed. 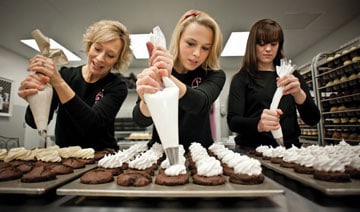 When she was in middle school, she underwent spinal fusion surgery to correct scoliosis, a curvature of the spine. Doctors inserted two 20-inch titanium rods, and 18 screws in her spine. She woke up from the surgery three inches taller – and permanently unable to bend her back the way others can.

For weeks after the surgery, Amanda lay in the hospital bed her parents set up at home, uncomfortable and without an appetite.

Her orthopedic surgeon suggested she watch the Food Network, hoping it would make her hungry.

So she did, consuming the “Ace of Cakes,” “Cake Boss,” and other cooking shows. “She became obsessed with learning to bake. She wanted to come up with her own recipes,” recalls Michelle, 45.

With her mother and fraternal twin sister, Allison, to cheer her on, Amanda began creating her own recipes for rich cupcakes with hand-piped buttercream frosting. 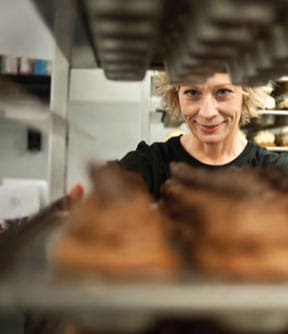 Amanda inherits her love of baking from her mother. Although she never planned to make it her career, Michelle incorporated baking exercises into what she describes as her first love, teaching young children.

When Amanda was in first grade, however, the little girl began suffering repeated bouts of pneumonia. “She was in and out of Howard County, Children’s and Johns Hopkins hospitals for four years,” her mother says. She even spent one Christmas in the hospital, tethered to an oxygen mask as she opened her favorite gift, a metal detector. “The doctors were baffled: why did this kid keep getting pneumonia?” Michelle says.

With Amanda sick so often, Michelle eventually resigned her teaching job to care for her. Amanda stayed cheerful despite a childhood that included oxygen masks and intravenous tubes. By middle school, her respiratory infections seemed to be behind her, according to her mother.

But then Amanda learned she had scoliosis, which was followed by surgery and physical therapy. And, of course, cupcakes.

When she entered high school, Amanda focused on playing volleyball (and later track), but she continued to bake for fun. “There’s so much creativity involved, ” says Amanda, who plans to attend an out-of-state culinary school in the fall.

She often brought cupcakes for her teammates. Before long, their mothers were placing cupcake orders for showers and birthdays. One day a mom who had sampled Amanda’s wares put Michelle in touch with someone who wanted to place large orders of cupcakes regularly. Suddenly, a hobby was a business.

“I was a stay-at-home mom with busy teens, and I needed to turn this into a business, ” Michelle recalled. She needed licenses, permits and most of all a place to bake. She found a commercial kitchen to rent in Baltimore, where she initially worked on her own (with help from the twins when they weren’t in school) to bake and hand-decorate hundreds of cupcakes daily.

Soon she had to hire help, and last year, moved the business into its own space on Meadowridge Center Drive. She has 15 part-time and full-time employees, many of them once stay-at-home moms like she used to be. The company also bakes for several local restaurants, corporate events and weddings.

The store looks like an old-fashioned ice cream parlor, with its pink walls and décor. Cupcakes, baked fresh and hand-decorated daily, fill trays along the wall. A single cupcake is $2.50, but multiples are discounted. Cupcakes left over at the end of the day are donated to food banks and shelters, Michelle says.

Although it has a staff, Kupcakes & Co. is still a family affair. Sister Allison works the cash register and helps decorate cupcakes on weekends and during the summer. Father Bill, 47, tackles website and equipment issues when he’s not at his job as an information technology manager. Grandmothers Margie Kupiec and Marge Cameron also pitch in with everything from accounting to human resources help.

Next fall will bring some changes, after the twins graduate from high school and start college. But for now, Michelle is enjoying having her daughters working with her. “When we’re all here, it’s magic.”