WHILE SOME WOMEN EMBRACE GUNS, OTHERS THINK ARMS ARE FOR HUGGING 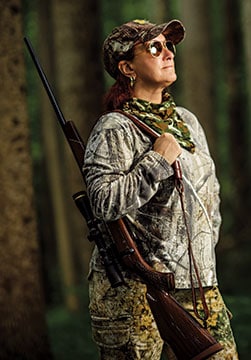 containing a Lady Smith pistol as a wedding gift 16 years ago, she was sur¬prised. So much so, in fact, that she placed it on a shelf and forgot about it for the next three years. Curiosity eventually got the better of her, however, and she learned to use, appreciate and enjoy the firearm. Today White co-owns and instructs at IOTA Firearms and Security Training in Marriottsville.

Like White, 45-year Ellicott City resident Susan Hennick never fired a gun until her firearms instructor fiancé introduced her to one four years ago. Today her favorite way to “get away from it all” is to head to the range for a session of target practice.

Buffy Beaudoin-Schwartz, a 49-year-old philanthropy advisor from Ellicott City, looks at guns much differently. She grew up in Newtown, Connecticut, and attended Sandy Hook Elementary, where 20 children and six adults were fatally shot in 2012. Beaudoin-Schwartz, a founding member of Howard County Women Against Gun Violence, is committed to seeing change in the “senseless gun violence we continue to witness.”

Howard County’s diversity is played out perhaps nowhere more than when it comes to women and their relationships with firearms. From activists to hunters and target shooters, women here look at guns through a wide variety of lenses. But they are educated, informed and passionate lenses.

GALS AND GUNS
Hard numbers on female gun ownership are difficult to come by, but the National Sporting Goods Association reports a 51 percent increase in female target shooters between 2001 and 2011, and a 41 percent increase in female hunters during the same period. White says she sees more women coming through her firearm training programs these days. “Many women come in to learn to use a gun for self-defense,” she says. “Our students are still predominately male, but I really enjoy working with women.” 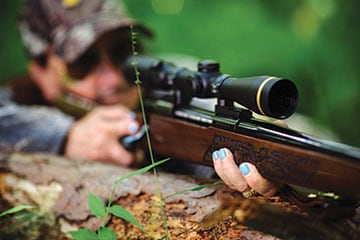 IOTA offers a wide range of classes, from basic shooting and personal protection to a host of “women and families” courses. Regardless of which class she is leading, White puts safety and responsibility front and center. “I convey in the class¬room that you must have a strong moral compass if you are going to own a firearm,” she says. “If you are getting a gun for self-defense, the last thing you want to do is pull the trigger. Honestly.”

Hennick is also a proponent of education and safety, and as a parent to two teens, has had to navigate gun ownership and parenting under the same roof. “We keep our firearms locked and stored away at all times,” she says. “We also make sure our children are educated and understand firearms. We have never let them watch violent video games because we believe they wouldn’t understand the reality of shooting someone.”

White’s involvement in firearms extends beyond instruction and into the law (See sidebar.) and also history. White and her husband, both African-Americans, formed the 10th Calvary Gun Club (named after the Civil War’s Buffalo Soldiers) a decade ago with the mission of teaching youth about the role of African-Americans in past wars.

“There’s a history of responsibility and honor with African- Americans and guns,” she says. “Educating young people about this is one way to help them learn to treat firearms responsibly.” 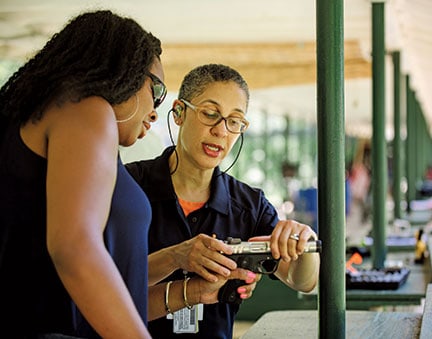 The group meets monthly and is a family oriented social club, says White. “It’s a matter of exposing people to a history that’s not taught in school,” she explains. “We think that by sharing the past we can inspire youth to contribute in the future.”

Both White and Hennick support conversations about responsible ownership. For the most part, Hennick finds fellow county residents open-minded about her family’s gun culture. “Sometimes you’ll get a little hesitation when you tell someone what we do,” she admits. “But usually we just touch on it and move on.”

Cherington grew up in Vermont, surrounded by hunting, but didn’t pick up a gun herself until her husband of 22 years took her on their first date – to the Patapsco target range in Marriottsville. After a few years, she expanded her hobby to include hunting and not long after, began experimenting in the kitchen with the game she bagged. Today, she says, she sources 98 percent of her family’s protein from hunting. “I only hunt what I’ll eat,” she explains.

Cherington spends countless hours poring over traditional cookbooks and playing in the kitchen to develop her own versions of recipes. She shares many of them on her website and with “Maryland Hunting Quarterly,” and may someday produce her own cookbook. “It’s pretty empowering to go out and hunt your own food,” she says. “My goal is to take my hunting and cooking to a new level.”
– A.L.

SEEKING SOLUTIONS
The Howard County Women Against Gun Violence would like to dig deeper into the conversation.

Founded earlier this year as an outgrowth of the Junior Women’s Club of Ellicott City, the group has become an open forum on the topic of reducing gun violence as well as a place of action.

Today some 300 women have joined the group. Recent activity has included marches on Washington following the Orlando shooting, establishing tenets of the Sandy Hook Promise (See sidebar.) in county schools and serving as a safe zone for women looking to discuss ways to curb gun violence. “It provided me with a sense of ‘you are not alone’ among women in our community,” says 46-year-old attorney Jenn Cavey. “It’s been a great place to learn and share opportunities to take action.”

Members of the group vary in their stances on gun ownership and reasons for joining, but all share the goal of ending gun violence both in Howard County and in the United States, says Beaudoin-Schwartz. “When women are motivated, great things happen,” she adds. “The group is a small step to help make a difference.”

After two years in the U.K., member Karen Herren, 44, who returned to the U.S. last year, found the group helped her feel she was making a difference. “I really hoped that the United States would deal with the issue of gun violence when we were away, but obviously that did not happen,” she says. “More people are coming to the realization that things need to change and that staying silent is not
an option.”

The group is still getting its bearings and determining where it is headed. Its members don’t want to reinvent the wheel when there are many other women’s groups with similar goals. But they remain dedicated to making a difference one way or another. “This is not something that will be an overnight change,” admits Beaudoin-Schwartz. “But my hope is that all sides can come together and discuss common sense measures to address gun violence in our society.” *

Buffy Beaudoin-Schwartz both grew up in Newtown, Connecticut, and attended Sandy Hook 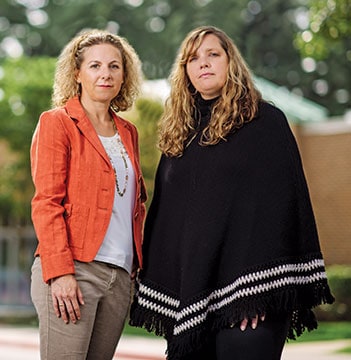 Elementary, site of one of the nation’s worst mass shootings. Her parents still live in the town and the shooting profoundly affected her. “Newtown is one of my favorite places on earth,” she says. “December 14, 2012, was one of the worst days of my life. I watched in horror as we learned that 26 human beings were massacred in my hometown. Newtown is now a euphemism for mass murder.”

Unwilling to stand by and not take any steps to prevent something similar from happening again, Beaudoin-Schwartz has raised thousands of dollars for the town, helped form the Howard County Women Against Gun Violence group and also became a Sandy Hook Promise leader. “Sandy Hook Promise is a national nonprofit organization founded and led by several family members whose loved ones were killed at Sandy Hook Elementary School,” she explains. “By uniting people of all beliefs and backgrounds who value the protection of children to take meaningful actions in their homes and communities. Efforts include delivering and advocating for mental health, early intervention programs, gun safety storage practices and sensible state and federal policy to help stop the tragic loss of life.”

Here in Howard County, Beaudoin- Schwartz has helped implement a Sandy Hook Promise program called Start with Hello at Northfield Elementary School. “Start with Hello is designed to bring attention to the growing epidemic of social isolation in our schools and communities and to empower kids to create a culture of inclusion and connectedness within their schools,” she explains. “Northfield had a big kickoff in February and during monthly lunches, students are encouraged to sit and engage in conversations with someone new, especially classmates who may be socially isolated.”

Plans for the future include the installation of a “buddy bench” on the Northfield playground, a space designed specifically for students who feel lonely or isolated to sit, indicating they are looking for company. – A.L.

MS. WHITE GOES TO ANNAPOLIS
What happens when a Maryland citizen applies for a gun permit and is turned down? He or she can appeal the ruling (handed down by the state police) to the Governor’s Handgun Permit Review Board. The board can sustain, modify or reverse the original decision.

Since May 2015, Courtney White, co-owner and firearm safety instructor at the IOTA Group, based in Marriottsville, has been one of two women serving on the board. White and the board members meet twice a month to discuss the cases in front of them. “We don’t rubber stamp people,” she explains. “We interview them to see what their reason for carrying is and evaluate if they need further training. At the end of the day, it’s our job to uphold the permitting process as it pertains to Maryland law.”

Each member serves on the board for a three-year term and must be approved via a Senate hearing.
In order to own a gun in Maryland, residents must first obtain a handgun qualification license. To apply, applicants must complete a fingerprint-based background check. Within three years prior to the submission of an application, the applicant must demonstrate satisfactory completion of a firearms safety training course.
– A.L.