Any way you look at it, women are still in the minority in elected office nationwide and statewide, even in modern progressive Howard County.

“Research shows that women need to be asked about seven times to run before they actually consider doing it,” says Maureen Evans Arthurs, running for Democratic Central Committee. “Though that statistic still stands, I believe 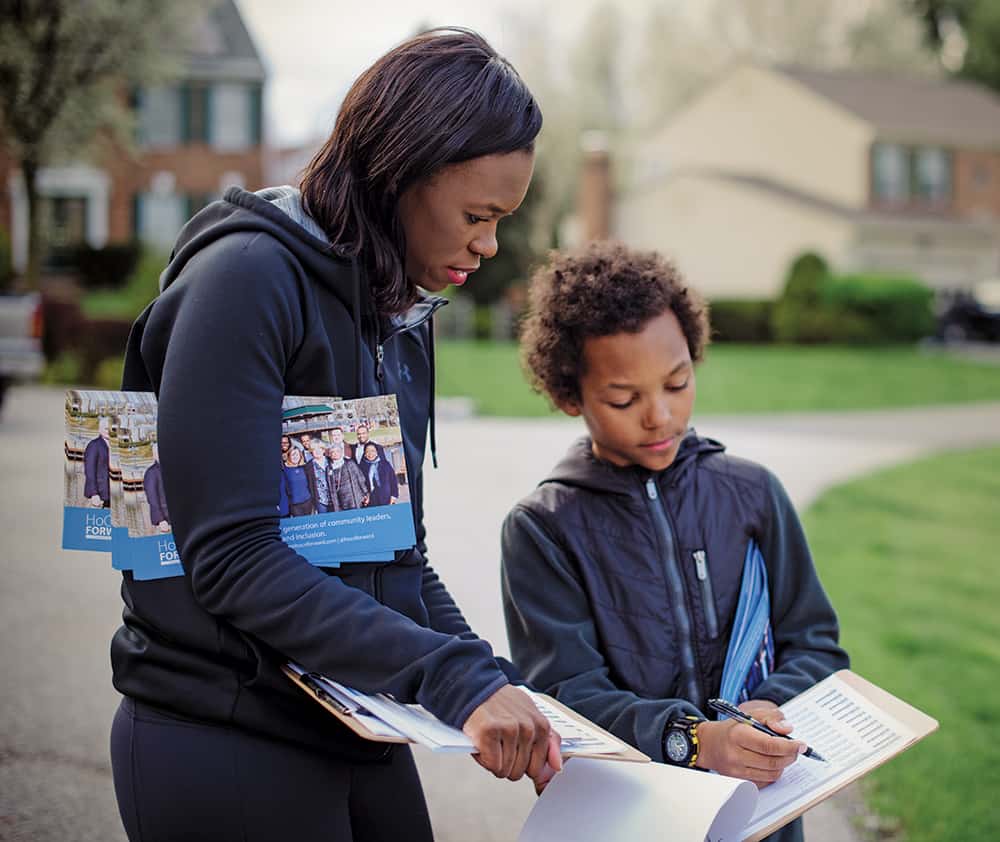 that 2018 will be the year of women. Nationwide, women are turning out in droves to file to run and, locally, we have more than 20 women on the ballot.”

Nationwide, 472 women are running for U.S. House of Representatives, 57 are running for Senate, and 78 for governor. According to an April article in The New Yorker, the collective women running for office across the country includes more racial and ethnic diversity than ever before, as well as more veterans. They are not shying away from their identities as mothers.

Howard County historically had been a county with good representation by women in government, but the 2016 elections reduced the number of female officeholders statewide.

This year, Maryland ranks tenth in the U.S. for percentage of women in the state legislature (31.9 percent), according to the Center for American Women and Politics at Rutgers University. Arizona and Vermont are tied for No. 1, with 40 percent. No state even comes close to 50.8 percent, which is the nation¬ wide population of females, according to the 2010 U.S. Census.
“It’s kind of shocking,” says council candidate Christiana Rigby of the disproportionately low number of women currently in elected office. More women in office will help to normalize the idea, she says.

Arthurs ran for school board unsuccess
fully, then realized after taking the Emerge Maryland program to prepare Democratic women to run for office that she hadn’t known all she needed to run a campaign.|
She and Rigby are among dozens of women statewide who have taken the seven-month Emerge course. Participants learn that Central Committee is a way to quickly learn the lay of the land in government, as well as contribute to shaping the party’s platform and select replacements to fill a vacant office—which happens often enough that it’s an important role.

Del. Pamela Queen says her path to becoming the first African-American woman representing Montgomery County in the Maryland General Assembly started with taking the Emerge course, then being selected to Montgomery County Democratic Central Committee. From there, she was selected in 2016 to fill the seat vacated by Del. Craig Zucker. Queen is currently running to keep the seat in the fall 2018 election.

“The central committees have been instru¬mental in getting minorities into elected office,” Queen says. “And Emerge has been helpful especially for providing the skills needed to run for office, the experience and the mentoring [that we might not have had access to].”

Alicia Altamirano, an immigration and family lawyer, is a first-time candidate running for Democratic Central Committee. “I feel like it’s where I can contribute the most. There has been no Hispanic representation in Howard County government in the last 30 years. But there are a lot of us, and we vote,” says Altamirano.

Candace Dodson-Reed is running for re-election to the Democratic Central Committee in Howard County, and it means even more to her this year.
“I am inspired to run again for my daughter—who can vote for the first time this year—and to continue to advocate for and support candidates who stand up for values of inclusion, equity and opportunity for all.”

Natalie Ziegler, who manages a family farm and owns a small manufacturing company, attended a two-day program last fall in political and leadership training, offered by the Maryland Farm Bureau, of which she is a member. She is running for office for the first time as a Democrat for state delegate in District 9A.

Maryland has ranked as high as third in the U.S. for percentage of women elected officials, but slipped to as low as 16 a decade ago, which prompted a group of local women to start a local chapter of Emerge America, an organization devoted to increasing the number of female Democratic leaders, currently in 17 states.

Emerge Maryland was launched in 2012, according to Diane Fink, its executive director. Arthurs, Hester, Rigby, Jung, Dodson-Reed and several other Democratic women running for the first or second time say Emerge Maryland has helped them with their campaigns.

The core of the program is a seven-month, 75-hour course in which participants meet once or twice a month, usually for a full day on a Saturday.
Fink says the women who apply to the program are devoted. One woman showed up for an interview and was, unbeknownst to Fink, already in early labor. She gave birth that night and was ready for classes once they started. And Rigby took the Emerge course while pregnant, gave birth to her son, Arlo, and brought the newborn with her to the very next class.