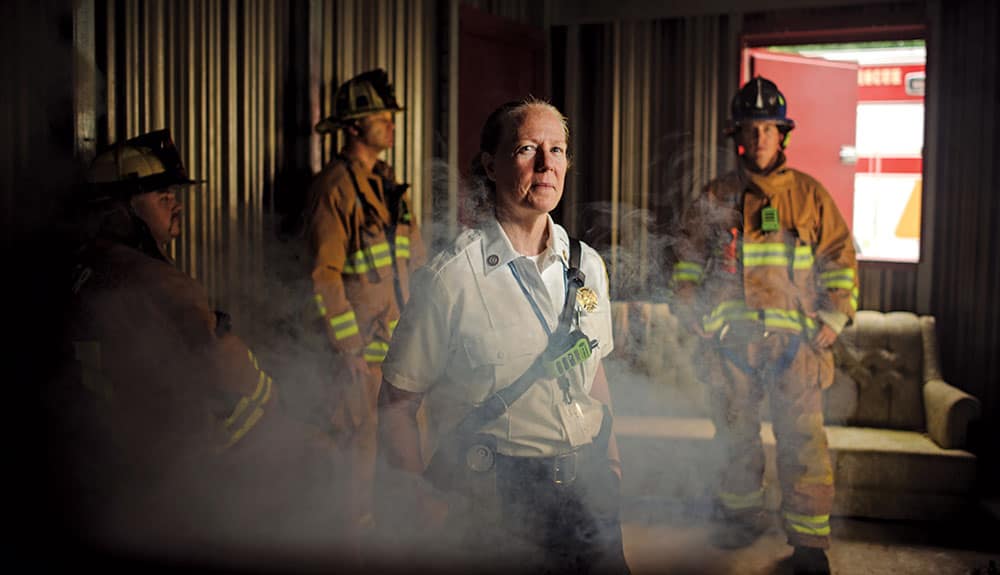 Joanne Rund, who joined the Howard County Department of Fire and Rescue Services in 1987, was the department’s first female assistant chief. She has held a leadership position in four of the department’s six bureaus, and in 2013, she was appointed to head the department’s nascent Bureau of Occupational Safety and Health.

Q: What turned you on to being a firefighter?

Little girls in our generation usually wanted to be nurses and teachers. I started in Carroll County as a volunteer EMT and was always waiting for the firefighters to bring out the person. I was taking care of the people once we get them out, but I wasn’t doing all of the exciting firefighting stuff.

Q: In what way was it exciting to you?

The firefighters are doing the rescue. I kind of wanted to figure out what that was like. Right around the time I finished taking my firefighter and my rescue classes for the volunteer position, Howard County was hiring. Some of the guys I was doing rescue with said, ‘You should try to be a career firefighter,’ and I was like, ‘yeah, right, I’d never do that.’ I was a hairstylist then.

Q: Holy crap. Tell me about that.

In high school we had technical classes; I did cosmetology. I was thoroughly convinced I wanted to do hair for a living. I thought it was a glamorous, wonderful career, I was interested in all that kind of artsy stuff—interior design, you name it. Then I became a volunteer at the station. And all the time I was cutting people’s hair I was telling them about the calls I was on the night before. My manager said, you know you might try being a firefighter, it sounds like you’re so much more excited about that. I guess because I wasn’t talking about hairstyles and color.

Q: Tell me about some exciting experiences in the past; pretend you’re cutting my hair.

I had a building collapse on me while I was in it. A fire was being fed by gas, and that gas fire really took off and destroyed the back side of the building. While I was in it. That was the turning point in my career to become interested in safety. There should never be a fire where we don’t know enough about the condition of the building to get them out.

First of all, hopefully we wouldn’t be in that building when it collapsed. We have safety officers who are trained to keep an eye on the building. They all have construction backgrounds so they know what a building looks like  under deteriorating conditions and can tell if a wall is starting to look a little out of sync. The safety officers who go on incidents like that are the second set of eyes.

Q: In urban areas, sometimes lower income families have conditions that can cause fires. How does a suburban area like Howard County compare?

We have a lot of nice low income buildings here, and they’re all sprinklered. We actually have more problems with the larger homes, that aren’t required to have sprinklers in place—a house of 8,000 square feet can have a lot of fire in it. That causes a huge health and safety issue when it comes to homeowners, especially if they don’t have smoke detectors. Our strategy is designed for a 1,200-1,800-square-foot house. An 8,000-square-foot house requires a different tactical approach. On top of that, trying to get water to put out that type of a fire is a challenge.

Q: Do you deal with the opioid crisis?

Our firefighters are really impacted by the opioid crisis right now. They recently ran a call where it was the mom and the dad and a toddler. The parents had both overdosed and the toddler was sitting there with them.

Q: Have you been on difficult calls?

The one I’ll never forget was early in my career. My son was 18 months old, and I ran a call just down the street from our station. The little boy’s name was Christopher—that was my son’s name. He was also 18 months old. I remember walking into the house. I remember seeing the little boy laying on the floor. I remember the dad telling me the boy had pulled a vacuum cleaner tube down the steps and it had fallen down on him and he had been unconscious ever since. Who was I to question whether that was accurate? We took the boy into the medic unit and he was going downhill. I was getting ready to start CPR, so I called for the dad to come in the back of the ambulance—he was sitting up front. I told him, ‘I need you to come back here and talk to him, I’m losing him.’  I asked him to tell me what Christopher’s favorite toy was, his favorite brother or sister. And the father couldn’t think of anything favorite at all. He didn’t react. I thought, maybe this is just his reaction to shock, who am I to judge? We got to Hopkins, and it wasn’t two minutes, and the nurses working with him discovered bruising. They immediately said, ‘Where’s the parent?’ They called security. It was a child abuse case and the little boy ended up dying. I just lost it. I remember that call like it was yesterday•my son is now 29 years old. I remember exactly where it was.

We all love kids; whenever a child is impacted it hits us pretty hard. We watch our calls to see what kind of calls the firefighters are going out on and if it looks like there’s a child involved … I don’t want to sound crass, but when you think of someone who is  80 or 90 who went into cardiac arrest it’s easier to handle than a 3-year-old who went into cardiac arrest …

We reach out to the person who went out on the call to make sure they’re OK. Our busiest stations are running 35 calls a day. We are seeing people on the worst day of their life. If you’re out there doing that for 10-15 years, it takes a toll. You have dreams about stuff you’ve seen.

Q: What’s the crossover with EMT and firefighters?

So many times when it’s a medical emergency, you’ll see a fire truck pull up. We don’t always know what we’re in for. For example, this is going to sound funny, but a person who has fallen off their toilet and gotten wedged between the bathtub and the toilet. You’re not only going to get an ambulance, you’re going to get a ladder truck and a fire engine. Because we don’t know if you’re going to have to cut someone out or disassemble the toilet.

Q: You grew up wanting to do hair and interior design. What do you tell girls about careers in the fire department?

Middle school is a good age. I’d get calls from schools and they’d say they want a female firefighter on career day. A lot of the girls who are sports oriented will look at the fire department as a possible career. Others, I’m not sure if it’s their upbringing, but it never would have crossed their minds. I tell the girls, ‘Don’t be closed minded about what you’re going to do for the rest of your life.’ I always tell them, at least explore it; figure out if it’s something that’s an option for you

Q: How do you pitch it to the girls?

Oh my gosh, it’s so rewarding. We’re always trying to diversify the fire department. What I want to see is when you look at us getting off the fire engine, I want that person who is having the worse day of their life to see someone they can identify with.