Jennifer Kiehl manages a day at Lupa with ease 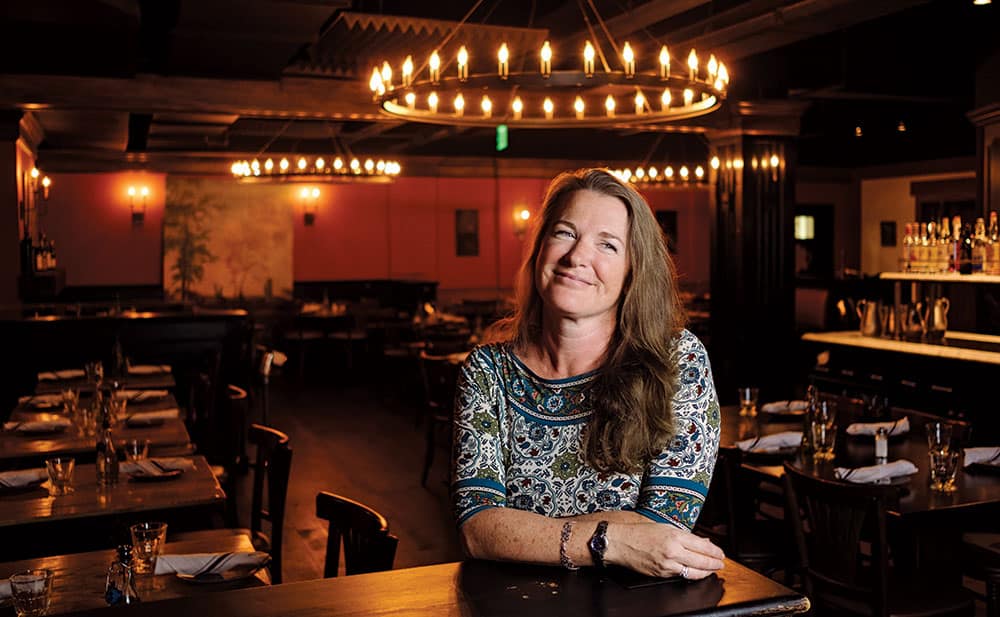 By the time the first guests are seated for lunch at Lupa, Jennifer Kiehl will already have worked harder than many people work all day.

Kiehl does double-duty, managing day-to-day business and handling private dining events at the Columbia Town Center restaurant and its adjacent gelateria. That means that every minute she’s not interacting with a guest, checking on something in the kitchen, or helping a busy member of the wait staff, her mind is on an upcoming dinner or charity event.

Lupa, which means she-wolf in Italian, is the latest restaurant from Foreman Wolf, the Baltimore-based company behind powerhouse dining destinations like Charleston and Cinghiale. It’s in the lakeside spot formerly occupied by the group’s French bistro, Petit Louis. Kiehl started her career with Foreman Wolf in 2002 as a server at Charleston. There, she worked her way up to maître ‘d. After a brief move to Pennsylvania and stint as an insurance agent, she rejoined the Foreman Wolf team and moved into her management role at Lupa when it opened earlier this year.

We tagged along with Kiehl during lunch service on a warm, sunny Thursday, observing the quiet confidence she maintains while overseeing one of the busiest new dining rooms in Howard County.

Lupa doesn’t open for business until 11 a.m. and the restaurant is quiet in the hour before lunch begins. But that doesn’t mean Kiehl lounges around. Sitting at a table in the front window, she bounces between her laptop, where she’s checking private dining requests, and a stack of cash she’s counting before placing it in the register.

“It’s a lot like getting ready to put on a play,” she says. “A lot of behind-the-scenes things have to happen to have the stage set.”

Kiehl’s stage is a pretty one. Outside, tables sit on a small front patio, bordered by herb-stuffed planters. Indoors, the restaurant is all Old World charm: dark wood, dramatic lighting, traditional paintings and a long bar perfect for lingering over a glass of wine (or two). In a separate room behind the bar, Lupa’s gelateria is casual and bright; the glass case housing the fresh gelato is a focal point.

Over the next five minutes, she signs for a shipment, walking the delivery man back to the kitchen, checks on the progress of a trainee in the gelateria and lets the dining room staff know that a waiter has called in sick and a different staff member has picked up his shift.

She confides that she’s getting over an illness and is on antibiotics that are slowing her down. You’d never know it.

As the phone rings, Kiehl slips on her glasses and taps on the computer sitting on the hostess stand. The caller wants to make a reservation for nine people for lunch; the group includes children with food allergies.

She logs the information into the restaurant’s software, a sophisticated system that allows Lupa to manage staffing, seating and reservations, and has a section for notes about customer preferences. She makes a note to talk with the kitchen about the table’s food restrictions.

The servers gather around the bar, fueling up for the day ahead with a staff meal of wings and eggplant parmigiana.

She gives the employees a quick pep talk, letting them know what to expect for the day (lots of guests hoping to sit outside) and which menu items are and are not available (including a new brioche that she loves).

This talk is quicker than the one that happens before dinner service, which involves more detail about wine, often including tastings of new wines offered by the glass and a discussion of the grapes. Today’s servers are seasoned; they know the menu and know what to expect for the day.

In the 20 minutes remaining before the doors open, Kiehl checks in on the gelateria, the airy coffee and gelato shop adjacent to the dining room, where freshly baked pastries and breads are being transferred to a display case, finishes counting money for the register, flips through a stack of just-delivered mail, glances at the computer screen to review the table layout for the day and completes a quick walk-through of the restaurant, making sure every table is outfitted with salt and oil.

She spots a few things that need to be addressed—the bar needs bar mats, a few stray dishes sit in a corner, last night’s menus are on top of the pile at the hostess stand. She fixes some of the issues herself, while calling on servers to help with others.

Five minutes before opening, Kiehl pulls the restaurant’s heavy front doors wide, propping them open with bricks. After placing a menu sign outside—along with two bowls of water for dogs—she eyes the outdoor tables and plucks an errant weed from one of the planters that separate the patio from the sidewalk. 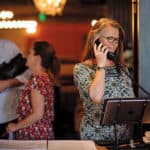 The clock turns and the restaurant is officially open for business, but remains empty. Over the next 20 minutes, the phone rings repeatedly, with people calling to secure tables. The large party from earlier calls to make a change—instead of nine, they will be four. A second manager, Isaac Kukulies, arrives; Kiehl briefs him on the morning’s happenings.

Though no customers have walked through the door, the air is crackling with anticipation. Kiehl and her staff are ready. 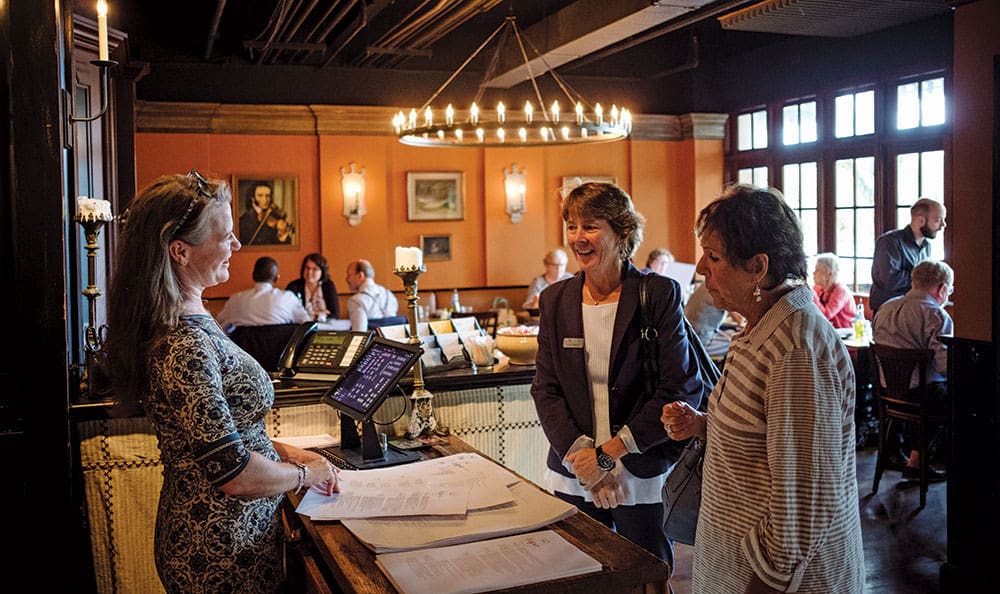 Jennifer Kiehl, house manager of Lupa restaurant in Columbia, preps tables for diners and greets them as they come in during a recent lunch rush.

At Lupa during lunchtime, everything happens all at once. The first guests arrive and are seated, and for the next hour and a half, Kiehl and the rest of the staff are constantly in motion. The phone continues to ring, guests arrive, food is shuttled in and out of the kitchen by both servers and managers.

Lupa’s pizzas are a hot ticket during lunch; they come out of the kitchen with crispy crust and bubbling cheese (the mozzarella is made in-house). But they’re just part of the mix: bowls of pasta tossed with meat or vegetables or more substantial entrees, like leg of lamb and pan-seared bronzino, are delivered to other tables.

Kiehl circulates smoothly throughout the restaurant hopping behind the hostess stand when necessary, visiting tables to say hello (greeting regular customers by name and discussing an upcoming charity event with a few), slicing bread for a table, checking the kitchen for food, opening a bottle of rosé, grabbing checks off tables and running credit cards.

She and staff members check in with each other frequently and casually, making sure that nothing falls through the cracks. They move and speak with the confidence of people who have developed trust for one another.

With most tables cleared, Kiehl’s pace slows. The lunch rush is over, though her day is only at its midpoint.

She’ll go home for a while in between lunch and dinner; Kiehl is a single mother and her schedule allows time with her son in the afternoon. Then she heads back to the restaurant for dinner—and the real rush. The bar will be packed, the tables will be filled, and Jennifer Kiehl will handle the crowd with grace.

The Women of Foreman Wolf 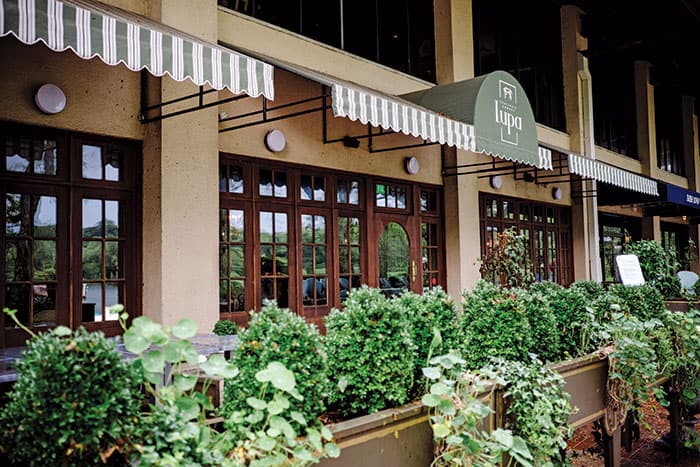 Lupa isn’t the only Foreman Wolf restaurant with women in management positions. In addition to Lupa, Petit Louis (Baltimore), Cinghiale, Bar Vasquez and Johnny’s are all managed by women, as are Foreman Wolf’s two wine shops, Bin 201 and Bin 604.

The company has a strong female presence in the kitchen, too. The company’s two pastry chefs are both women and, of course, Cindy Wolf is the executive chef at Charleston and a co-owner of the restaurant group.

For Wolf’s business partner, Tony Foreman, hiring women in leadership positions is a no-brainer. Women have an advantage in restaurant work due to their ability to juggle multiple tasks, he says. Traditionally, women have often been expected to take care of the home and children, while often holding down a job. “That is a whole lot more complicated life than a lot of men have,” Foreman points out. “It’s no surprise to me that so many of our female leaders go above and beyond to make sure our diners are happy.”