On a Wednesday evening in April, an entrepreneurial urgency seems to fill the room as about 20 young women tackle challenges that come with a start-up business—like what to include in an annual shareholders’ report, or the most efficient way to distribute pre-ordered products to customers. 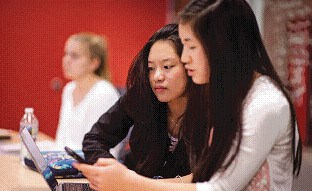 Dressed in slacks and blazers, they sit in groups at BTS Software Solutions in Columbia, typing information into spread¬sheets or jotting down sales numbers on a whiteboard.

Promptly at 6:30, members of the start-up company Boundless gather in a conference room and Ashley Martin calls a weekly huddle to order, hearing reports from the sales, finance, marketing and supply chain departments. Martin is the CEO of Boundless. She’s also an 18-year-old graduating senior at Atholton High School.

“When I first read the flyer online, I almost didn’t believe it,” recalls Martin of learning about Rising Women, an after-school entrepreneurship program for female high school students in Howard County. “I had to question whether we would start an actual company.”

As Martin quickly found out, it was very real. Run by Junior Achievement of Central Maryland (JA) , a national nonprofit dedicated to teaching young people skills for economic success, the 13-week curriculum offers young women a crash course in entrepreneurship—from conceptualizing and establishing a company to fundraising, sales, production, and, finally, liquidation. “It was so unique, even among all of the amazing opportunities in Howard County, says Martin, who has participated in the program’s fall 2016 and spring 2017 semesters. “I’m going to be studying business in college, and I came into it trying to find any real-world experience I could get.” 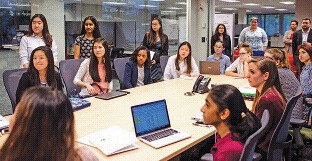 Now beginning its fifth cycle, the Rising Women program was established in the fall of 2015 through a grant from The Women’s Giving Circle, a fund of the Community Foundation of Howard County. Each semester, about 20 young women from a variety of Howard County high schools are accepted into the program after undergoing a rigor¬ous application process.

“The curriculum itself is a capstone of Junior Achievement; it’s been around for decades,” says Hina Naseem, Rising Women coordinator and regional director for Junior Achievement (JA), a program that teaches financial literacy, decision making and entrepreneurship to students in grades k-12. The idea for a female-focused program came after JA observed a gender disparity in Company Program, its in-school co-ed curriculum. “We saw that when we go into the business classrooms it’s usually boys, and the few girls there aren’t taking the leadership roles,” Naseem explains. Rising Women establishes a safe environment where young women can develop business skills and feel comfortable taking risks and speaking their minds. “With the rise of women entrepreneurs, we want to get these girls ready, because entrepreneurship is a huge space for these girls to make their mark,” Naseem adds.

As the only JA program of its kind nationally, Howard County’s Rising Women is serving as a pilot. The student companies (which are liquidated at the end of the semester with profits donated to charity) have increased their profits with each term. The fall 2016 cohort’s company, Medley, which created and sold a community cook¬book, was chosen as one of 15 teams from nearly 700 across the country to compete at the JA National Student Leadership Summit in Washington, D.C., last June. Now, other counties are interested in replicating the program, Naseem says. 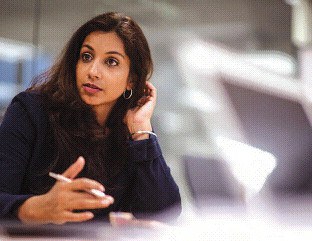 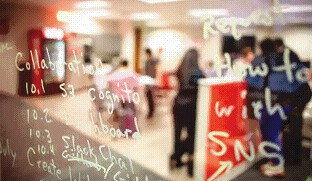 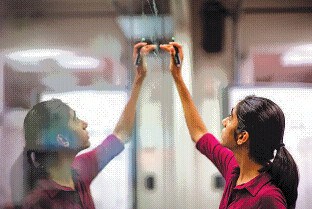 Part of what makes the program successful is a focus on empowerment. While local entrepreneurs act as mentors, all of the decision making comes from the young women themselves. “Ultimately, each decision made is a decision by the company,” explains Naseem. “We offer feedback,” Naseem says of herself and the other mentors. “We give advice, but the ultimate decision is within the company.” This is one of the many ways the curriculum prepares girls for professional lives outside of school.

The 13-week structure means students have to work fast, jumping right into the spirit of

entrepreneurship. “In the first session, we start considering some of the needs in our community, because entrepreneurs solve problems,” says Naseem. The young women head out to conduct informal surveys and interviews within the community, then form groups of potential business ideas based on that market research. Next comes a memorable experience for many of the young women: a “Shark Tank”- style meeting in the third week, where the groups pitch their ideas to a panel of mentors and receive feedback.

“We had to explain how we planned on making the product, how much we expected it to cost, and how we expected to distribute it,” recalls Josie Yodzis, a 15-year-old freshman at Marriotts Ridge High School, whose group was chosen to be one of the companies. “I’m not one for public speaking, so it was a little nerve-wracking, but everybody was really encouraging and they walked me through it when I got stuck,” Yodzis says. “It was pretty cool.” Her group’s idea—manufacturing and selling headbands sporting Howard County high school logos—became HoCo Heads, one of the two companies formed during the spring 2017 semester. Yodzis chose to be part of the finance department because she likes math and because her dad used to work in finance. And even as a ninth grader, she has an eye on how the experience could affect her future. “Even if I end up not going into business, it’s good to have an idea of how it all works for when I’m doing things on my own,” she points out. “Like buying a house.”

Mentors find value in the experience, too. “I wish I had something like this when I was their age,” says Patricia Diaz, an entrepreneur and business consultant based in Columbia. “It’s really neat to see their learning process, how they solve problems and the emotions around all of the different challenges they face throughout the process.”

In the fall 2016 semester Medley, the cookbook company, ran into a printing challenge. “There was this conversation about a failure, and the CEO was in front of the room talking to the team in a strong way, saying, ‘Hey, we’ve got to get it together,’” Diaz recalls. “It was encouraging to watch them as a team come together—all of them owning up and saying we have to run the business differently.”

Mentors see big changes in the young women over the semester. “Self-confidence is what stands out to me,” says Diaz, who has taught a variety of Junior Achievement classes. “They realize, ‘I do have a voice, and I’ll act on my voice.’”

The students recognize growth within themselves as well. Ashley Martin, Jelena Chen and Annabelle Gao sit on a couch during the spring 2017 semester, studying a laptop, animatedly discussing Boundless’ annual report. When asked what she’s gained from the experience, Chen, a graduating senior at Mt. Hebron High School who is the company’s vice president of supply chain, says, “For me, it was talking to adults in a professional manner, because you don’t really get too much experience with that in school.” Chen continues, “I’m naturally pretty shy, so when it comes to talking to people, strangers especially, I get pretty nervous.” After participating in the ‘Shark Tank,’ she says, “I feel like I’ve really honed that skill.”

The friendships they have formed here will also last a lifetime. “There was a group of five of us from the last cohort, we all go to different schools, we didn’t know each other whatsoever,” says Martin. “Now, we talk in our group message every day—we talk about things that don’t even relate to business,” she adds with a laugh. “Having that much work and being so invested in the business made us close friends.”

And what do they think of the focus on young women? “It’s amazing,” says Martin. “It’s cool to see all the support we have, since we are a minority in the business world. Everyone wants to be involved.” *