Many women in business seek support through networking 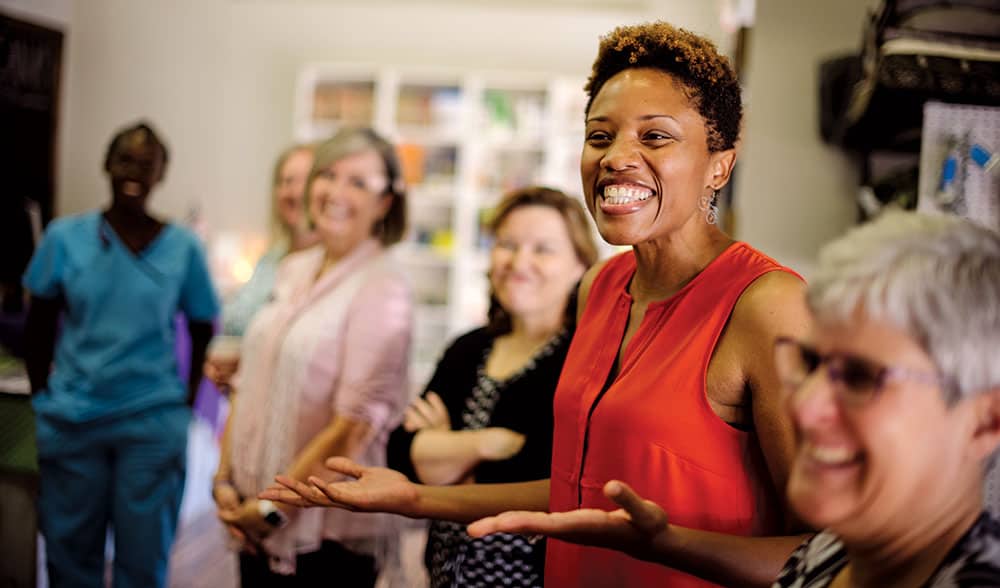 As certified life coach Sherry Samuels built her business, Chrysalid Transformations, she knew networking would be crucial. But she cringed at the idea of being in a room with dozens of people she didn’t know and just “pushing business cards in each other’s faces.”

Traditional networking, she says, calls for constantly selling herself. “I know I am good at what I do, but can I walk into this room and get you to be interested in me?” Samuels says she’d prefer to establish relationships and get to know people personally. Most networking events, she says, consist primarily of, “’Who are you? How can you help me?’”

Networking is crucial for advancing a career, according to a recent Wall Street Journal article. But women sometimes have difficulty creating and joining existing networking activities. The main reason, the Journal said, is the dearth of women in positions of power who can make introductions and referrals or who can mentor other women.

Despite this, women are persevering, seeking out mentors and offering each other a hand up in business, particularly in Howard County.

Ms. Biz was started by Lisa Stearns, a business coach and motivational speaker, who has become a mentor for Samuels.

Samuels says that she and Stearns have spent a lot of time discussing the directions they want their businesses to take. Overall, she says, Stearns offers guidance without seeming to expect anything in return. “She truly wants you to be successful. It’s the idea that when you win, I win.”

Stearns started Ms. Biz Mornings in 2013 to support what she calls “heart-centered women in business” and to help them with networking, marketing and establishing a community.

Women entrepreneurs often go it alone, Stearns says, but this is against their nature. “Women are naturally, biologically, community builders,” she points out.  But it’s often difficult for self-employed and entrepreneurs to find support. “Women need to figure out how to express our doubts, concerns, joys, successes and ideas,” she says. “Where do you get that when you are an office of one?”

To ensure that cost isn’t a barrier, Stearns sets the fee at just $5 per event. In addition, members host meet-ups at their businesses, helping them with exposure.

Many small businesses in Columbia are tucked away in village centers and industrial parks, she points out. “You can’t see them and don’t know where they are,” she says. An event host may end up with 20 or 30 women who previously didn’t know they existed.

During a recent meeting, Samuels says, a young woman who was new to the group was noticeably nervous. “When she got up to speak, she stumbled over her words, and we could all tell she was new and unsure,” Samuels recalls. But the group stepped in to reassure her. “Everyone else spoke up and said, ‘it’s OK, start over, don’t worry, we’re all family here.’”

When you support someone else, Stearns says, it comes back to you. “You have to reach out, have an open heart and have a giver’s mind.” 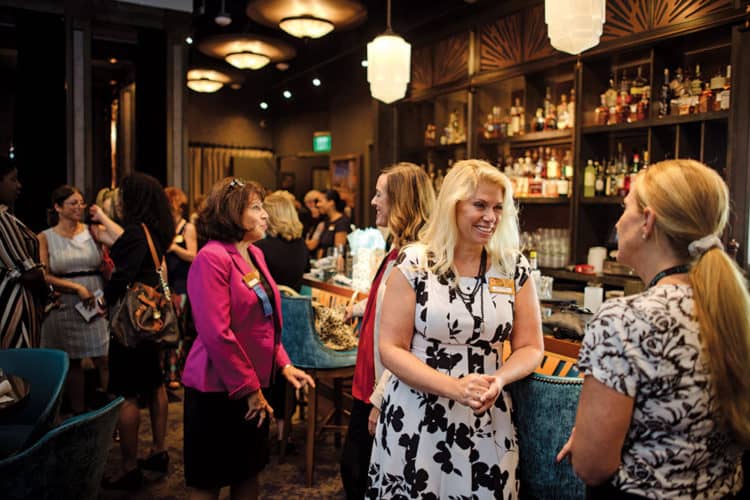 Karen Pitsley, owner of Transforming Architecture, chats with other members of the Business Women’s Network group at the monthly meeting held at Cured restaurant in Howard County.

A Long History of Making Connections

In recent years, female-focused networking groups like Ms. Biz Mornings have cropped up around Howard County. But one group has roots that go back many decades.

Since 1979, the Business Women’s Network (BWN) of Howard County has offered opportunities networking and community service opportunities to hundreds of women.

More than 200 women from different industries, ages, backgrounds and stages of their professional careers are part of BWN and gather to support the successes and well-being of other BWN members at least monthly. 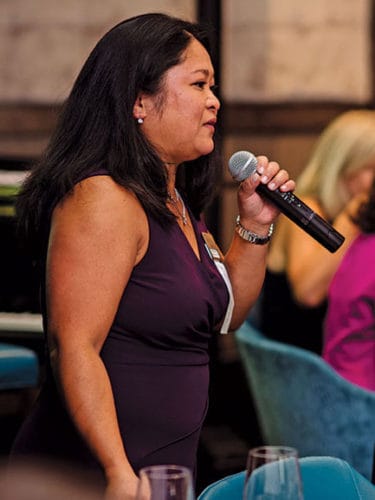 Current BWN Board President Faith Wachter, who owns an eponymous consulting and social media solutions company, says that regular lunch meetings have time set aside for members to share testimonials about the impact they’ve had on one another.

“I tell folks that this is where the networking rubber meets the road,” Wachter says. “It’s always an uplifting way to end our meetings and shows the immediate benefits of membership.”

The organization was founded in 1979 by a group of stay-at-home mothers who were looking to help each other re-enter the workforce. They began by meeting for lunch at Tersiguel’s on Ellicott City’s Main Street, talking about what jobs were available locally and how they could help each other find new opportunities.

Then-Howard County Council members Liz Bobo and the late Ruth Keeton were integral in creating the group that quickly attracted new members. By the mid-1990s, the network incorporated as a nonprofit organization dedicated to promoting the advancement of women in all sectors of the business community.

In the early 2000s, BWN launched its website, which serves as an online membership directory, marketing channel and community calendar for members. Through the years, the BWN’s mission has been to promote and support professional women in their careers as executives, business owners and leaders. And it’s stayed true to that goal, says Wachter.  “We’ve always been about women helping other women in their professions.”

Recently, Wachter says, the organization has started to focus on networking skills. “Networking can be daunting,” she points out. But it’s essential to success in the business world.

And it requires skill, she says. “It’s not just handing out business cards. It’s about actively listening to people and connecting them to other people who can help them out.”

While Wachter says that BWN hopes to better use social media and other online resources to encourage engagement, nothing beats meeting other business owners in person. “The women in BWN are quick to connect you with people you should meet and just as quick to refer you to others they’ve met.”

When Lisa Dolce founded Pinnacle Career Resources, Inc., in 1999, her intention was to help anyone who was stuck in an entry-level job to move forward, advance in their career and earn a higher wage. Dolce’s background is in career coaching; she worked for several years developing work experience programs at Howard Community College prior to creating Pinnacle.

She designed Pinnacle with a network of community partners, including the college, and offered computer training and other professional services. She quickly realized that most of her clients were women, and many were single mothers. They came from all walks of life, educational levels and cultures.

“Many did not know their value and what they had to offer in the world,” Dolce says. So she began to add such services to Pinnacle’s offerings as small group empowerment circles and resources to help women to gain confidence.

Over the years, Pinnacle has helped more than 2,500 Howard County women improve their job prospects.

In 2015, Dolce started The Launch Studio, a new division of Pinnacle Career Resources that helps female entrepreneurs with small business startup coaching, management consulting and training. One of its offerings is helping women find affordable office space, so they can go from “working at their kitchen tables to a professional environment,” Dolce says.

In her decades of helping women business owners, Dolce has found that isolation can be a problem. “I see so many women who think they have to do everything on their own,” she says. “We take on so much and many of us rarely ask for support.” Instead, she recommends that women take advantage of other like-minded, supportive women. “They can be cheerleaders, sages, resources and accountability partners,” Dolce points out. “Networking, or being in community with other women, is essential for growth—in your life and career.”

Itching to start passing around your business card to like-minded women? Here are some additional women’s networking organizations to consider: