Young baseball players travel from Howard County to Cuba and learn a lesson on team spirit.

Many Howard County kids grow up with a world of opportunity at their doorstep. With their comfortable homes, first-rate 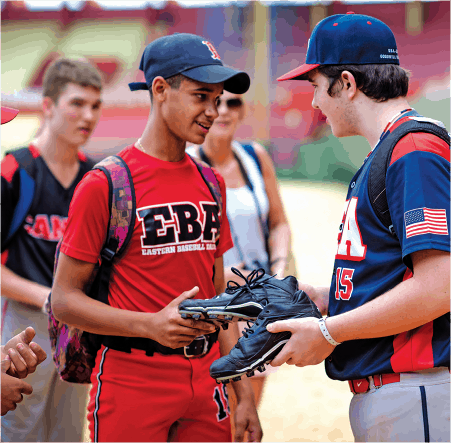 schools and sports and cultural activities that foster development, too often the county’s youth may not realize that others their age don’t have it quite so good. That truth is a big part of the reasoning behind a trip that mothers and their teenage sons recently took to Cuba. The group used the common thread of baseball as a conduit of goodwill.

In all, 11 boys from the county, most part of the Western Howard County Renegade travel team, visited Cuba in February to take part in a baseball cultural exchange program. In addition to playing several games against Cuban peers in various parts of the country, the boys visited schools and neighborhoods, distributing around 600 pounds of donated equipment and school supplies that they’d brought from the U.S.

The trip was the brainchild of the boys’ coach, 54-year-old John Roschella of Cooksville. “I wanted the boys to have an experience that went beyond just baseball and included an aid project and cultural exchange,” Roschella explains. “Cuba was appealing since it was recently opened to Americans.”

While Roschella got the project off the ground, it was the teens and their mothers who took care of much of the planning, fundraising and trip coordination.

Sue Ewart, 49, of Ellicott City, jumped at the chance to get her 16-year-old son Jake involved in the project. “I was excited about traveling to Cuba,” she says. “I thought it would be an amazing experience for Jake to take part in a sport he loves and to see a different perspective on life.”

Ellicott City’s Jackie Crispell, 52-year-old mother to Phillip, 15, was also intrigued by the idea and immediately jumped into action to help coordinate the trip. “A group of moms met to talk about it and we were all excited to expose our boys to a culture so unlike what we have here in Howard County,” she says.

The trip, by all accounts, exceeded everyone’s expectations. 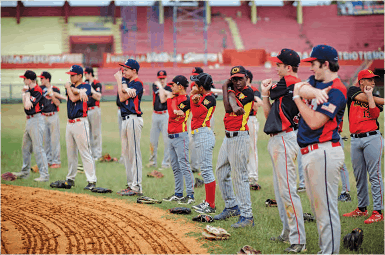 The players, who traveled with Canadian-based Caribbean Baseball Goodwill Tours, comprised one of the first American youth teams to play in certain areas of Cuba. The trip centered on the Matanzas region of the country, about a two-and-a-half-hour drive from Havana, staying in the beach town of Varadero.

Each day, the team headed out by 8 a.m. The day’s schedule generally included a game along with some sort of cultural exchange. On several of the stops, the team members shared their collection of donated items, including baseball equipment and school supplies. They each brought along smaller trinkets and toys to give to local kids, surprised by the joy such small gifts brought to the Cubans.

The team was often greeted by large crowds, fascinated with their American visitors and anxious to extend a warm, Cuban welcome. “At the end of the games, the teams would come over and talk to our boys,” says Crispell. “They were all incredibly friendly and gracious.”

While the mothers expected the boys to enjoy the time on the baseball field, the transformation they saw in each of their sons was less expected. “Our boys each have their own equipment, from multiple bats and gloves, to their own helmets and cleats,” says Casey Conway, 46-year-old mom to Ryan, 16. “They were amazed to see that the Cuban kids shared all their equipment, often 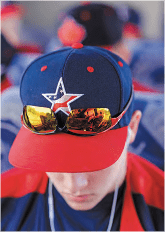 having just one helmet and bat per team.”

Before they knew it, says Conway, their sons were asking if they could hand over their own personal equipment to their newfound friends. “We saw our kids giving away their balls, helmets, bats, gloves and even their cleats, right off their feet,” she says. “We watched them open up and grow.”

Usually intense competitors, the boys showed their Cuban counterparts a light¬hearted, friendly side. “I think our boys saw that you don’t need all the equipment and material things to be happy,” says Ewart. “The Cuban kids were so joyful.”

The Cuban boys were also good athletes, a fact that became another lesson for the Howard County boys: It’s not the equipment that makes the athlete. Player Jake Ewart was impressed by the Cubans’ skill level and enthusiasm for the game. “I felt a little guilty walking out onto those fields with all our nice stuff,” he says. “I was surprised by how good they were with as little as they had to work with.”

The fields, dugouts and surrounding towns were a dramatic departure from what the team is accustomed to in the States. “Even the pro stadium where we played was a good 50 to 60 years old,” says Roschella. “We also played on the oldest field in the country, which dated back to the 1800s.” The quality of the field wasn’t great and the base plates were dated, but everything worked, Roschella pointed out. Even so, she says, “It was unlike anything our boys have seen before.” 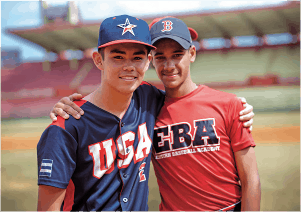 During the trip, the boys were untethered from cell phones and computers, allowing them to connect with each other and the Cuban players, face to face. “They were present in the moment, talking and forming relationships,” says Conway.

At the end of the trip, Conway asked her son to describe his favorite part. “He told me it was playing at the poorest fields with the worst conditions,” she says, “because the people were the happiest and friendliest there.”

That, she says, is the takeaway she hopes Ryan and his friends will remember. “I’m really hoping this filters out into his life back here,” she explains. “I wanted him to learn a different way of looking at things, and I think this trip gave him that perspective.”*