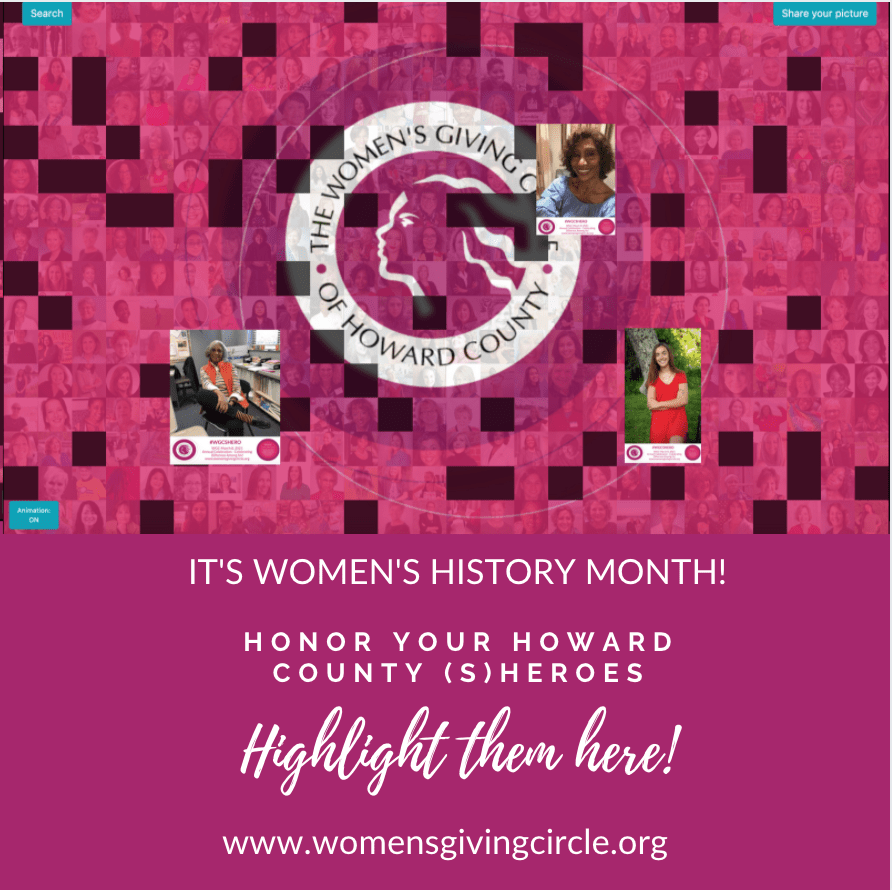 The Women’s Giving Circle of Howard County is highlighting “(S)heroes Among Us” this year during our March 8, 2021 Annual Celebration. We believe all women are (S)heroes in their own ways – women admired for their courage and outstanding achievements on behalf of our community.

This year, we are proud to feature five (S)heroes Among Us who have led critical efforts on behalf of organizations that we have funded this year through our Emergency Response Network, who are focusing on widespread community needs affecting women, their families, and the broader community:

We thank these (S)heroes for their efforts and we are excited to highlight all Howard County (S)heroes on our WGC (S)heroes Among Us Virtual Mosaic Wall. We invite the community to  highlight YOUR (S)heroes on the mosaic before March 15. It’s easy, fun and meaningful. To date we have over 450 women and their stories represented, and after March 15 it will become a permanent part of the Women’s Giving Circle moving forward.

Our keynote speakers are powerhouse national (S)heroes who will discuss “Democratizing and Diversifying Philanthropy Through the Power of Collective Giving”. I invite you to join us to hear from national philanthropic leaders Valaida Fullwood and Sara Lomelin about how the landscape of philanthropy is shifting, and how collective giving is continuing to play a transformational role in bringing in many more — and more representative —  women donors to the table to create more equitable communities, and make a difference through the power of giving, together. Learn more here.

On behalf of the Women’s Giving Circle Advisory Board, I thank all the (S)heroes in Howard County for making our community better in so many ways, and I hope you can join us on March 8 to recognize all of you!

shero – /ˈSHirō,ˈSHērō/
Noun
A woman admired or idealized for her courage, outstanding achievements