WHEN THE MAN OF THE HOUSEHOLD ALIGHTS, HIS DAUGHTERS’ HEARTS FLUTTER

The charismatic, high-spirited accountant Hyman Winik was rarely seen in his own home. Work was my father’s blood, his food and his breath. All 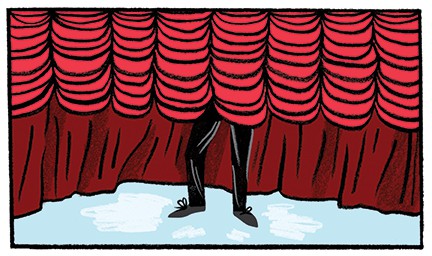 day he slaved at his office in the city, all night at his desk at home, all weekend with ball games blaring on TV, the adding machine kerchunking, the phone ringing, the dishwasher running, the crazy dog barking nonstop in the yard, which begins to explain why the entire household was shouting all the time. Meanwhile, my father had partial hearing loss, reputedly from diving off the high board in his youth and from firing rifles in the Marines, though to us the deafness seemed suspiciously selective.

Jane: The Herzbergs want us for cocktails on Saturday.
Hy: (Doesn’t like the Herzbergs, doesn’t look up from his dinner.)

Jane: The Herzbergs! Invited us for cocktails! This Saturday!
Hy: What about the Herzbergs?

Jane: Could you please wear your goddamn hearing aid?
Hy: What?

Jane: For God’s sake, Hy. You’re driving me nuts.
Hy: If you think I’m driving you nuts, just wait till we get to the Herzbergs.

Herzbergs or no, my parents would surely find something to do on Saturday night. They were like movie stars to us: appearing briefly, waving, drinking, yelling, getting dressed up in one costume or another and leaving again. On summer weekends, they would stop by the beach club to visit us and our babysitter. They looked stunning in their emerald green golf caps, their tanned legs and arms set off by one ethereally pale ungloved hand. Then it would be home to change – Mommy standing in front of her neat rows of labeled shoe boxes: Navy slingback? Black backless sandal? Beige patent pump? – and back to the club for some barn dance or golf dinner or clam bake.

We would do anything to get their attention, especially his attention. Let’s have a headstand race, Daddy, please? we would beg as we readied ourselves in the froggy position he had taught us, knees balancing on our elbows. Daddy could stand on his head for 20 minutes. It was almost scary, watching him, so big and heavy and upside-down, his face reddening, his forearms trembling, and when he finally lowered his feet to the floor, it was as if the Chrysler Building had toppled – dishes rattling on the dinner table, tidal waves in the milk cup.

In my earliest memories of my father, he hardly makes an appearance. It’s the build-up, the anticipation I recall, like the memory of a place you spent years planning to visit, and then saw only during an airport layover. We moved from Manhattan to the Jersey shore when I was two; in those early days, Daddy commuted by train to his office at 1410 Broadway. In the evenings, we would pick him up at the station in our cavernous Renault, Nancy and I in the backseat, so small that our ankles stuck straight over the edge, Mommy 2,000 miles away in the front, wearing her car coat and plastic rain kerchief over her perfectly smooth hair.

When our family got a second car, we female Winiks were somehow even more paralyzed by anticipation. Instead of going to get him, which at least felt like involvement, we just stayed home and waited. And waited and waited and waited. Because little girls can’t eat dinner at 7:30 at night. (And his arrival would be greeted not immediately with dinner but with a relaxing cocktail and hors d’oeuvres — shiny circles of hard salami, stinky blue cheese, and stinkier liverwurst, cut-up cubes of Swiss speared with toothpicks and arrayed around a shot glass of Colman’s Mustard.) We girls were fed our dinner in advance.

We would be in our favorite smocked nightgowns, little red flowers printed on white flannel, thin and pilly from being washed a zillion times. Dinner would have been something like Shake ’n Bake pork chops with applesauce and canned corn, or one of many fine recipes using Lipton’s Onion Soup Mix. Sipping her gin martini, smoking, Mommy would tell us jokes she had heard on the golf course, funny stories with priests and rabbis and lightning and three people jumping out of a plane.

Hours rolled by every minute as we waited for Daddy to come home and rescue us from our X-chromosome swamp of lugubriousness. It was like sitting in the theater waiting for the curtain
to rise. It was like waiting for the phone to ring or the mailman to show up. It used up every drop of patience I had available for the rest of my life.

Finally, finally, FINALLY! the sound of the garage door, drowning out the constant low hum of our many home appliances. Our ears pricked up, we shoved back our chairs and tore through the house like hockey players, elbowing in front of each other, stepping on the hems of our nightgowns. Just as we reached the foyer, the door would open and we hurled ourselves against him, our whole weight into his arms, his coat, his scratchy face. He smelled like outside, cold air and New York, and cigarettes in the car, and he dropped his heavy briefcase and picked us up, his big girls. Who lived only for this moment, for his return.

Who would you want to be in this little vignette? Would you want to be the awaited or the one waiting? Would you want the car and the briefcase and the Second-Coming-of-Christ welcome, or would you choose the kitchen table, the pesky kids and the Shake ’n Bake? If you’re a woman, it seems, you can have the car and the briefcase, but nobody’s going to assemble the Swiss cheese on a plate for you; no one will sit spellbound waiting for you to appear. True, if you’re gone long enough, your children may grow impatient — but that’s largely because they’re waiting for you to come home and start the pork chops. Nobody else can shake and bake like you! No matter how far you go, you will never be the thrilling, elusive master of the universe. You walk in the house and you’re back in business, Queen of the Mundane. Whose fault is this? Men’s, genetics’, the media’s, the culture’s — or yours, because you wouldn’t have it any other way?

It’s what we now call having it all. *