Sugar Has a Story to Tell

Shortly after Clarksville resident Marla Stahl adopted a mixed breed terrier she named Sugar, the dog went after a bird. Taking the dog back inside the house, Stahl told Sugar to be kind to all animals.

Over the next week, Stahl would open up her curtains to find different critters scratch¬ing at her window including a squirrel, frog 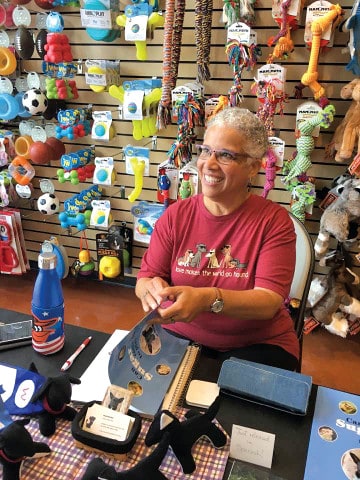 , cicada and bunny. She told a neighbor about the odd visitors. The animals, she told her neighbor, “are trying to thank me for keeping Sugar in the house or they are trying to ask her to come out and play.” The two laughed and Stahl suggested the story might make a good children’s book. After their talk, she ran downstairs to her computer and wrote her first book “Can Sugar Come Out to Play?” in a day. “It was pretty quick once that flash of inspiration comes,” she says.

Though she published her first book in 2015, after retiring, Stahl’s love of writing dates to fourth and fifth grade, when she wrote stories for her teacher’s classroom newsletter. Stahl’s second book, “Lucy the Amazing Wonder Dog” came out in 2016, and features her ordinary yet extraordinary mixed breed dog. This year, Stahl published two more books “Sugar Goes to the Dentist” and “Mason the Ambassadog.“

“Dentist” was inspired during a chat with her dental hygienist and “Mason” was inspired after Stahl visited Puerto Rico and saw stray dogs roaming the streets. She began donating to Second Chance Animal Rescue of Puerto Rico and soon became friends with the head of the agency, who suggested Stahl write a story about a disabled pit bull named Mason.

For every book Stahl sells, a portion goes toward a charity—usually a small animal rescue organization. Stahl reads to children at area schools and at local pet stores. “It is fun being a little cottage industry,” she says. “I build relationships with the people I meet.”