For 79-year-old Toby Orenstein, a love of performing started very early in life. She recalls being in a pilgrim play in kindergarten. 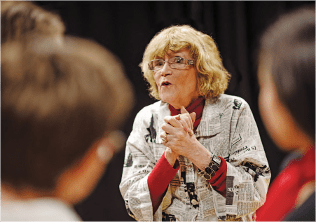 “I was pushing everybody around, saying everybody’s lines,” she recalls. Her actions as a 5-year-old foreshadowed things to come.

Orenstein has gone on to create a fulfilling professional life, immensely enriching the arts community in Howard County along the way. She founded the successful and still-robust Toby’s Dinner Theatre of Columbia more than 35 years ago. She’s served as chair and director for the Howard County Arts Gala for the Arts Council multiple years. And, at the behest of her friend, the developer James Rouse, she started a nonprofit theatrical arts school for the then-burgeoning community of Columbia in 1974. The mission of the school, the Columbia Center for the Arts (CCTA), was, and remains, “to educate through the arts by creating theatrical experiences that inspire thought, action, creativity and change.”

Out of the CCTA came the Young Columbians, a dynamic performance troupe of young people aged 8 to 21. Its graduates include several Broadway actors and, most notably, former Howard County resident Edward Norton, acclaimed actor, activist and Academy Award nominee—who is James Rouse’s grandson.

The first performers to debut as the Young Columbians were a talented group of children aged 10 to 18, who lit up stages across the country from 1975 to 1979 with a program of American patriotic songs. Their bicentennial show at the Lincoln Memorial in Washington, D.C., was aired on live television. “Time Magazine” called the performance “one of the best productions of the bicentennial,” according to Orenstein, and subsequent invitations to perform at prestigious locations across the country followed—from the White House to Disney World.

Friedman was a company member of one of the first troupes. And while he’s gone on to enjoy a varied career in the entertainment industry—from playing several leading roles in regional theater performances to serving as a member of a production team of a new Broadway show to starring in his own national TV show and much, much, more—he recounts his time as a Young Columbian with fondness.

Friedman estimates that he’s performed in 1,000 shows with the Young Columbians. “They’re my brothers, my dearest friends,” he says. “They’re the most talented people I know.” And familiarity builds trust, he adds. “I’m never as comfortable with other performers as I am with them.”

Friedman attributes that trust to Orenstein. “She can be demanding. But she creates an environment of trust, because s

he knows who you are. She knows where your strengths are.” Orenstein’s confidence in her young actors has a positive effect, says Friedman. “Because she believes in you, you believe in you.”

Alex Franco learned early what is possible when someone, namely Orenstein, believes in you.

As a 7-year-old, before joining the troupe, she took acting classes from Orenstein at the CCTA. That gave Franco the confidence to audition for and earn a spot as a Young Columbian. It was, she says, like joining a family.

“It was such a joyful experience. I made dear friends that I still have today,” Franco says. As a part of the company, she says, she felt accepted for who she was and at the same time pushed to be better than she thought she could be.

“I was a chubby child. But I never felt that here. I always had the confidence to be on stage,” Franco says. “She [Orenstein] sets the bar very high and makes you reach it. And she does it with so much love.” As a result, says Franco, “You end up feeling so wonderful about yourself and your talents.”

Orenstein learned long ago the importance of showing her young charges that she cares. After receiving bachelor’s degrees in both theater and education from Columbia University, she was selected as one of a very few teachers to work on a federal education project launched by Eleanor Roosevelt called the All Day Neighborhood School Project, whose goal was to integrate the arts into education in underserved neighborhoods in upper Manhattan.

Initially, recalls Orenstein, she felt like she was making absolutely zero headway with her fifth grade students from Harlem. Then one day, she dropped a container of crayons in the school hallway. One of her students bent down to pick them. In response, Orenstein said to the little girl: “I love you.” The child’s simple, spontaneous gesture, and Orenstein’s immediate and genuine show of appreciation, established a bond that the other students observed. The little girl, says Orenstein, “broke the barrier. She trusted me.” It was a lesson the educator brought to the Young Columbians.

That trust and compassion is a large part of why Franco and other former members maintain ties with the troupe long after ‘graduating.’ After attending Brown University as an undergraduate and eventually earning her law degree, Franco settled in Howard County with her husband to raise four children. Looking for an opportunity for her oldest son to experience what she herself experienced as a teenager with the Young Columbians led Franco back to Orenstein, who remains as active today as ever in the troupe.

A PLACE TO GROW

Franco’s eldest son has dyslexia, making traditional classroom learning a challenge. He also suffers from dyspraxia, a condition that affects a person’s gross and/or motor skill coordination. “He was failing at school; he was failing at sports. He was ridiculed by his coaches,” she recalls.

It was then that Franco steered her son in a direction where she herself had found solace as a child.

As Franco’s son got more deeply involved in CCTA and, eventually, the Young Columbians, so too did his mom. She joined the CCTA staff in June 2012 as the Young Columbians parent liaison, theatre instructor and camp counselor. In 2014, she became CCTA’s managing director. The role has allowed Franco to see, from a different angle than when she was performing with the Young Columbians, Orenstein’s intense dedication to the troupe.

“There is not a day that goes by that she doesn’t think about the Young Columbians. It is her baby, her legacy,” Franco says.

The young actors-in-training who work under Orenstein’s tutelage return that commitment. Even as the pull of academics, school plays and other demands compete for the young pre-professional actors’ time, they remain dedicated to the troupe, coming from as far as Montgomery and Anne Arundel counties to learn from the seasoned teacher.

Orenstein, Friedman says, “really cares about each child who is a part of the program.” Orenstein deflects attention from her achievements, which include a Helen Hayes Award for Outstanding Director of a musical, a spot in the Maryland Women’s Hall of Fame and Columbian of the Year. “I found all kinds of awards just stuck in my drawers,” Orenstein says. “I keep doing. I don’t think about it.”

She tries to encourage her young charges to model similar behavior. “They learn that there’s so much out there and not to be afraid to try these things,” she says.