My grandmother has clear preferences when it comes to gifts: “If I can’t eat it or wear it, I don’t want it.” 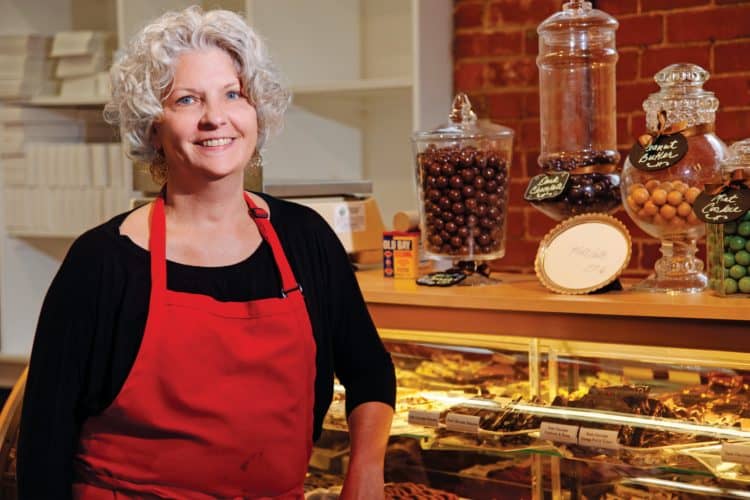 Edible treats appeal to both the giver and the recipient. On the giving side, we can feel assured that our offering will be enjoyed. For the giftee, there’s nothing left behind to clutter up your home. A box of chocolate or a family friendly tin of gourmet popcorn will disappear in a blink.

If there’s a sweet tooth on your shopping list this season, look no further than the entrepreneurs on Main Street in Ellicott City.

Sweet Cascades Chocolatier has been shelling out delicious treats in historic Ellicott City since 2005. Owner Sue Whary started her business as a caterer, providing indulgent chocolate fountains for special events—the origin of the name Sweet Cascades. When she found a shop for lease on Main Street, however, she and her husband, Rick, began making handcrafted chocolates like truffles, caramels, peanut butter cups and more.

The shop is small and cozy, with décor that features muted colors that don’t dis¬tract from the merchandise. A massive glass case in the center of the narrow shop displays all manner of enticing chocolates, across from tables piled with colorful, giftwrapped treats. A handful of tables on a porch tucked in the back overlook the river winding between buildings.

Whary started her chocolate fountain business as an alternative to the desk job she held. “I felt stuck,” she admits. Boredom soon sparked creativity and a desire to do something exciting—each catering event introduced Whary to new people and new places. 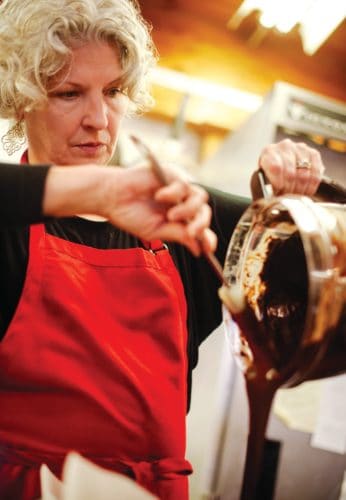 Soon, the catering gigs led to candy making. She taught herself to make truffles, peanut butter cups and malted milk balls. The Sweet Cascades offerings are decorated with chocolate swirls and scalloped edges; while consistent they aren’t so uniform that they look factory-made.

Whary seems to enjoy dipping things in chocolate. If you bring in a bottle of wine, she’ll coat the whole thing in molten sweet-ness. When it’s time to consume the extravagant treat, pull on an embedded ribbon to disrobe the bottle. The chocolate-dipped wine, says Whary, is a holiday favorite. Has there ever been a more unusual and delectable pairing of wine and chocolate?

Other holiday themed treats include Santas and Christmas trees, as well as custom Hannukah pieces, anywhere from menorahs to dreidels.

After the flood that swept through Ellicott City in July 2016, Whary found a kitchen space in Savage Mill where she already operated a second shop. She moved back into her Main Street space in February 2017. She’s happy to be back, she says. “There’s no place like Main Street.”

Her next goal is to expand into the building adjacent to her Ellicott City shop, adding an ice cream parlor on the ground floor and using the second floor space to host chocolate workshops. As for the third floor? “I’m bringing in my disco ball,” she says with a grin. Indeed, she owns a disco ball and plans to have it up and running for Midnight Madness.

The disco ball would fit nicely less than a block down Main Street at E.C. Pops. Classic ’50s rock blasts from the building throughout the day, morphing into’80s dance tracks at night. E.C. Pops stays open until 10 p. m. most nights, doing a brisk business in sweet coated popcorn, fudge and other treats.

The decision to keep late hours was a no-brainer, says owner Lance Sovine. The festive store with its blaring music attracts after-hours browsers from Main Street’s bars and restaurants, some drawn to the tunes, others with a craving for something sweet. “The party never ends here,” Sovine laughs.

Sovine discovered Ellicott City’s Main Street after he moved to Maryland with his partner, who was transferred here by Walmart. Once he saw the way 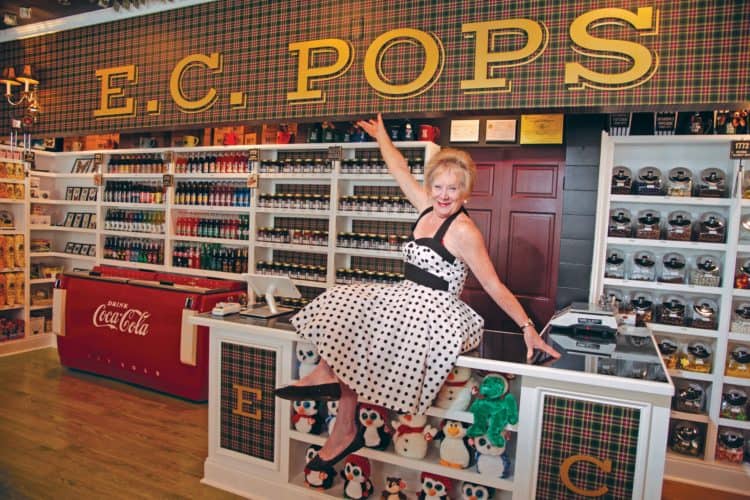 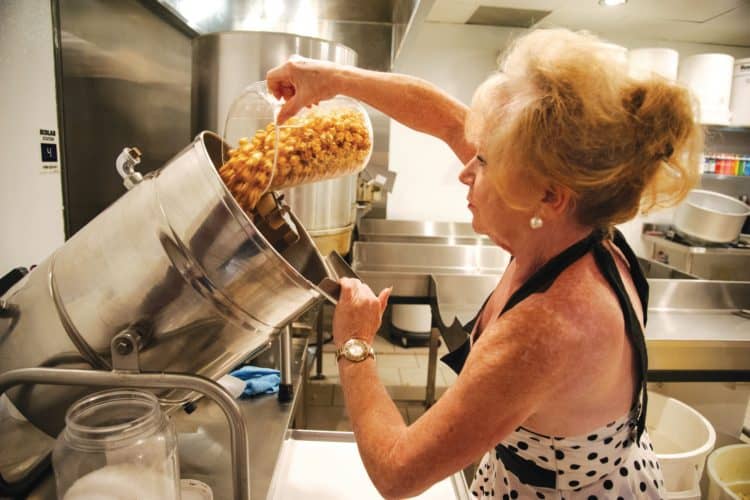 the community came together after the 2016 flood, Sovine decided to quit his job (also at Walmart) and open a small business. “Everyone—from the businesses to the customers—supported each other so fiercely,” he says. E.C. Pops moved into its space as many other businesses were finishing renovations. “I said, ‘I want to be part of a community.’”

Inside the shop, a wall of popcorn competes for attention with brightly colored treats and toys. Virginia Atkins stands behind the counter in a cherry-printed vintage dress.

Sovine and Atkins have been friends since they both worked for Walmart in Connecticut. Atkins had retired and moved to Texas, but Sovine knew she’d want to be part of the popcorn shop. “She doesn’t like to sit still,” he says. Talking her into joining him in the venture was easy, Sovine says. “She’s like family. Plus, we’re both crazy, so we make a great team.” 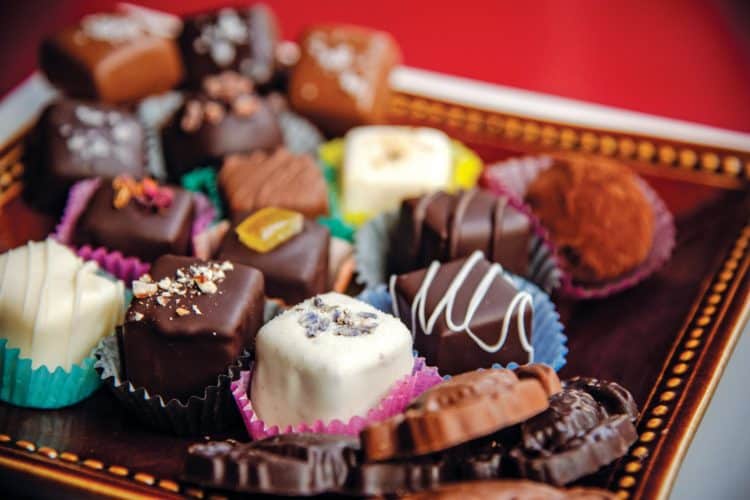 Atkins, who favors bright vintage dresses and upswept hair, makes the 55 flavors of popcorn, from basics like butter and caramel to such offbeat concoctions as dill pickle and loaded baked potato. She also makes all the fudge for the shop, from classic chocolate to pink strawberry and mint. Along with fudge and popcorn, E.C. Pops is stocked with craft sodas and homemade jam.

Sovine says he looks for female vendors and purveyors to stock the EC Pops gift shop. His commitment to empowering women dates to his own childhood. “My mother was physically abused for years,” he says. “I don’t want any woman to be a victim.”

A lot of the products come from tiny startups, he says, pointing to the hand-painted glassware. “That company was started by two women at their kitchen table to make extra money. Now it’s a big company with employees.” As a manager at Walmart in Connecticut, Sovine says, he had many female employees in bad relationships. “I’d do what I could to help them get out of abusive situations. I remember paying out of my pocket for hotel rooms,” he says.

E.C. Pops also raises money for local causes like Blossoms of Hope (see sidebar). It may be the season for gift-giving, but Sovine’s charitable spirit is a year-round thing.

Each year on the first Friday of December, Main Street vendors stay open late for the annual Midnight Madness celebration. (This year, the event will be held on Friday, December 1.) Sweet Cascades, E.C. Pops and other Ellicott City businesses will ring in the holiday season with plenty of sweet gift ideas.*

Before he opened the doors of E.C. Pops, Lance Sovine stapled a dollar bill to the shop’s freshly painted ceiling. “I wanted to remind myself to pick a 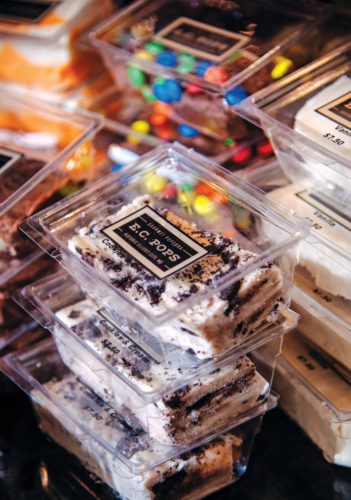 local charity to support,” says Sovine, a former Walmart manager who owns the popcorn and candy shop on Main Street in Ellicott City. When the shop opened in April, the bill remained, catching the attention of customers.

Sovine, who had decided to support Blossoms of Hope, the organization that funds breast cancer support services, decided to leave the dollar in place, and customers began donating their own bills to the cause. Today, the ceiling of the lively shop is plastered with currency, which will be taken down and counted on New Year’s Day, says Sovine. “We’re planning a celebration and presentation.”

In December, the E.C. Pops Facebook page will seek input on a charity for 2018, and as of January 1, the bill collection will start all over again. “Each night, part of closing is pulling out the ladder and stapling dollar—or five dollar—bills to the ceiling,” says Sovine.

For 2018, customers may choose another charity, or may remain with Blossoms of Hope. One way or the other, Sovine intends to continue his relationship with the organization, which plants cherry trees and raises money for the Claudia Mayer/Tina Broccolino Cancer Resource Center at Howard County General Hospital. Last year, E.C. Pops contributed 500 bags of pink popcorn to the annual Pretty in Pink luncheon.