Marriage hasn’t always been about love. The idea of marrying for love has only been around for about 250 years, a recent blip in the history of matrimony. Weddings once constituted pacts to merge land, secure peaceful kingdoms, ensure heirs. 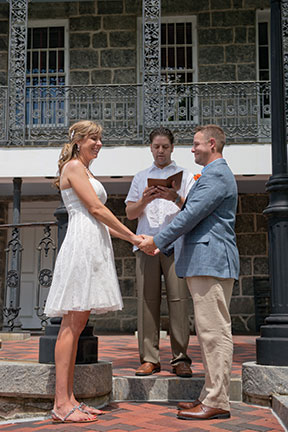 These days, for most in the U.S., the idea of marrying the person you love seems to be increasingly perceived as a civil right.

And well it should be. A good marriage can mean better economic status and a higher quotient of happiness, according to studies by the Pew Trust. Married adults have higher incomes than their unmarried counterparts (26 percent higher among those with college degrees, according to Pew.) Not to mention happiness. Pew found that 43 percent of married folks described themselves as “very happy,” compared to 26 percent of unmarrieds. And having children didn’t seem to affect the situation – married people with children are equally as happy as those without , Pew found.

Some of the 2.5 million couples who marry in the U.S. each year do so in front of a crowd of family and friends, others privately and without fanfare. Some hold ceremonies on beaches in the Bahamas or on mountaintops. Our intrepid writer and her husband chose to seal the deal with a leap from an airplane.

Weddings are a $48 billion industry in this country, with the average pair of “I dos” running about $28,000. But there is only one number that really matters when it comes to weddings. Two. On the following pages, you’ll meet local couples – young, old, gay and straight – who have declared – or re-declared – their commitment to each other.
– Martha Thomas

JESS BROCKMEYER AND EMILY KNOWLES
After an October 2012 ceremony at Swan Harbor in Havre De Grace, Maryland, the couple was legally married the following January.

“Why do you have to get married” is the response Emily, no 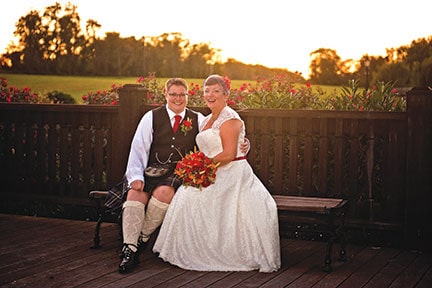 w 33, got when she told her family she was marrying Jess, 42. At the time, same sex marriage wasn’t yet legal in Maryland, but the couple, both teachers, who live in Havre de Grace, didn’t let that stop them. The wives pull each other through difficult times with friendship, compromise and a healthy sense of humor.

Was anybody against your decision to get married?
Jess: My grandfather didn’t come. He told my father that he loved me, but that he couldn’t attend because he didn’t agree. I still visit him with Emily, but I am not going to edit my life for him.
Emily: I think my parents were against it and only through the actual planning of the event and seeing us live our lives, did they change their minds. Or at least they stopped asking us why. I think they get it now, they just don’t like the word.

Advice for others?
Jess: It’s very simple: Marriage is marriage, regardless of gender. We face the same struggles, want the same things. Love is love.
Emily: I don’t have a message for people. If you want to get married, get married, to whomever. I don’t care who you marry, but no one should be able to tell me that I can’t.
Marlayna Photography | marlaynaphotography.com 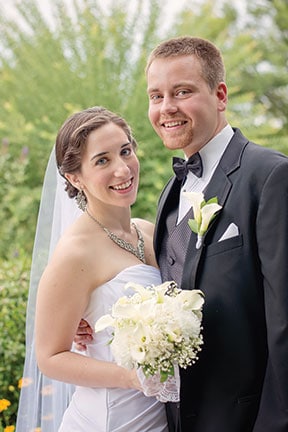 Lauren and Erik are great friends, but when it came time to get married, their
different religious backgrounds – he is Jewish and she is Catholic – put their ability to compromise to the test. With the help of a priest and a rabbi, they created a wedding ceremony that artfully brought their two pasts together.

What was the best part of the wedding?
Says Lauren: Our favorite moment from the whole day happened during the reception. After we cut the cake, we invited all of our guests onto the dance floor for the traditional hora. Even though most of our guests are not Jewish and had never danced the hora before, everyone got on the floor and tried it! All of our guests were dancing and laughing and so many of them were holding hands with a complete stranger – to be in the middle of all of that and to feel all the love and happiness in the room that was for us and because of us was an incredible feeling.

Do you have any advice for others planning blended ceremonies?
It was hard for us to find officiates willing to perform a nontraditional ceremony. Then, it took a lot of time to figure out a ceremony that felt like an equal balance of our two religions. There were many moments that made me feel like I was letting someone down because they weren’t getting what they wanted in our ceremony. We considered having a civil ceremony a few times during the process because it just seemed easier. But all of the difficulty was worth it for the end result.
Marlayna Photography | marlaynaphotography.com

It seemed like a simple wedding, just an intimate affair at a courthouse with the 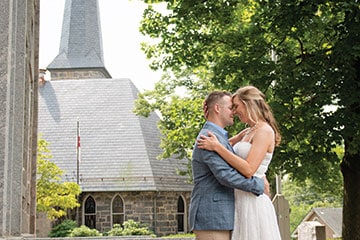 groom’s brother conducting the ceremony. But Keri, a teacher, and Charlie, who works in sales, know that marriage is not all roses and sunshine; it’s hard work. They say that such a commitment should not be taken lightly and recommend that couples take their time building a strong relationship before taking the plunge.

What is the greatest challenge of tying the knot?
The greatest challenge for us has been leaving our independent lives behind and coming together as a unit. We had to learn to lean on each other more. Our wedding was very simple and was intentionally planned that way. The only challenge we both faced was getting through the vows we wrote for each other. He also wrote a vow for my son and it was very emotional.
Marlayna Photography | marlaynaphotography.com

BEV AND JOE PARISI
Ceremony in May 2013, at Warrenton Airpark in Warrenton, Va.

Saying “for better or for worse” wasn’t enough for my husband and me. We 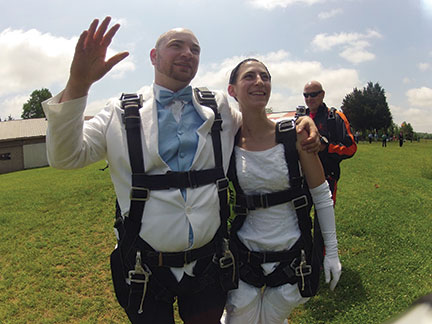 demonstrated our commitment by jumping out of an airplane 13,000 feet in the air. Today the challenges of married life hardly compare to the trial we faced together on day one.

What made you decide to jump out of a plane at your wedding?
Joe’s family is Catholic and my family is Jewish. We were discussing different ways to have a ceremony that would make our sensitive families happy when Joe sarcastically suggested, “Screw it, let’s just jump out of a plane; then everybody’s mad equally.” In the end that’s exactly what we did, and it forced everyone to forget about any religious drama and focus on our commitment to each other.

Advice for others considering a skydive weddings?
People always want to know about the logistics. We had never skydived before, so we jumped tandem with instructors. Most of the ceremony was on the ground because we couldn’t fit the whole family in the plane. My younger brother and Joe’s younger brother jumped with us to show support from each side of the family. The jump was the last ritual before stepping on the glass and having cake. And no, it wasn’t scary. Marriage is scary; jumping is simple.
DC Skydiving Center | dcskydivingcenter.com

Mildred and Charles Alston, both now 79, celebrated their 50th anniversary by 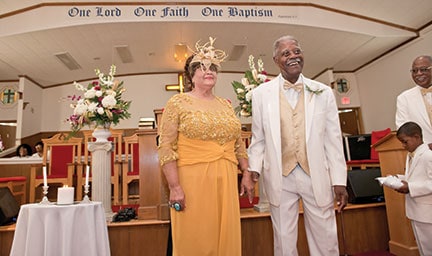 renewing their wedding vows. They found themselves standing at the altar once again, this time surrounded by the family they created. So what’s the secret to marital success? Mildred, a retired education specialist, gives credit to their faith.

What is the most common question people ask you about vow renewal ceremonies?
People ask, “Why did you make this decision?” My response is, “because God had blessed us.” We wanted to share our joy, happiness and gratefulness with family and friends.

Did your kids participate in the ceremony?
Our grandson was my escort at church; our daughter and daughter-in-law were the matrons of honor; our son and son-in-law were the groomsmen; our godsons and adopted son were the ushers.
Marlayna Photography | marlaynaphotography.com

KAREN CHRIST-ACKMAN AND RICHARD ACKMAN
September 2014 at the Milton Inn in Sparks
At age 54, Karen Christ, a comptroller, never imagined that her boyfriend of 20 years 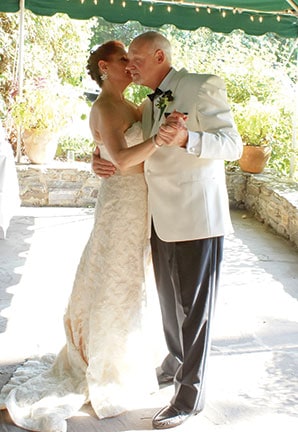 would pull her father aside to ask for her hand in marriage. After the death of a close friend and the hospitalization of a parent, Karen and Richard, who is maitre d’ at The Kings Contrivance Restaurant, realized that life was too short to put off a public acknowledgment of their commitment to one another.

What made you decide to get married after 20 years in a relationship?
I have always known I wanted to be married – but only once and for the rest of my life. Neither Richard nor I had ever married before. After 20 years of dating, we were clearly committed to each other. But just living together was too easy. Marriage was a conscious decision to state that we love each other, choose to be together and want everyone else to know that. I think we also wanted to show each other.

Did your age affect the way you approached the format of the day?
With age there really does come some wisdom. We simply selected experts in their field (chef, florist, minister, musician, photographer) and let them do what they do best. I also realized that just because I was an older bride, it didn’t mean that I couldn’t wear a wedding gown – or that I had to give up on childhood superstitions. No, he couldn’t see me before the ceremony (silly, but important to me). Yes, I made a point to follow “something old, something new … ”

What was your favorite part of the day?
My absolute favorite moment was after “you may kiss the bride”… and boy did he! But right after that moment, I looked my husband in the eyes and he wiped away a tear. It was the most romantic moment I have ever witnessed -– and it was my life.
STUDIO C Photography | studio-c-photography.com*