GROW Your Career | The Road Ahead

A Howard County program is designed to help

When Brooke Abercrombie, a 51-year-old divorced mother of two, heard about Getting Ahead, she jumped at the chance. After being laid off a few years ago from her job as a manager at a for-profit university, the 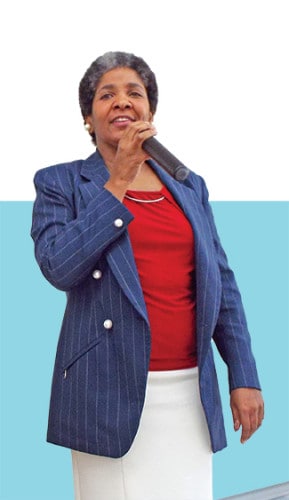 Ellicott City resident had been unemployed. She wanted to get back into the work force but it wasn’t so easy.

“The program was described as a support group to reach economic sustainability,” says Abercrombie, who describes financial stability as her goal.

Getting Ahead is offered at the Multi- Service Center of Howard County in Laurel. The program runs four to five groups per year in eight-week sessions, with a maximum of 12 people in each group. Abercrombie took part in the program from February to April of 2014.

Participants are referred to the free program by county agencies. Most are women, and many are single mothers, unemployed or underemployed, many have limited education, and some are homeless.
Quinton Askew, center manager, trains the Getting Ahead facilitators. The program uses 11 different matrixes for participants to identify their goals – and the route to them.

Askew has seen all kinds of aspirations. One client wanted to get her high school equivalency. Another had a strong educational background but needed to improve her interviewing and networking skills. A third wanted to address mental health issues; a fourth, to find a way to expunge her record of misdemeanors that were hindering her job search.

“Individuals create their own plan,” says Askew.
At first, Abercrombie says, she felt frustrated with the program. “I was looking for a quick fix,” she says, and the program’s self-assessment process is hardly that.

But she soon found support from other participants in the program. Access to county agencies was invaluable in helping her move forward with her plan. Indeed, within weeks of graduating from Getting Ahead, Abercrombie was accepted into a training program to become a dealer at Horseshoe Casino in Baltimore City. She has worked there for the past year, and is also a driver for Uber.
“Things started to fall into place” after graduating from Getting Ahead, she says. “Maybe it changed my attitude, made me more receptive to applying for a job.”

She was so convinced about Getting Ahead’s efficacy that she became a facilitator in the program. “I tell clients, ‘Your problem doesn’t disappear just because you are participating in the program. It’s not a magic wand.’”

Even so, she says, “It got me on the right path. It’s made an enormous difference in my life.” *