Getting to the Lighthouse

A LONG NEGLECTED BOOK TURNS OUT TO BE WORTH THE WAIT

In May of 1983, I flew from New Orleans to New York to take a test, the final exam of “Twentieth Century British Novel,” the last literature course in my graduate program in 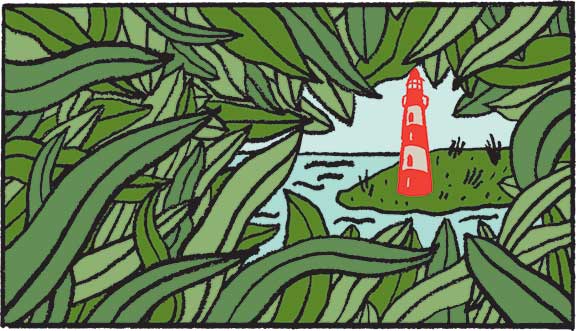 creative writing at Brooklyn College. I was also hand-delivering my thesis manuscript, a 200-page collection of short fiction and poetry titled “BoyCrazy.”

If I had been in class all semester like I was supposed to be, if my brain and then my body had not been hijacked to Louisiana by the “force majeure” that is love at first sight, a conscientious student like me would have been prepared for the test. But the derailment of business as usual was well underway, having begun that February when I drove with a bunch of friends down to Mardi Gras in New Orleans. Within the first half hour, I was sitting in the lap of a guy I had just met, who would later become my husband. I only lived in New York for another month or so after that, long enough to give notice at work and find someone to take my place in the apartment I shared. My advisor said as long as I returned in May to take the exam, I could finish school by mail.

Working on my thesis manuscript in a tiny second-floor studio on the corner of Royal and Ursulines in New Orleans was a writer’s fantasy. The red brick walls, the ironwork balcony overlooking the courtyard, a pile of bond paper on my desk curling, then beginning to deliquesce, in the humid, flower- and oyster-scented air. Tennessee Williams’ French Quarter apartment was just a few blocks away and his juju swirled around us. In fact, my life, now thoroughly entangled with that of a former professional figure skater who tended bar at a dive off Bourbon Street, featured all the histrionics, melodramatic pronouncements and relationship confusion of a Williams play.

This was so long ago that I composed and retyped my stories and poems on a blue and white Smith Corona electric. After correcting the pages by hand, I paid a professional typist to produce a clean copy for submission.

Returning with “BoyCrazy,” bound in scarlet cardboard covers, I was greeted with a “Welcome back!” by my easy-going, good-humored professor. He ushered me into his windowless office in the English department, where a blue book, a sheet of questions and a couple of Bic pens were laid out on a table. “You ready for this?” he asked. Couldn’t he see how ready I was? Black leather jacket, blue hair, smeared mascara, golden fairy twinkles ricocheting around my head.

The exam question, as best I can reconstruct it, went something like this.
The fundamental question about Virginia Woolf’s “To The Lighthouse” is, of course, why a lighthouse? And why go to it? What is role of the much-discussed, long-awaited journey to the lighthouse in the Ramsay family dynamic, in the tension between Mr. and Mrs. Ramsay? Do not merely summarize the plot.

There was no danger of my merely summarizing the plot as I had no idea what it was. I had not read this book and everything I knew about it was what I had just learned from reading the question – like, the people were named Ramsay. I couldn’t tell from the wording whether they ever actually got to the lighthouse or not. I was screwed.

Or maybe I wasn’t. Maybe there was some way to fake the answer. Why a lighthouse, indeed. Phallic symbol, maybe? Totem of male authority? And the ocean it overlooks – a symbol of fertility or femininity? Hence, the tension in the Ramsay marriage? Can one ever say that one has truly “reached the lighthouse”? I just kept my right hand moving across the paper as best I could. After several epochs, my teacher returned to tell me time was up.

“How’d it go?” he said.
I should have confessed immediately but in the delusion of the moment, I thought there was a possibility he wouldn’t be able to tell I hadn’t read it.

Out of the kindness of their hearts, my professors awarded me the degree of Master of Fine Arts in Creative Writing. As a condition, they made me swear to read “To the Lighthouse.” I promised, but I wouldn’t even own a copy for 34 years.

I went back to New Orleans, to my Tennessee Williams life. It didn’t last long, as we moved to Austin that fall. At that point, I was visited by a long, lingering writer’s block that might have been caused by bad karma and finally ended when I became pregnant with my first child in 1987. Woolfian? I wouldn’t know, because I continued not to read “To The Lighthouse” for decades, busy raising children, entertaining guests, tending to various houses and husbands. The only thing I ever read by Virginia Woolf was an essay called “The Death of the Moth” that was in the anthology I used for the college classes I eventually taught – thanks to that MFA degree of mine.

“To The Lighthouse” would not let me go, cropping up in conversation several times a year. From time to time, someone would suggest that I was a sort of Mrs. Ramsay. This fascinated me but instead of finding out what they meant, revealing that I had not read the book, I would smile enigmatically.

A Mrs. Ramsay smile, perhaps.
A few months ago, a friend of mine started talking about having to fake his way through an oral exam in art history during his studies in Paris, Max Ernst being his Mrs. Ramsay. As I told of my own similar flimflam, now more than three decades old, I decided the time had come to read the damn book. I ordered it from Amazon and read it on the beach during a vacation in Florida, surrounded by my children and their friends.

It turns out Mrs. Ramsay has a raft of children, a boatload of houseguests, a tetchy husband and a funky summer house on a lake in Scotland. In the first part of the book, she is busy trying to make everyone happy, minister to her brood, do a little matchmaking among the houseguests and cope with her killjoy spouse, who says it’s going to rain tomorrow, no way they can take the boat to the lighthouse. Then there are two more sections, which skip ahead precipitously through time and in which surprising events occur. Since the first of these is the death of Mrs. Ramsay, mentioned in one devastating sentence, she is not around to witness the rest. By the time two of her children finally make it to the lighthouse in Part III, they don’t even want to go anymore. It is too late.

But it is not too late for me. For me, Mrs. Ramsay is alive and ready to share her seat at the window. And her sense of how love works in a family. Her easy way of throwing a dinner party for 15. And the implacable possibility of being whisked offstage unexpectedly, leaving them all behind. Having finally read it once, I believe I might read it again. I can’t stop thinking about it.

Isn’t this the great thing about books? It can never be too late. They wait for you. *