WOMEN GUIDING WOMEN ON THE ROAD TO THE TOP

What makes so many strong, successful women especially remarkable? Their willingness to 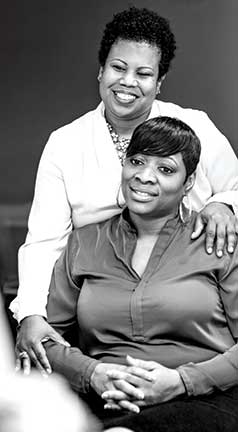 share what they’ve learned by offering guidance and a cheering section to the equally ambitious women coming up behind them. That’s the case with the women profiled here.
Both the mentors (three women flourishing in their chosen fields) and the mentees (three more blazing their own trails) praise their relationships with each other, and all six appreciate the mutual impact these connections have had – and continue to have – on their lives.

JENNIFER RANSAW SMITH & SHERIA SAVAGE
Jennifer Ransaw Smith knows talent when she sees it. And the self-described “fierce” CEO and chief brand strategist of Columbia-based Brand id Strategic Partners, a personal branding firm, saw it right away in hairstylist Sheria Savage, at left, in photo above.

“I think she is one of the most determined people I have ever met,” says Smith, who was introduced to Savage by a co-worker a few years ago. “She has gone through some major obstacles personally and professionally and always lands with both feet solidly on the ground.”

Those obstacles included the sudden death of her beloved sister, serious health challenges and the realization that she needed to be there for her nieces, nephew and her own young son.

Impressed by Savage’s grit and spark, Smith, the mother of three, soon began mentoring the ambitious stylist, advising her when to dive into her business plan and when to slow down.

“From the beginning, Jennifer listened and offered advice,” recalls Savage. “She asked me what was my vision, we mapped it out, and [she] instantly created solutions to guide me in the right direction. She has a caring heart and a loving spirit.”

Today, Savage’s Headline Hair Salon in Jessup is thriving, and she’s nationally recognized as an expert stylist. The achievement comes as no surprise to Smith.

“Sheria embodies what it means to have dogged determination,” she says of her mentee. “Watching her go for her dream has been enriching. I walk away just as full as she does.” 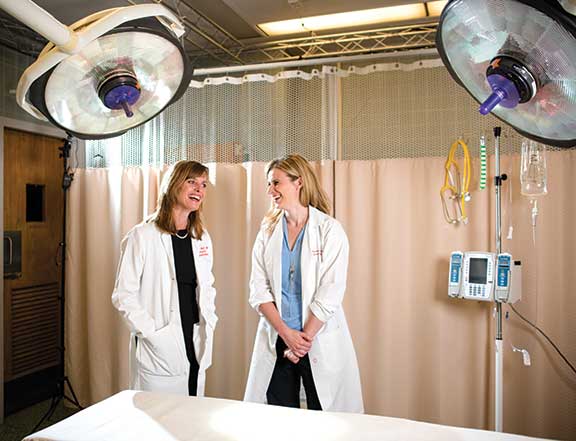 I[first met] Dr. Martin in the operating room, as she scrubbed into a case to assist another attending physician,” recalls surgical resident Emily Reardon, above left. “I was struck by her enthusiasm and clear interest in teaching. I remember her making efforts to teach me all throughout the case and asking me questions about my own interests.”

A thoracic surgeon at the University of Maryland Medical Center in Baltimore, Martin was equally impressed by her initial encounters with Reardon several years ago.

“I was struck by her dedication, diligence, work ethic and the mature way in which she interacted with patients,” recounts Martin, the mother of two young boys. “You can tell she really cares about her patients and the quality of her work.”

In a specialty that has been notoriously inhospitable to women, the younger surgeon (currently a research fellow at NIH) appreciates the elder’s embodiment of the idea that assertiveness and compassion need not be mutually exclusive.

Martin “epitomizes strength and femininity, which makes her unique and a powerful mentor to me,” says Reardon. “She is direct, insightful and intelligent, while remaining warm and approachable.”

Beyond the actual advice Martin gives, adds Reardon, her mentor’s demeanor and approach to medicine have been deeply instructive.
“She’s been a model for how to succeed and stay focused and true to yourself when work can be, at times, all-consuming and stressful,” Reardon says. “She has been a constant source of inspiration and motivation.”

LENORE GELFMAN & JEN TERRASA
As administrative chief judge for the Circuit Court of Howard County, Lenore Gelfman  is already regarded as a distinguished jurist. It’s what she does behind the scenes, though, that 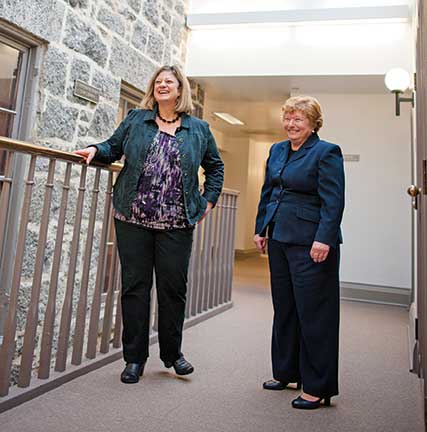 most distinguishes her in the eyes of many in the community, including the Honorable Jen Terrasa.

“She is a tremendous role model and mentor,” says Terrasa, a Howard County councilwoman and mother of three who clerked for the judge in the late 1990s.

“She demands a lot of herself and her law clerks, but always made sure that we got the most out of our clerkships, using everyday experiences in and out of the courtroom to identify teaching and mentoring opportunities for us.”

For her part, Gelfman, recently inducted into the Howard County Women’s Hall of Fame, admires Terrasa’s “conscientiousness, good interpersonal skills and [the fact that she’s] detail-oriented,” all assets that made the young attorney a natural for elected office.

Like many taken under Gelfman’s wing, Terrasa says the lessons she learned from the judge resonate even now.

“I think of her often when making decisions in my role as councilwoman and always do my best to be cognizant of how these decisions, no matter how small, can have a huge impact on people’s lives,” she explains, adding that she cherishes her ongoing bond with the judge.
“Once you are one of Judge Gelfman’s law clerks, you are always one of her law clerks. We are part of a family.”*