When diagnosed with Guillain-Barré syndrome 20 years ago, Debra Mason (not her real name) knew the condition might linger for a while. What she didn’t know was Guillain-Barré — an autoimmune disease often triggered by infection — would still be causing excruciating leg pain and swelling two decades later.

“The only way [my doctors] could stop it was to give me pain meds,” recalls the mother of three from Clarksville. “The problem was that when I took enough medication to stop the pain, I couldn’t function.”

So she did what an estimated 38 percent of U.S. adults have done at least once: She sought an alternative treatment for her ailment. What makes her story — and the stories of other area women like her — unusual is that the condition she hoped to remedy was one widely considered to be under the purview of Western medicine. 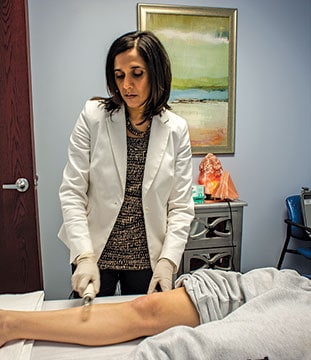 It’s no secret that many alternative therapies have gone mainstream; the stress relieving benefits of massage and meditation, for example, are rarely
disputed. But submitting to uncommon protocols for conditions like Mason’s – for which the standard treatment is rarely disputed – takes nerve, if not suspension of disbelief.

Rao, a physician who has long embraced nontraditional therapies, concedes that the treatment, which delivers light, sound and vibrational energy via wand-like tubes pressed over the body, looks strange. The fact that it works, however, is anything but.

“Our lymph system is our detox system. But we have no current modalities to treat [lymph issues] like swelling,” says Rao. “When your lymph fluid stagnates, it accumulates toxins. LET actually mobilizes the fluid. It’s an amazing tool.”

Translation? While the Western approach was to dull Mason’s pain, the alternative protocol addressed the underlying problem, rendering painkillers unnecessary.

After her first two LET treatments, says Mason, she found herself visiting the restroom with increased frequency. “It eliminated a lot of water,” she says, “so I thought, ‘Maybe something’s happening.'” Her swelling improved noticeably after a few treatments (and her trips to the restroom abated.) “It worked,” she says. “I have less pain.” 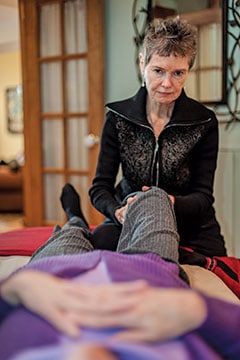 It was unrelenting back discomfort that prompted Marie Cournoyer to explore alternative medicine several years ago. The retired nurse-psychotherapist had already been to an orthopedist and a chiropractor for degenerative disc disease, but neither could provide lasting relief. On the advice of a coworker, the frustrated Elkridge resident decided to give zero balancing (ZB) a try.

“It’s hard to describe,” Cournoyer says of ZB. “You lie on your back, fully clothed, while a practitioner applies pressure to your bones. It’s ‘energy medicine’ that focuses on your body as a whole.”

She acknowledges that ZB isn’t a magic bullet; nonetheless, it has made her back feel much better. Surprisingly, it’s also quieted her irritable bowel syndrome, a disorder notoriously hard to treat and one for which multiple trips to the doctor had yielded no improvement.

“Western medicine doesn’t do much for chronic conditions,” says Cournoyer. “But zero balancing really helps. I’ve actually gone into [a session] in pain, and it was relieved on the table.”

Sherrie Black, a certified ZB practitioner who treats Cournoyer at East-West Healing Arts in Crownsville, explains that “when I do zero balancing, I’m allowing the body to free the energy that’s already stored there. It’s like a sailboat: When the sail is in the right position, the boat goes forward. So we balance energy – the wind – with the body’s structures – the sail – to move through life more smoothly.”

Black adds that it’s fine to be skeptical of ZB, but urges people to try it anyway. “If you don’t,” she says, “you won’t know what it can do for you.” 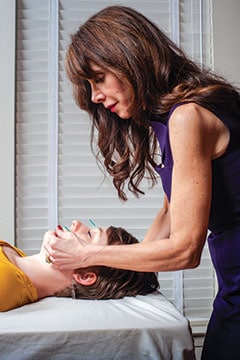 Carol Atkinson knew exactly what the synthetic filler Restylane could do for her: smooth the lines around her eyes and mouth. Yet after years of undergoing the well-known treatment, the Ellicott City resident had an “aha” moment.

“Everything else in my health care regimen is natural, and it seemed kind of counter to be using something artificial in my face.” So the nonprofit sector professional sought an alternative that would bring tangible results without the use of injected chemicals or a surgeon’s scalpel.

She found it in the facial rejuvenation treatments offered by licensed acupuncturist Michelle Gellis. “Since I’ve been going to Michelle, I’ve stopped using fillers altogether,” says Atkinson. “I don’t need to.”

Facial rejuvenation “is a highly, highly specialized field,” says Fulton-based Gellis, one of the few acupuncturists in the country certified to teach the technique. During treatments, “I use needles to stimulate collagen, stimulate the muscles and stimulate the energy to the face without any cutting or disfiguring.”

At around treatment four to six, “clients are astounded” with the results, says Gellis, though the timeline of results depends on the severity of skin damage a patient begins with.

Atkinson noticed a difference after a couple months. The painless, relaxing sessions, she says, “help me go into my la-la space.” Gellis inserts acupuncture needles into her client’s face, under her ears and in the hands and feet.” When Gellis places a needle in her chest, Atkinson says, “I’m down for the count.”

Atkinson says she is thrilled that when people try to guess her age, “they guess really low.”

Gellis wishes such treatments weren’t considered “alternative.” She describes her practice as “complementary medicine” that should go hand-in-hand with Western approaches.

In other words, according to Gellis and other practitioners of “alternative” medicine, there’s no reason to abandon one school of thought in favor of another. Most advocate trying different approaches, even for conditions that are usually dealt with by conventional means. When Debra Mason tried LET for her debilitating leg pain, she became a convert.

And there’s no way the relief was in her head. “It can’t be,” she laughs, “because I didn’t believe in it when I went in!”*

Should you be nervous about mentioning alternative medicine to your health care provider? No, says Dr. Jyothi Rao of Shakthi Health & Wellness Center. “Patients should feel comfortable discussing anything with their doctor,” says the Mount Airy-based physician. “They should be able to bring up whatever they’re interested in.”

Rao has long been a proponent of nontraditional therapies. “I don’t even think of them as ‘alternative’ or ‘complementary.’ They’re true medicine,” she says. Decades ago, she recalls, colleagues would chastise patients for asking about something as innocuous as fish oil supplements. Today, she explains, physicians aren’t dismissive of nontraditional therapies, but they’re not always familiar with them.

It’s tough to learn about a particular treatment from your doctor if he or she has never heard of it, she points out. Rao encourages patients to do some research and then bring the findings to their physician. To start, she suggests visiting the following websites for unbiased information about various therapies:

n American Academy of Medical Acupuncture (medicalacupuncture. org). This site provides extensive information on medical acupuncture, as well as a database of physicians who incorporate it into their practices.

n American Academy of Anti-Aging Medicine (worldhealth.net). This nonprofit is “dedicated to the advancement of technology to detect, prevent and treat aging-related disease.”

At her practice in Marriottsville, Dr. Christine Mitchell uses her hands to diagnose and treat patients, working with the muscles in the body to relieve restriction, increase blood flow and improve overall health. A traditionally trained, board certified physician, Mitchell is also an osteopath. The main difference between a doctor of osteopathy (D.O.) and an M.D. is a philosophical one: While an M.D. focuses on treating illness, a D.O. works to maintain wellness.

“We see the patient as a human being,” not as a collection of symptoms, says Mitchell, adding that new patients often come in expecting a quick fix, a Band-Aid in pill form, and are surprised when they don’t get one.

“So much goes on with healing,” she adds, explaining why she doesn’t just reach for the prescription pad when a patient walks through the door. “There could be many reasons why someone is not healing.”

This focus on healing is shared by a number of other health care providers in Howard County, many of whom use complementary treatments — meant to augment, not replace, Western protocols — in their practices. At Integrative Family Medicine in Columbia, for instance, Jennifer Rabenhorst, an M.D., incorporates acupuncture, herbal nutrition and other modalities when treating patients with conditions as specific as diabetes and as vague as fatigue.

The fact that these types of offerings are going mainstream is no surprise to Mitchell, the osteopath. “Functional medicine — alternative medicine — is booming,” she says. “The public is crying for a different form of medicine.”*