CRANK UP THE GRILL FOR A WINTER BARBECUE

Most people think of barbecue as a summer delicacy. But in the dead of winter, its smoky flavors and aromas bring back lazy backyard afternoons. Moreover the fatty meats and rich flavors of barbecue 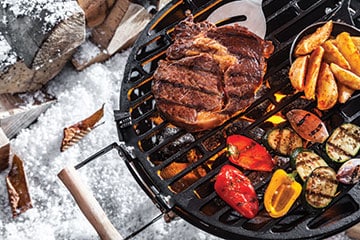 make it a perfect winter food. This savory summer treat in November is like Christmas in July, only the other way around. So while everybody else was scrambling for the latest turkey recipes, I went down to D.C. and begged my friend Jim Shahin to stoke up his Weber and share his mystic knowledge.

Twenty-five years ago, when we were both writers for the “Austin Chronicle” in Texas, Jim and his wife, Jessica, came in to my life. They had a 3-year-old son named Sam; my husband, Tony, and I had two boys about the same age. Soon after, my husband died. Since then, the Shahins have been my family, and second parents to my boys.

Of course this resulted in the mingling of familial customs. The Winiks became Dallas Cowboys fans. The Shahins learned to unwind poolside. My macrobiotic coleslaw with watercress and umeboshi vinegar became a standard accompaniment to the brisket, sausage and ribs Jim was constantly pulling off his smoker.

Back then, Jim was already well into the lifelong devotion to barbecue that has resulted in his anointment as an international authority on the subject. He’s interviewed just about every living pit master and is asked to judge all manner of contests. He’s written on barbecue for “Texas Monthly,” “GQ,” “Southern Living” and, for the past six years, “The Washington Post,” where his Smoke Signals column appears monthly, featuring recipes for everything from grilled salad to grilled blueberry pie. 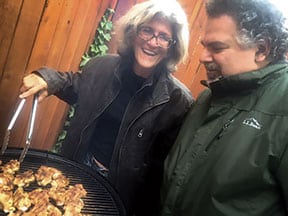 I wouldn’t be surprised at this point to learn that he grills his toothpaste.

The day of my barbecue intensive, I asked if we could also make his fantastic potato salad. It is utterly different from the mayo-based version, which I don’t like at all. Jim’s potato salad, on the other hand, I could live on. I also wanted a lesson on chicken wings so I could impress my boys when they come to visit. We created these dishes on a fancy kettle grill in Jim’s backyard, but he assured me they could be made on my hibachi.

“What kind of barbecue sauce will we use?” I asked.

Jim got a stern look on his face and explained a few things.

Barbecue is not a sauce. It is a cooking technique that entered the American repertoire when early Spanish explorers in Hispaniola (today’s Haiti/ Dominican Republic) observed the Taino Indians cooking food on a raised platform of green sticks, used for the indirect smoking of foods. The Spanish heard the word for the platform, roughly, as barbacoa, which was later anglicized to barbecue.

Barbecue sauce is a condiment that plays a different role in different regional variations. In Texas, beef brisket is smoked with salt and pepper, and that’s it – a sauce may be served on the side. In North Carolina, sauce is typically sprinkled onto chopped pork just before serving; it is a thin vinegar-pepper sauce in the eastern part of the state, with ketchup or tomatoes added in the western part. In Kansas City and Memphis, sauce is frequently slathered onto ribs (In Memphis, this is known as “wet,” while the “dry” style is ribs rubbed with spices before smoking.). The sauce is generally tomato-based and runs the gamut from sweet to super-hot. South Carolinian barbecue fans crave mustard sauce, which is usually mixed into the pulled pork.

Sauce wasn’t part of the recipes that Jim and I used that day, though my host pulled out a selection to sample with the wings. Though gas grills are easier in the wintertime, Jim feels charcoal and wood are vastly superior for flavor and warns that extra time and extra fuel are usually necessary in the cold weather.

We cooked the potatoes in a metal basket that kept them from falling into the coals and made it easy to stir and turn them so they could roast evenly. Once we pulled them off, we set them aside and put on the prepared chicken wings. As the chicken grilled, we prepared the potato salad and threw together a facsimile of my standby cole slaw.

We stopped short of donning our bathing suits, but served with cold beer, this meal felt like July, which was just what I wanted.*

This potato salad is a refreshing and light alternative to the standard mayo-based version. It goes 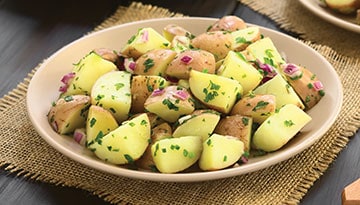 especially well with rich meats, like barbecue. The recipe calls for baby white or gold potatoes, but for color, you can also use red-skinned, or a mix. You can parboil the potatoes the day before and refrigerate in a sealed container. You can even make the entire salad the day before to allow the seasonings to meld.
Serves 4-6 as a side dish
Ingredients:
❑ 1 ½-2 pounds baby white or gold potatoes, skin on
❑ 1 lemon, juiced
❑ ¼ cup extra-virgin olive oil
❑ small bunch mint, coarsely chopped
❑ 3/4 teaspoon kosher salt, plus another ½ teaspoon
❑ ½ teaspoon freshly cracked black pepper
❑ ½ teaspoon dried hot red pepper flakes

Instructions:
Boil the potatoes in salted water until just tender, about five minutes. Plunge them into a bowl of ice water for two minutes to stop them from cooking. Drain in a colander and set aside.
Use grill as prepared for chicken wings (See recipe at right.), placing the lid on the grill with top vents open halfway.
Dry the potatoes and quarter them or cut into bite-size pieces; place in a large bowl and drizzle with olive oil and sprinkle with salt. Toss well to make sure the oil is distributed and place over the fire and stir the potatoes occasionally until they are blistered and a little charred, about five minutes. Move basket to the cold side of the grill and close grill lid, keeping the vents halfway open to smoke for about two minutes. (You don’t want to over smoke them.)
Pull the potatoes off the grill and set aside. In a large bowl, pour the lemon juice and the remaining ½ teaspoon salt. Add the olive oil. With a whisk, whip vigorously until emulsified. (It’s okay if it doesn’t emulsify.) Add the potatoes, the chopped mint, black pepper and dried hot red pepper. Mix well. Serve

This slaw is a little pungent and goes well with rich meats, like smoked ribs and pork shoulder. It’s 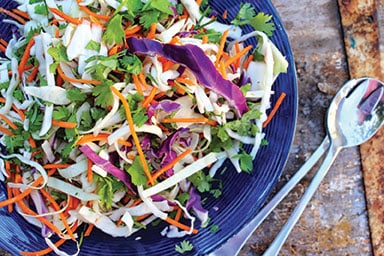 fine at room temperature, but better if chilled for an hour, and best if served after an overnight stay in the fridge. Try it on a pulled or chopped pork sandwich.
Serves 4-6 as a side dish

Instructions:
Mix all ingredients together in a bowl. Pour the dressing onto the slaw. Let sit for at least an hour. Top with chopped roasted peanuts (optional).

These chicken wings are easy to make, especially if you have the rub on hand (although it only takes 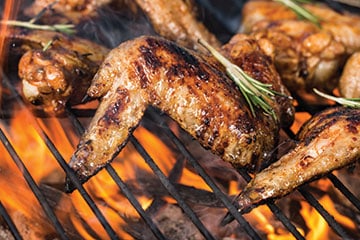 Instructions:
Combine all dry ingredients and mix well. Aggressively coat the wings with the spice rub and set aside.
Prepare the grill for indirect heat (fire on one side). The bottom vents should be open fully. Light the charcoal; when the briquettes are just ashen, distribute them on one side of the grill for indirect heat. For a medium-hot fire, you should be able to hold your hand 6 inches above the coals for 4 or 5 seconds. Place the wood chunks on the coals, on the far side of the bed of coals.
Using long-handled tongs, dip a balled-up sheet of paper towel in vegetable oil and grease the cooking grate. Next, use the tongs to place wings onto the grate. Grill until lightly blackened, about 5 minutes, then turn over and repeat. Move the wings to the cold side of the grill, replace the grill lid and smoke for about 15-20 minutes. Taste for doneness. If they’re not cooked through, check again in another five minutes, careful not to let them dry out. Serve with Alabama white sauce.

For firewood: two hardwood chunks, such as apple or cherry for sweetness or woods such as oak, hickory and pecan for a deep flavor. Or use a mix.