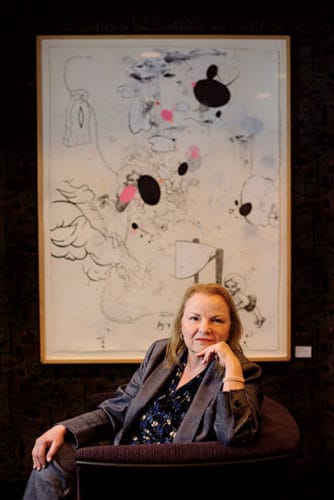 Theresa Colvin combines her love of art with her business acumen

Q: How did you become interested in the arts?

I grew up in Philadelphia and come from a large family. My dad used to take us every Sunday to the Philadelphia Museum of Art. I loved that because I was able to go off and explore art on my own. In high school I got involved with glee club and musical theater and started performing. I was the ingenue, my first role was Kim MacAfee in Bye Bye Birdie.  I was expected to go to business school so I went to LaSalle University. I worked full time and went to night school. After I graduated, things were going well; I liked the corporate structure.

Q: So your business background transitioned to arts administration?

When my mother died, she left each of us a little bit of money and I wanted to do something meaningful with it. I thought, well, what do I really want to do? What do I care about and what brings me the most joy? The arts made me feel most alive. There was an arts administration program at Drexel University—they offered me a fellowship.

Q: When you initially went to college, were you afraid a career in the arts wouldn’t be lucrative?

I didn’t have enough faith in myself to believe I could make it as a performer. I’d done a lot of research on what it would take and I realized that I’m built to want stability. That’s why I chose arts administration.

I was not a risk taker. I was more methodical and analytical. When I was getting my masters, I had internships. I was working at theater companies, which was my first love. I moved to Maryland in 1991 because I had been cast in a show at Burn Brae dinner theater in Burtonsville.

Q: What was the role?

Ado Annie (in Oklahoma!)—of course. Can’t say no. It was a great experience. I lived with friends who still live in Howard County. We lived in a town house in Owen Brown, and we did shows together. I met someone at the theater and got married and decided to stay in Howard County; we bought our first town house in Columbia. Both of our girls were born at Howard County General and have gone through the school system.

Q: What are you most proud of in your career?

I’ve been fortunate. When I worked at the Howard County Arts Council, I learned what community-based work can mean to young people. We received a grant from the National Endowment for the Arts. This was the mid-90s and we were one of the smallest communities at that time to ever have received an award. We’d been competing against Atlanta, Houston and all these cities, and here we were Ellicott City, Maryland. We put artists-in-residence in schools for an extended period and the projects that came out were quite powerful. One was an intergenerational project; we had 10-year-olds talking about what they thought life was going to be like when they were in their 60s. They worked with seniors, who talked about what life was like when they were 10.

Q: The arts are good for our health and well-being, right?

In the last 10-15 years, the research is unassailable. One program the NEA has spearheaded works with veterans, particularly those with traumatic brain injury and PTSD, having them go through art therapy. It’s not just for them but for their family members. The work has had a dramatic impact when it comes to relieving pain, anxiety and depression.

Q: The studies about the physiological benefits are probably a strong selling point.

Q: Many arts institutions are rethinking the way they curate and present their collections in order to acknowledge a wider range of artists. How does that affect what you do?

Equity, diversity and inclusion—I don’t know one arts organization I’ve come in contact with in the last several years that isn’t considering those issues. As funders we have a responsibility to really look at those gates we’ve put up in the past.

Q: That requires almost relearning what we think of as art history.

We work very hard to appoint representatives from across a broad spectrum. Some are trained formally, some not. One of the other things I’m most proud of was work we did at the Maryland State Arts Council to identify and celebrate traditions that are passed down. For example, an iron maker, G. Krug & Sons Ironworks. It’s still all handmade. There’s the decoy carver on the Eastern Shore; screen painting, the tradition in Baltimore. There’s also food—the Smith Island cake, for example, this multilayered cake.

Q: You consider that art?

Yes, it’s a foodway, it’s passed on through an oral tradition from one generation to the next. It came out of a community. Art can be foodways, it’s occupational, it’s material culture, it could be storytelling. Some of the watermen and the stories they tell … these are things we tried to put a spotlight on at the State Arts Council. Maryland is one of the most diverse states in the country. We have people from all over the world, and these are community expressions that have just as much value as any other type of art you might be familiar with. When you represent that to people, they’re like, ‘Alright, I see that your definition of art is expansive.’ One thing I’ve always said is err on the side of inclusion rather than exclusion.