Are You My Child?

FOR EGG DONORS, THE POSSIBILITIES ARE EVERYWHERE

It’s a common question, one that’s usually asked as soon as I mention I’m a mother: How many children do you have? For the sake of simplicity, I say I have three. But I wouldn’t go to the mat with that answer because the truth is, I’m not exactly sure. And while a tedious man might say, with a 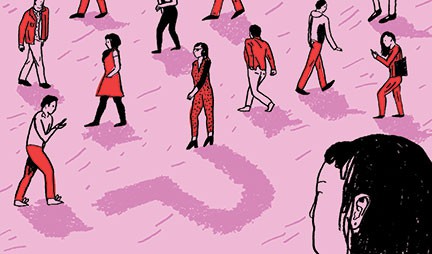 lecherous wink, “I don’t know,” the same answer from a woman comes off a bit strange.

More than 20 years ago I donated my eggs a couple times out of sheer pragmatism. I was in my 20s, living in New York and working at a nonprofit run by the National Organization for Women – that should be enough to indicate my financial distress at the time. By “donated,” of course, I mean “sold.” And when I say “a couple times,” I mean that at least 20 precious packets of DNA were extracted from my ovaries.

I don’t keep this fact a secret. As far as I’m concerned, secrets are toxic. With the exception of temporary covert operations like surprise parties and pregnancies, even secrets that seem harmless fester, eventually turning septic. If knowledge is power, then secrets are an abuse of power.

I have no interest in abusing power, and I’m all about open access. I’ll talk about my egg donation to anyone willing to listen. The problem is, with this particular situation, open access is a two-way street, and one of lanes is completely barricaded.

The first time I donated was in response to an ad in my alma mater’s newspaper. A married couple was looking to buy the genetic material of a Columbia grad, hoping, I suppose, that their child would be, if nothing else, intelligent. I met them at Tom’s Restaurant of Seinfeld fame and was surprised by how old they seemed. Like, ancient. They were, of course, younger at the time than I am now, probably in their early 40s. It was a second marriage for both of them, and they had children from their first marriages but wanted to have one together. I thought that was sweet.

They liked the idea of my eggs because I looked like them. They were Jewish. I’m Italian-Irish but look more Italian. As far as phenotype was concerned, it was a good match. They grilled me about my medical history, checking diseases off a list. “Heart disease in the family?” “No.” “Cancer?” “No.” “No cancer at all?” “No.” My lack of family diseases sealed the deal. I was their girl.

They paid me $2,000, which at the time, the 1990s, seemed enormous. I was making $17,000 a year in my full-time job and about $1 a word when I got freelance writing jobs. (Twenty years later, donors get paid about $8,000. The wages of writers, of course, have decreased dramatically.) We worked through a fertility clinic in a hospital, which meant that I went through the clinic’s genetic, physical and psychological screenings; signed a boatload of paperwork that assured anonymity, privacy and confidentiality for all parties after the procedure; and began the program.

Twice a day I injected myself in the hip with hormones to bring about high-test fertility. My ovaries went into hyperdrive and I visited the clinic several times a week to have my blood drawn and my ovaries checked with ultrasound. There was a fair amount of physical unpleasantness, mainly cramps and bloating and trouble sleeping, but I was young and hearty.

The best day for egg “retrieval” – it would depend on blood results and what the ultrasound told us, and as it happened, I got the call about my retrieval just as I was about to start a new job. I had to call my new boss on a Sunday and tell her I wouldn’t be able to start the next day after all. I told her why, unable to come up with any lie that would sound better.

I became skilled at giving myself the shots and was a natural blood-giver – the phlebotomists raved over my “pipes” – but I was callow. It didn’t occur to me that one day I might want to know if any babies resulted from the procedure, and that I might want to meet them.

A couple years later, still rather impoverished in the Big Apple, I went through the process again, this time for an anonymous recipient. The privacy and confidentiality agreements were even more rigid this time.

Again, I was cavalier and callow. During some purge, I suppose, I must have thrown away the folder with the paperwork, little that there was, from the fertility clinics. By the time I had the urge to retrace my steps and try to unlock the doors that I had allowed to be locked, it was too late. Not only did I forget the name of the old Jewish couple, I had forgotten the name of the clinic, remembering only that it was in a hospital on the East Side, which is where almost all Manhattan hospitals are. I called and emailed every one of them that had ever operated a fertility clinic and asked for copies of my records, but I was told that they had been destroyed a decade earlier. I was a ghost, and I couldn’t even remember which hospital I was haunting.

Several years ago I signed up to an online service, Donor Sibling Registry, and created a profile in case one of my biological children went there to find his or her bio-mom. So far, nothing.

Why do I want to know, now, after all these years? I’ve asked myself that a lot. After all, if the powers that be want this secret to stay a secret, maybe I shouldn’t try so hard to tell it. But I want to know if my children have half-siblings. Also, there are things I want to tell these children, if they exist, that I know now and didn’t know then. I’d like to tell my daughter, if she exists, what she might expect in pregnancy (lovely the first time) and childbirth (very fast the third time), because I think daughters tend to inherit these things from their mothers. I have a sluggish thyroid and an autoimmune disease. And you know how they say a man can predict his future baldness by looking at his mother’s father? I’d like to tell my son, if he exists, that my father has a full head of hair, barely gray, at age 70.

There’s a children’s book, “Are You My Mother?” in which a baby bird searches for his mother, stopping animals along his journey to ask them that question. Sometimes when I walk on the streets of New York, I find myself looking at dark-haired, olive-skinned 20-somethings, searching for a familiar face. I’ve yet to see anyone so familiar that I have to ask, “Are you my child?” which is probably a good thing.

In the end, this may be a secret I can’t unlock. I entered into it blithely, and now I’m stuck with it. This secret will outlast me and all my children, however many I have.*

Christine Grillo writes about health, parenting, people, and human rights for a range of publications. Her fiction has appeared in The Southern Review, Story Quarterly and other journals. A graduate of the Johns Hopkins Writing Seminars she is a fellow of the Virginia Center for the Creative Arts.