Wondering About the Why 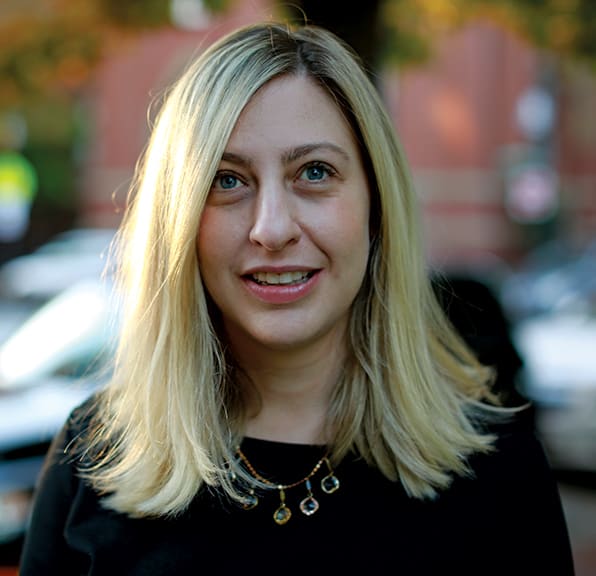 Meredith Goldstein was a reporter at The Boston Globe and suffering a recent breakup when she decided to pitch an advice column, Love Letters, to her editors. Goldstein, 40, recently published a memoir, Can’t Help Myself: Lessons and Confessions from a Modern Advice Columnist. She was raised in Howard County by her mother, Leslie Goldstein, a private piano instructor who died from colorectal cancer in 2013.

In Highland. It’s nice to be able to say Highland—for most people I’d say Columbia. When we moved there I was 5, there was a farm behind me. I went to high school at Atholton—River Hill didn’t exist.

Q | You were raised by a single mom. Did you give her dating advice?

My parents got divorced in stages when I was around 8 to 11, I don’t even remember when the divorce even became final. My mother had primary custody and was living in the suburbs and there was no Internet, so she had a slow start. At that point you’re being set up by people or getting asked out randomly—you can’t jump on match dot com.

Q | Did your mother influence the way you give advice?

She did this thing where, because she wasn’t someone who was good at quick expression, in the moment of confrontation she would freeze. It’s funny because she had two daughters who often spoke before thinking. She was much more thoughtful. Sometimes I’d find little pieces of paper around the house with things she wanted to say. Sometimes it was about professional, sometimes personal. Sometimes she would test them out on me. This has affected the way I give advice; often I tell people to try it out, talk to a mirror or write it down first. We learned from each other. I would edit her copy and she would really teach me that she had to be thoughtful about it.

Q | It must have been tough to lose her.

She was a piano teacher; I can’t tell you how many people she taught. There’s a chapter in the book about how she really didn’t want her students to know she was sick. She told them she was retiring, which was weird and abrupt. People in Maryland think she disappeared and ditched them. She’d taught these kids for years, some from age 7 till they were 17. A lot of them went on to play professionally. At the time of her death, I didn’t feel that it was my responsibility to tell all her piano students, but I did feel it was my responsibility to tell certain ones.

So, after she died, we had a hippy memorial service in this beautiful bed and breakfast in Jamaica Plain (a suburb of Boston). Some of her piano students flew in to play. Slowly over the years, other piano students—some are my age or older—have emerged. It’s been incredible to see—they’re all over. One of the reasons I wanted to do a reading in Howard County was this book tells the narrative of why she didn’t want them to know.

Q | She was important to her students.

Sometimes during a lesson, the piano would stop, and I’d hear mumbling. Sometimes I’d hear a 15- or 16-year-old say, like, ‘I don’t want to go to the college my dad wants me to go to,’ or something. When we were packing up to move her to Boston for her treatment I found a note from a student, ‘Thank you for helping me come out to my parents.’ When you teach piano for so many years, you wind up having these intense relationships. My mother was lively and cool and peer-like when it was appropriate.

Q | You and your sister had different personalities.

We have the same type of humor, but she has always had the bravery and energy that I never had.

Q | How is Boston different from the D.C. metro area?

Boston is definitely what you see on movies and TV, and it’s a whole lot more. Guys in Red Sox hats talking like Ben Affleck… When it comes to problems, Boston is actually very similar to Columbia, as there’s this feeling that I might know you, or I can count the degrees of separation; I probably know your family. Even though I still feel a little bit like an outsider. One thing that makes Boston very different is there are so many transient people there for college and grad school. I get a lot of letters from people who have to make decisions based on geography. People make these massive life choices like whether to move in together based on leases and affordability.

Q | Does your Jewish heritage come into play in your advice-giving persona?

It’s not just the matchmaker-Fiddler-on-the-Roof tradition. It’s much more—I was raised pretty secularly with a few holidays thrown in. But I honestly think in Jewish culture, it’s acceptable and recommended to have a dialogue about the “Why” of things. This is why Passover in my family’s house takes a million hours.

Q | How is advice changing in the wake of #metoo—not just in terms of assumptions about gender, but also in terms  of the kind of advice people are seeking?

It’s changing slowly. I think we need to subject ourselves to fewer rules about women do this, men do that, and allow ourselves more opportunities. We can tell ourselves, I don’t have to do any of these things, and instead just ask, ‘How can I navigate this?’

Q | Are you checking your assumptions and the advice you proffer more closely?

In the book, I talk about making sure there’s no default setting. I have to ask myself, what is the default I’m picturing about the person and their experience? For example, if I get a letter writer who says I’m a 25-year-old woman and I’m having trouble dating in Boston, what does that mean? Does that mean you are a white woman dating in Boston? If not, guess what, it’s harder. It just is. The Globe recently did a series about race in Boston, which pretty much confirmed what many people already knew. It’s not the easiest place to be a person of color. Also to date in Boston—it’s expensive. I can’t assume anything.

Q | The three of you—you, your sister and your mother—almost appear as archetypes. Your personalities are a triangle and make for a good story.

When it came to our love lives, my mother and sister were more similar. They were very involved daters. It was an expectation that they’d partner up, while I was more like, ‘maybe that will happen to me.’

Q | Where are you with dating now?

Happily single. When I turned 40 I was like, maybe that’s something I could do now.  I finally had room in my brain for dating.

Q | Do you have room in your womb for it?

Definitely not. Never had room in my womb for it. I love children and I love my friends’ children, but I knew from an early age I wasn’t going to have kids. I have a cousin, Tina, who I mention in the book. I’m not supposed to say she was my favorite relative but she is. She had a partner, she had a really nice life and she had space for me. I remember thinking I liked her setup.

Q | She was a relationship mentor for you.

A little bit, she’d love to hear that. She lives in L.A. with her partner of many decades. It showed me I didn’t have to get married and have kids. I think it’s easier at 40 to meet people who already have children, or never wanted children. It’s complicated in your 30s to find someone who won’t have that expectation of you.

Q | Any messages for the women of Howard County?

I hope that my mom’s piano students find the book. The origin of so many good things is Howard County. I have a friend in Boston who is a guidance counselor, she’s from Columbia. There’s a certain level of just getting it. It’s all about sense of place and where you were raised.