We Should All Be Chimamanda

Maryland’s 2017 One Book honoree shares insight on feminism, celebrity and raising a daughter

Chimamanda Ngozi Adichie, the author of three novels along with her nonfiction 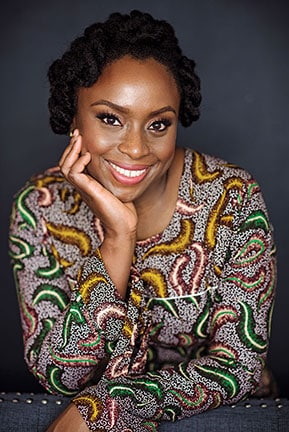 books, “We Should all be Feminists” and “Dear Ijeawele, or a Feminist Manifesto in Fifteen Suggestions.” She was born and raised in Nigeria and came to the U.S. to study at Eastern Connecticut State University. She went on to study writing at Johns Hopkins, hold a fellowships at Princeton and Harvard and receive a master’s in African Studies at Yale. She is the recipient of a MacArthur genius grant, and her book “Americanah” won the National Book Critics Circle Award and was recognized as one of the “New York Times’” “Ten Best Books of 2013.” Her 2003 book “Purple Hibiscus,” has been chosen as the Maryland Humanities One Book for 2017.  Adichie lives in Ellicott City with her husband, a doctor and assistant professor of Family Medicine at the University of Maryland Medical School, and their young daughter. She also spends time in Nigeria.

Q What brought you to Howard County?
I always knew I would have two homes. I didn’t want to be part of the writerly noise of New York. The man who was to become my husband lived in Maryland. The first time I came to visit, I remember noting how diverse the neighborhood was. On the street where we live, the Indian woman, the Chinese woman, the Arab family. I thought, this is perfect.

Q Do people recognize you around town?
I should preface it by saying it’s a good problem to have. It’s easy to whine, “Oh lord I miss my anonymity.” I say this in the spirit of ridiculous gratitude: Recently I was telling my family I no longer like to go to the mall on the weekends. I want to have the right to be all shlumpy in my pajamas and not be recognized by some excited young person who wants to photograph me.

Q You’ll be 40 in September. Do you see that as a milestone?
As I get older, I get more confident than ever before. I’ve become a person that doesn’t give a f*ck about people approving of me, in a way that I did when I was 20. It’s my damn space.

Q Yet everyone wants to be young.
I think that this culture is ridiculously youth-obsessed in a way that isn’t helpful for people in their youth. It kind of amuses me. You think of that saying by Oscar Wilde that youth is wasted on the young. When you were young you might have been physically firmer, but mentally you were messed up. That’s what we’re aspiring to? 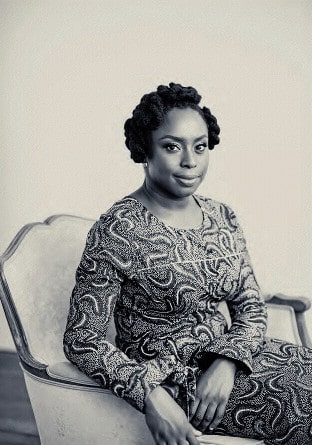 Q Young women are in the room to be pretty. Young men are there to have ideas and innovate.
Everything negative about society affects women more. It’s a consequence of living in a world that is male power dominated. In Nigeria, in sub-Saharan Africa, it’s still a culture that reveres age, a culture in which being old you automatically deserve a certain respect. Here, there’s almost a sense of disdain, being that older person is someone who just gets in the way. In Nigeria it’s different; from small things, like standing in line, you see people scrambling to let the older person go ahead, or everyone comes to greet him or her.

Q What was your life like growing up in Nigeria?
I grew up in Nsukka, a university town. It was very happy, very safe childhood. I wish I had recognized how happy it was. I miss my childhood. My parents are really lovely people if I may say so myself. My father’s 85 and I’m very much a daddy’s girl. He’s a brilliant professor of statistics, but there’s a fundamental simplicity in his nature that I find very moving. He’s a person whose first instinct is to see the good in people, to believe in people. He lets people be in their own space—though lately I’ve been thinking about how gendered this is as well.

Q Did he make space for you to be a feminist?
For an Igbo man born in 1932, he is unusual, but even so, his perception is what I like to call Feminism Lite. We were having a conversation recently and he said to me, “Of course men and women are kind of equal but the man is the head of the family. The man has a responsibility to treat the woman well.” Which I deeply disagree with.

Q “A Feminist Manifesto” was written before your daughter was born. Would you rewrite it?
I wouldn’t change anything. I need to follow it myself.

Q Raising a child goes quickly and it also seems endless.
Before she was born, I was happily selfish and enjoyed it deeply. One of the reasons I wasn’t sure I wanted a child is I am so committed to my writing. A part of me is a bit obsessive and I worried that I wouldn’t do both well. But now that she has happened … Obviously, there is a price to pay in terms of time. But there’s joy to balance that out.

Q I understand feeling torn about your work time.
My mother had six children. An educated, middle-class woman. We had nannies. If she had not worked, I would have found that very strange. She went to work every morning and came back in the afternoon or evening and that was perfectly normal and we were fine. I find that in this country if a woman asks for help with child care, it’s something she has to be ashamed of. And if you talk about child care, you have to make sure to say, “They only go two days a week.” This is a country that tells itself it is progressive, but when it comes to the norms around motherhood, the United States is very backwards.

Q You’ve said you feel gender issues are more pressing than race?
Not more pressing. In my own life, I don’t feel as supported when I point out gender injustice as I do when I point out race injustice. I’m surrounded by people who completely get racism. I’m never asked, do you really think it was race? When it’s gender, there’s always that ever-so-slight pause, the possibility of being questioned, being told to prove it.

Q You’ve also written about how you didn’t even think about race before you came to the U.S.— you weren’t a color.
When I was in Nigeria, I thought of myself in as Igbo and as Christian. Religion is a very strong identity marker in Nigeria. But not race, because everyone is mostly the same. What I found troubling when I came here wasn’t that I had become black, but I realized that this black meant so many negative things.
I remember thinking, surely these people don’t think I’m less than? I had this fleeting moment in undergrad, it was the first essay we’d written for the class, and my professor says, “Who is this?” And he calls my name because it was the best essay. I raised my hand and he looks ever so slightly surprised. It was a very small moment, but I saw it. I remember thinking, he’s surprised because he didn’t think that the person who wrote it was black.

Q I understand that you don’t like to talk about what you are working on.
I’m superstitious. You never know. You’re working on something, and it could become something else.

Q Do your characters come to life? Do they lead you?
Yes, it’s the most magical thing about writing fiction. It’s an unconscious thing I can’t explain.

Q By the way, I love your dress.
My nieces are managing an Instagram page to highlight different Nigerian fashion designers.  If you go into a store in the U.S., every damn thing is sleeveless. I read somewhere that it’s cheaper to make things sleeveless because arms are hard to fit.

Q Are sleeves about modesty?
Not for Nigerian women—it’s not modesty. They have sleeves and then this big cutout at the back. It’s just more attractive.* 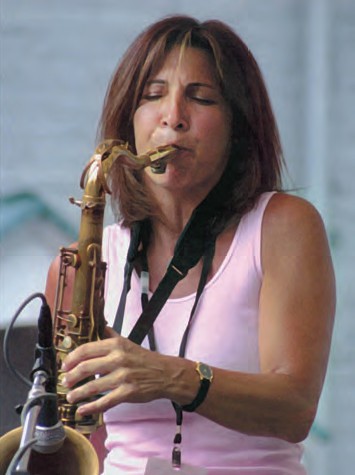