THE BUSINESS OF ART

ParrSong Studio and Design was born of necessity. In 2011, after 25 years as a visual arts teacher at Baltimore School for the Arts, Kim Parr Roenigk 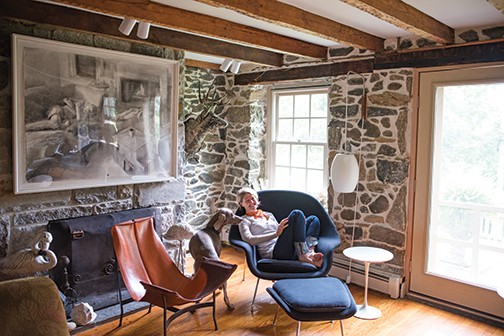 found herself suddenly unemployed in a faltering economy. Caught by surprise, she had to think fast. She returned to adjunct teaching but found the pay lacking.

Roenigk (who remarried in 2009 and retains Parr for professional purposes) began talking with her friend and fellow artist, Youngmi Song Organ. A fine artist whose resume includes numerous exhibitions and prestigious awards, Organ was also the mother of three small children and was looking for a job with flexible hours. Roenigk says Organ’s availability prompted her to “just do it.” Last year, she started her own business with Organ as an employee, and they have not looked back. Roenigk created a business model that allows Organ to keep active creatively, make good money and to have time to raise her children.

The artists can manage just about any client request for creative painting, providing clients with custom decorative art including decorative painting, murals, painted furniture, faux finishes, custom artwork and tromp l’oeil — all made to order. The business is off to a good start and both Roenigk and Organ are thrilled.

ParrSong Studios recently completed multiple paintings for The Ivy Hotel, a restored set of historic buildings that is now an upscale hotel in Baltimore’s Mount Vernon neighborhood. The hotel recently became a member of the prestigious Relais & Chateaux collection, the first to be 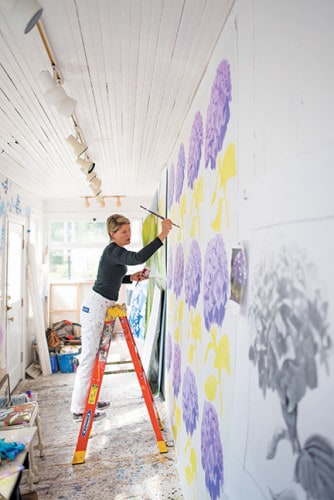 designated in Maryland. There, working with San Francisco-based interior designer Joszi Meskan, Roenigk and Organ created wall murals of joyous flamenco dancers (based on the painting “El Jaleo” by John Singer Sargent); cubist-inspired guitars drift across the walls of a music room. Decorative flourishes appear throughout the hotel, enhancing the The Ivy’s unique artistic vibe. The project, says Roenigk “is a combination of styles. It was really challenging and surprising, something we could have fun with.”

Organ says the pair’s creative process solidified at The Ivy. “Kim is very intense and focused, and works hard to get what she wants,” Organ says. “She is a perfectionist, and I like having to match her drive.” Organ says the two communicate with few words, sometimes without speaking at all. “Kim jokes that I can read her mind,” she says. The work at the elegant hotel (currently in pursuit of the venerated Relais & Chateaux designation) proved to the artists that they could work seamlessly together.

ParrSong Studio and Design is located on Main Street in the heart of historic Ellicott City. The bright, white painted studio is a converted porch, about six feet wide and thirty feet long with a long back wall. The front and side are all windows, providing ample sunlight. On the wall are canvases of repeating rows of large stenciled images of a single colorful hydrangea flower in various stages of completion. They are for a client and will eventually become wallpaper. The work may have a kinship to Andy Warhol’s famous silkscreen wallpaper of repeated flowers, but Roenigk dismisses the notion. She views the business’s work — no matter how creative — as commercial. While she and Organ trained as fine artists, their business work is designed to fulfill the client’s desires, not the studio’s artistic longings. Roenigk’s fine art is landscape painting that she does on her own time. Even so, to the outsider this distinction may be a bit blurred.

The 56-year-old Roenigk grew up in Baltimore County and has lived within a 30-minute radius all her life – except for two years away at graduate school. Her serious training as an artist began when she was in her 20s, though she always liked to draw. Roenikg was a full-time mother during the day, with two young children at home when, encouraged by a friend who admired her drawing skills, she enrolled at the Maryland Institute College of 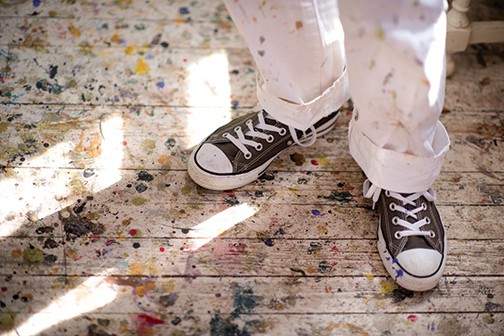 Art (MICA). She was accepted and began taking classes at night, focusing on realist painting. Five years later, in 1984, she completed her Bachelor of Fine Arts degree in painting and began teaching part time at Baltimore School for the Arts (BSA) and as an adjunct professor at Johns Hopkins University and MICA. In 2001 she earned a Masters of Fine Arts degree from Yale University, again with a focus on painting, returning to the BSA to teach full time.

Her second marriage in 2009 brought an expanded family of four more children and a more urgent need to balance family life, paid work and solitary hours working on her own paintings. The region where she lives was once surrounded by rolling hills and dense woodlands, but has recently been under development as the suburban sprawl continues throughout the Baltimore- D.C. corridor. A painter influenced by the Hudson River School and the Luminists — both 19th century groups of realist landscape painters who found divinity in nature — Roenigk brings a spiritual dimension to the landscapes she paints.

She often heads out in her pickup truck to paint on site. Currently using clear Mylar sheets and oils, she documents the changes to the landscape she loves. Her work takes on a time lapse quality as she revisits sites under construction, repeatedly painting the same areas as they undergo change. When the works are completed she displays them with areas overlapping to form a large fragmented picture of a particular site, resulting in a disjointed cinematic view of the savaged location.
Roenigk’s paintings, with their clean vibrant colors, seem to share Edward Hopper’s ability to render beauty and melancholy simultaneously. The artist acknowledges the connection, recalling her initial reaction to Hopper. “I first saw his work when an instructor showed a slide in class,” she says. At 20 years of age, she says, “I recognized that is how I see.” While Hopper’s paintings often include people, Roenigk’s are all landscape, without figures.

She describes her work as “realist paintings that celebrate the American landscape, but are more about its disappointments.” The buildings and the 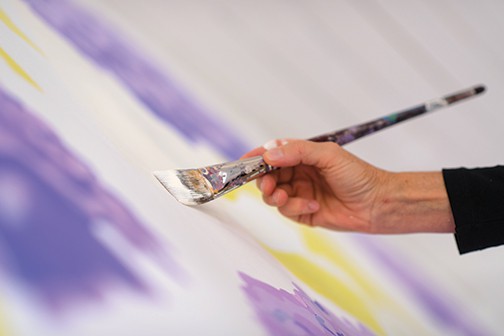 land she documents speak for themselves, describing the conflict between changes brought on by development and a disappearing ecosystem. Roenigk has been painting plein air landscapes for more than 15 years and loves to create emotion through the ever-changing light and color.

In the early days, her painting was figurative, often with her young children as subjects. Roenigk’s paintings on paper have been widely exhibited over the years; recent exhibitions include the Jane Deering Gallery in Santa Barbara, Calif., and the Hilyer Art Space in Washington, D.C. Plans are underway for a solo show of her Mylar paintings in MICA’s Rosenberg Gallery next fall.

Roenigk scrambled to remake her life after losing her job of 25 years, but rebounded by launching a successful business. “So far so good,” says the artist. She and Organ, she says, “can be our own boss, we get to use our skills, we dig into art history, we get to make creative decisions.” And she’s pleased that she can pay Organ and any other needed assistants “a real wage — not minimum.” On top of it all, Roenikg adds with an emphatic laugh, “We enjoy each other’s company.” So far, the company has done no marketing; all the commissions have come through word of mouth. Roenikg hopes to continue expanding the client base to larger institutions – including hotels, restaurants and hospitals— challenging jobs include plenty of creative collaboration. And because the work can be produced on canvas and shipped to the site for installation, Roenikg hopes to expand geographically as well.

In the meantime the artist is pleased that her business allows her to pursue her personal work, giving her time to spend alone, expressing her feelings about her surroundings and the changes to the region she knows and loves. *