THE ART OF COLLECTING

It was a trip to Napa 11 years ago that gave Kirsten Coombs and her husband, Luke, a taste for fine wine.
After savoring the California cabernets, Syrahs and zinfandels, the Columbia couple knew they had to ship some of the good stuff home. They joined several wine clubs and started receiving four to six bottles of wine every couple of months. But they learned enough about good wine to know that storing it in their basement through the sticky summer months was not ideal. 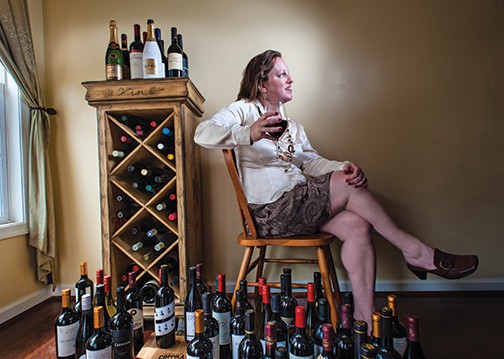 “I was getting these premium wines and worried about the health of them,” Coombs says. “We had a couple hundred bottles and were now running out of space. There’s an investment of a lot of money to keep these wine bottles.”

The couple now store about $10,000 worth of wine in a used wine refrigerator they purchased from Iron Bridge Wine Co. Their wines are now kept at a cool 55 degrees.  “It adds drama to entertaining,” says Coombs, who refers to her refrigerator as a “wine cave.” Guests think, “Luke and Kirsten are delving into the cave to find some amazing pairing to the lasagna that they made.” Breaking out a bottle from V. Sattui in Napa or Francis Ford Coppola Winery in Geyserville also brings back memories of the wineries that Coombs can share with family and friends.

Purchasing the wine refrigerator secondhand saved the Coombs thousands of dollars. A new wine fridge that stores 200 to 300 bottles costs between $3,000 and $10,000, according to Louis Hogan, owner of Vintage Cellars of Maryland Inc. The Westminster business owner has served a number of clients in Howard County. He advises clients to think about where in your house you want the unit and how much wine you want to store, including the weight. Depending on the weight, you may need to beef up the joist that supports the floor beneath.

Denise Zuchero was getting tired of the boxes stacked in the basement. “I said, ‘we’ve got to get all these cases put away,'” she recalls. So she and her husband, Dave, built a wine cellar, a series of diamond-shaped bins and display racks to hold 1,000 bottles, though, Dave admits, “there are still about 10 cases on the floor.”

This wine will unlikely gather dust. The couple has frequent parties at which they happily open bottles to pass around to friends and family. But unlike Kirsten and Luke Coombs, these bottles haven’t been shipped from Napa or Languedoc. The Zucheros own Tin Lizzie, a Clarkesville-based business that offers a make your own wine experience. Would-be vintners sign up for groups that meet four times over the course of the year and can choose from a menu of grapes and blends.

Dave grew up in an Italian-American community in suburban Philadelphia where wine making was as common as canning tomatoes. His father bought boxes of wine making grapes at an Italian grocery. So when Dave, a microbiologist, met Denise, a chemist, it only made sense to continue the wine making tradition. They both have day jobs working in the pharmaceutical industry, but since they founded Tin Lizzie Wineworks in 2008, they’ve made a side business of sharing their passion for wine.

Susan Levine and her husband, Matt, also like to entertain. So they built a bar in the basement of their Columbia home two years ago so they could have a social area to hang out with friends.  “It became a focal area for people to gather,” Levine says of the bar.

The Levines, who own Black-Eyed Susan Brewing Co. in Columbia, constructed the bar themselves. It features two beer taps, a wine rack, sink, mini fridge and plenty of cabinet space to store glasses. The pair spent about $4,000 on the oak and granite bar.

“Even though it’s an investment, you’re not going to be selling these to wine shops. We’ve invested money for our future enjoyment,” Coombs says. The couple only buys wines that they like. “Sometimes we’re afraid to go into the wine cave because these are like sacred wines.”
– Julekha Dash

THE ART OF THE MATTER

Joan Bevelaqua is an avid art collector. An artist herself who also teaches art in her studio and at Howard Community College, she has a discerning eye and, certainly, more knowledge than most art collectors.

Bevelaqua buys what she likes. She doesn’t restrict herself to a single medium. She doesn’t think of potential value because, frankly, “most art is not going to end up in Sotheby’s selling for hundreds of millions of dollars,” she says. 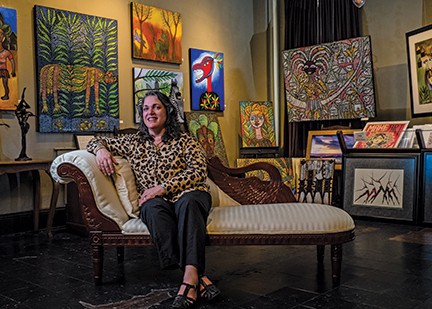 “I buy original works, usually from local artists I know, in print, oil and watercolor,” continues Bevelaqua, a Columbia resident whose studio is in the Howard County Center for the Arts in Ellicott City. “I’m looking for work that appeals to me.”

She is not alone. Collecting art for the home, say the experts, is a matter of personal preference. And there’s no better place to look than Howard County, with what Bevelaqua describes as “a lively arts scene.”

Sara Arditti, owner of Still Life Gallery Fine Art & Custom Framing in Ellicott City, carries original works by local and regional artists. Typically, she encounters two types of customers. “Most have a good idea of what they’re looking for,” she says. “Others fall in love with a work and buy it on the spur of the moment.”

Arditti’s top-selling artist is Ephrem Kouakou, an African whose contemporary acrylic paintings are sought by museum curators. Several of Arditti’s customers collect the artist’s work. But for most, she says, the artist’s reputation is not as important as the piece.

Customers look for a genre, like a landscape or a still life that fits their personality and home, she says. They
aren’t as interested in the medium as in the subject, line and color, although oils and acrylics sell best. Works in Arditti’s gallery range from $100 to $5,000; the average purchase is around $1,200.

Marian Berman, an art consultant for individuals and corporations, has seen two trends in home collecting over the last decade.

The first, says the Woodstock resident and former owner of Gallery 44 in Ellicott City, is a move away from art that requires glass because modern houses, with their many windows, create glare. The second, she says is a backlash against prints with huge runs. “Prints with runs of 50,000, versus a typical run of 3,000 to 5,000 for an inexpensive print, were sold as investment art. Three years later, they’re virtually valueless,” she says.

Buyers often want to combine what they find aesthetically pleasing with potential future value. “Good art has held its value but the question is, who determines ‘good?'” says Berman. “You can look at a $10,000 painting and say, ‘I wouldn’t spend ten bucks on it.

“The bottom line is, art is worth what it’s worth to you,” she says. *

LOOK BEFORE YOU BUY

The Artists’ Gallery, in the American City Building, 10227 Wincopin Circle, Columbia, the only cooperative gallery in Howard County, features work by its 20-plus members.

“We have a mix of media. Shows change monthly,” Diane Dunn says of the gallery, which gets 250 visitors a month.  When you find an artist you like, research. Look them up online to see their body of work and where they’ve been shown. If possible, get in touch with them.
Says Alice Webb, an Ellicott City artist and former president of the Baltimore Watercolor Society, “People think artists are untouchable. But they like to hear from fans. They may invite you to their studio.”

Be aware that “original” has different meanings. People want original art but not all original art is handmade. Marian Berman likes original graphics like silk screens and etchings in numbered, limited editions that are hand-printed but can be machine-made.