When all is said and done, what seemed most amazing about Talbot County is how close it is. I’ve been to the Eastern Shore

several times since moving to Maryland more than a decade ago, but on this trip, the world seemed to magically transform as we crossed the Bay Bridge. A rainy spring melted into blue sky summer with vivid green waves of corn rippling in the sun, farm stands promising succulent peaches along the way. Every so often I reminded myself that we were, incredibly, less than two hours by car from home.

Early European settlers, of course, had traveled much farther from the familiar, and coming up the Chesapeake by boat, they found rich soil for planting tobacco and waters crammed with oysters. Nearly four centuries later, bivalves are a precious commodity, and soybeans, corn and poultry make up the agricultural economy. But history still lives here, beneath the layers. Wood frame Colonial and stately Federal houses share the streetscape with stone churches; there are cobblestone streets, vivid perennial gardens behind picket fences, cluttered book and antique shops with proprietors who know their stuff. Local eateries count on food harvested or foraged from the land and sea, and you can even sip local wine, beer and spirits. It all adds up to an idyllic, attainable getaway – and it’s all just a short drive from Howard County.

EASTON
We started our morning in Easton, Talbot County’s center of commerce and government. We stopped at the bakery owned by the Bartlett Pear Inn across the street, whose chef, Jordan Lloyd, had just returned from cooking at New York’s James Beard House. (If the chef was exhausted from his trip, it wasn’t apparent in our meal that evening; see sidebar.) After coffee (cappuccino for me, iced for my companion, Craig), and a shared scone (crumbly and buttery outside, dense with crunchy pecans inside), we set out to explore. Use your imagination to peel back the layers of history by going on The Hill walk, in Easton’s 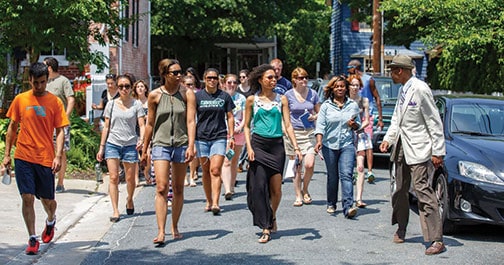 east end, site of an ongoing archaeological project by University of Maryland and Morgan State University students. Markers along the way tell the story of 18th and 19th century residents of what is thought to be the oldest African- American neighborhood in the U.S. Nearby, find the Academy Art Museum, whose dual purpose of exhibition and enlightenment ranges from showing the work of local plein air artists to organizing art classes and bus trips to museums in D.C. We saw works by Paulette Tavormina, whose photographs of insects, flowers and fruit, rich with symbolism against black backdrops, are reminiscent of 17th century Dutch still life paintings. (The museum’s senior curator penned an essay for Tavormina’s lush book, “Seizing Beauty,” published in April.) Just across the street is the Waterfowl Building. Yes, Easton has such a place, and it hosts the annual Waterfowl Festival in November. We saw an exhibition of works by Ruth Starr Rose, a Wisconsin native whose family moved to the Eastern Shore when she was young. After studying art at Vassar, the artist began to use her African-American neighbors as subjects. Her paintings and prints show crab pickers at work, children at play, portraits in vivid color and even biblical allegories. Though both the Tavormina and Rose exhibitions have since closed, what’s important is that yes, you can see amazing art in Easton – at the Academy Art Museum, during the town’s annual Plein Air painting festival, or at any number of local galleries. 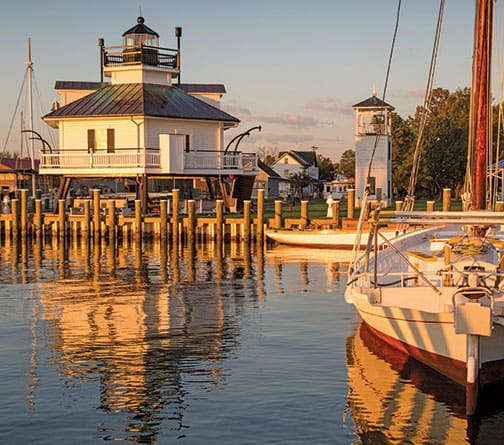 Next stop was Tilghman Island for lunch at the classic Harrison House. There is no better spot to enjoy crab cakes or fried oysters than this family-operated waterfront inn with the motto, No apologies, lots of butter. The restaurant’s back porch faces a working marina, so we watched pleasure and fishing boats come and go, the tide softly lapping at the grassy shore. From here, you can see Dogwood Harbor, home to two skipjacks, the low, single-masted boats once exclusively used for oyster dredging. The Rebecca T. Ruark, built in 1886 and designated a National Historic Landmark in 2003, lives here, and from late May until early November, owner Wade Murphy takes paying guests out twice daily (11 a.m. and 6 p.m.). Come November, Murphy returns her to the real job of harvesting oysters.

ST. MICHAEL’S
Heading back to Oxford, where we planned to spend the night, we stopped in St. Michael’s. The town has the soothing hum of a New England village by the sea, with its gift and craft shops and art galleries, where a neighbor’s screen door gives a creaky thwap as it falls shut, a yellow lab slurps water from a dish proffered by a local shopkeeper. And if watching that dog makes you thirsty, St. Michael’s has you covered. The town has its own winery, brewery and distillery, and all offer tastings (see box). St. Michael’s is also home to the Chesapeake Bay Maritime Museum, 12 buildings and a 1879 lighthouse rich with stories of the Chesapeake Bay.

OXFORD
We had booked a room at the Sandaway Waterfront Lodging Bed and Breakfast. Another family-operated business, the Sandaway is adjacent to where the town’s main thoroughfare, Morris Street, winds up at the Oxford-Bellevue Ferry. The inn has a range of different rooms; try to get one facing the water, with a porch where you can enjoy morning coffee and the satisfying breakfast treats delivered in a basket to your door. A wide lawn slopes down to a sandy beach with pairs of Adirondack chairs strategically placed in sunlight and in the shade of the property’s grand trees. On a sunny day, you might want to just plop yourself in a chair and pretend that you are far, far from home. 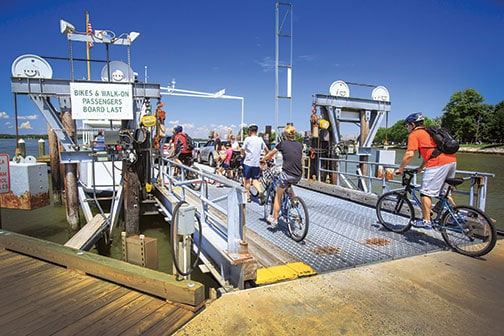 With its straight, flat roads, Talbot County is perfect for both hardcore and placid cyclists. You can set your own pace through shady tree-lined roads, along open fields, beside the water and into picturesque villages. You’ll want to incorporate the Oxford-Bellevue Ferry (pictured at right) into your bike ride. For a leisurely expedition with plenty of rewards along the way, ride from Easton to Bellevue, crossing the Tred Avon by ferry to Oxford for lunch at the Robert Morris Inn. Next, browse in the Mystery Loves Company bookshop and Americana Antiques across the street (if you catch the shop when it’s open). While it specializes in mysteries, the bookshop has plenty of contemporary literary fiction, history and Eastern Shore titles. Take your book to the Oxford Town Park and recharge on a bench facing the water before pedaling back to Easton. The round-trip ride is just 22 miles. If you don’t have your own bike, try Easton Cycle and Sport or Shore Pedal and Paddle in St. Michaels.

BARTLETT PEAR EASTON
Choosing the tasting menu over the a la carte offerings at the Bartlett Pear Inn must be the consensus of the entire table. For us, the only discussion was whether to go with the five or seven courses (We chose five), or whether or not to opt for the wine pairings (I went solo; Craig is a beer drinker). Each dish was inspired and satisfying, the chef clearly using Eastern Shore bounty as a starting point for his creations. We started with a creamy radish soup the color of a coy bridesmaid’s nail polish, with a garnish of pickled red onion. A wedge salad with braised pork belly, dressed with bleu cheese from Chapel Country Creamery, was paired with a lovely, crisp, Chateau Vignal Sauvignon Blanc. We had fines herbes roasted shrimp with English peas (paired with a Loire Valley Chardonnay) and tender rack of lamb with crispy goat cheese fritters. Desserts were poached pear bread pudding with crème anglaise and a tangy lemon curd tart. It was a slow night, midweek and offseason at the restaurant, so we stopped in the kitchen after our meal to congratulate Chef Jordan Lloyd on his appearance at the James Beard House. He greeted us with flushed cheeks and a beaming smile. We visited in the spring, when the produce was just beginning. I have no doubt that in the fall, his dishes will be even more dazzling.

ROBERT MORRIS OXFORD
We were so happy when Mark Salter marched out of the kitchen at the Robert Morris Inn. I’d last seen him nearly a decade ago when he put on a wine dinner at his previous gig, The Inn at Perry Cabin. Now he and innkeeper Ian Fleming (no, not the author of the James Bond novels), own and operate the Robert Morris – named for its original owner, a signer of the Declaration of Independence and financier of the American Revolution. Lunch was being served on the sun-dappled patio, but we opted for the cool tavern, snuggling into a booth with glasses of chilled wine and beer. We started with a pairing of seasonal soups: fresh pea laced with mint and sweet crab, and the restaurant’s signature cream of crab. We nibbled on a basket of fried avocado wedges with a ramekin of chipotle aioli for dipping. Salter came by to refill our glasses so we’d hang around for the piece de resistance. He was awaiting a delivery of soft crabs, and they were on our plates shortly after they arrived squirming at the kitchen door. Oh, glorious spring! The crab cake was also delicious. For dessert, why not go for a multilayered Smith Island cake, this one in red velvet?* 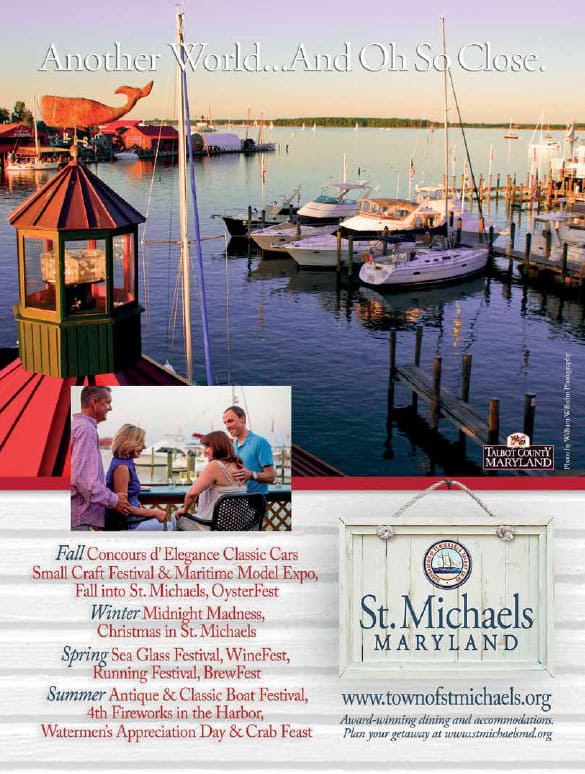 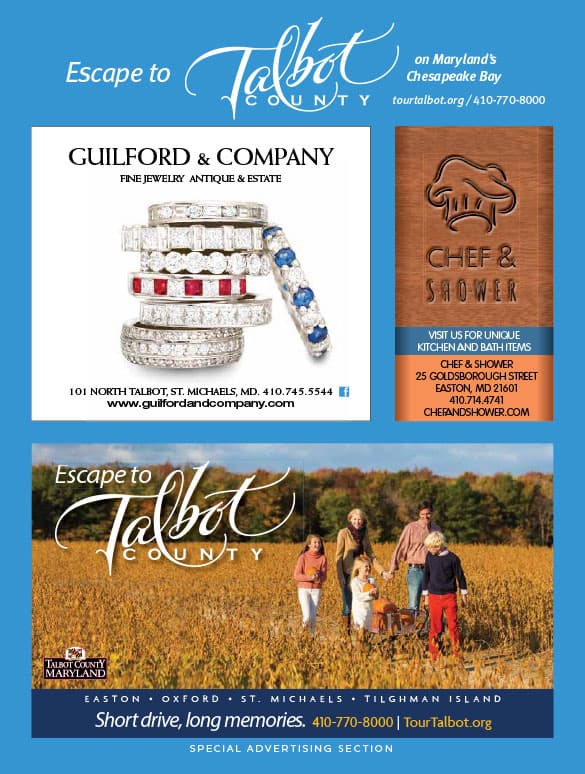